In the Amazon, Bolsonaro’s far right may retain power even if Lula wins

After four years of a government that led the Amazon rainforest and other biomes to record levels of destruction, the world’s attention is on the Brazilian presidential elections in October this year. Since the 1988 Constitution federalized most environmental policies, experts hold the current president, Jair Bolsonaro, responsible for the exponential increase in deforestation in the world’s largest tropical forest.

According to data released in August by the National Institute for Space Research (INPE), 31,000 square kilometers (11,969 square miles) were destroyed from January 2019 to July 2022 — an area the size of Belgium.

But another crucial election for the future of the Amazon is underway. Along with choosing the president, Brazilians will also go to the voting booths on October 2 to choose state governors and members of Congress. In the presidential race, polls point to a change of scenario, with the left-wing and former President Luiz Inácio Lula da Silva ahead of Bolsonaro on his reelection bid. Unlike Bolsonaro, Lula implemented policies that slowed the rate of tropical forest loss during his term (2003-2010). However, in the country’s northern region, which encompasses much of the Amazon, Bolsonaro’s ideas seem to persist, with voters siding with far-right governors who show little commitment to the environment.

Recent surveys by Datafolha and Ipec, two of Brazil’s most renowned polling institutes, show that candidates allied with Bolsonaro are ahead in the polls for governor in five of the nine Legal Amazon states: Acre, Mato Grosso, Rondônia, Roraima and Amazonas. Some of them have a chance at a first-round win. In Brazil, if a candidate receives more than 50% of the votes, he is elected in the first round. A second round is held a few weeks later if no candidate reaches a majority.

In three other states (Amapá, Maranhão, and Tocantins), there is a fierce dispute between supporters of the current government and candidates from other parties. The only state that stands out is Pará, where Helder Barbalho (MDB), a popular governor currently more aligned with Lula, is favored for reelection with 65% of the votes, according to polls. Zequinha Marinho (PL) — Bolsonaro’s candidate — comes second, with 13%. 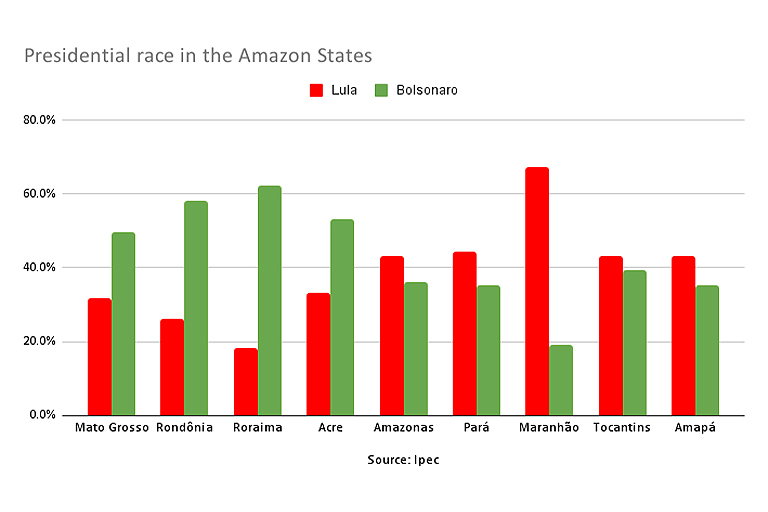 In Amazonas, the current governor Wilson Lima, a fierce Bolsonaro ally, has 30% of the voting intentions, with Amazonino Mendes close on his heels. The state led the deforestation areas in 2021, according to the Annual Report on Deforestation in Brazil 2021 (RAD21) by MapBiomas, a multidisciplinary network visualizing land use in Brazil through satellite imagery.

Polls show a similar pattern in Acre, a state that has seen record increases in deforestation and burning rates. Current governor Gladson Cameli, also a Bolsonaro ally, leads the contest with 51% of voting intentions.

In Rondônia, governor Marcos Rocha sees his reelection bid under threat. He has 30%, a short lead over ex-governor Ivo Cassol, who has 29%. There isn’t much difference between the two regarding the future of the Amazon: both are backed by Bolsonaro. Rondônia is the state that lost the most forest cover in recent years.

According to Leonardo Barros Soares, a political scientist and professor at the Federal University of Viçosa (MG), two other states that might suffer the consequences of another four years under a far-right agenda are Mato Grosso and Roraima. “The former is the state with the smallest proportional area of ​​protected land at the state level, and it is taking great strides to widen the arc of deforestation,” Soares told Mongabay by phone. “Roraima is home to the Yanomami and many other Indigenous peoples who have been tragically affected by the intensification of mining in their territory. What is happening in these states is tragic from an environmental point of view, and I don’t see how this scenario can change in the short or medium term,” he said.

In Roraima, Antonio Denarium, one of Bolsonaro’s strongest allies, has been implementing an agenda of anti-Indigenous policies and supporting illegal activities in the state. In July 2022, for instance, Denarium sanctioned a bill (PL 233/2022) that forbids the destruction of “private assets” seized during operations and environmental inspections. The new law aims to ensure that miners and loggers can recover the machinery seized in illegal extractive activities, which are often burned by authorities under federal legislation when there is no means to remove heavy equipment from the site. The bill is being challenged in courts.

The governor openly defends wildcat mining. In an interview in September, he reaffirmed that he intended to legalize it. “When I arrived here in Roraima 31 years ago, the monument in honor of the miners already existed in the Civic Center square,” he told a local TV station. “It is a centenary activity in the state of Roraima.” A report released in April this year by the Hutukara Yanomami Association, a nonprofit that defends the Yanomami people’s rights, showed that illegal mining already affected 56% of the Yanomami population in the state (about 16,000 people). Between 2020 and 2021, destruction by this activity increased by 46%. Denarium is ahead in the polls with 45% of the voting intentions.

“State disputes [in the Amazon region] are concentrated almost exclusively in the right-wing, historically linked to economic sectors and political elites that benefit enormously from environmental degradation in all its forms,” Soares said.

Lula and Bolsonaro tied at the Amazon

States from Legal Amazon are divided in the presidential race. According to the latest Datafolha poll, Lula leads with 45%, and Bolsonaro comes second with 34% countrywide. However, the two candidates are technically tied when only the nine Legal Amazon states are counted. In 2018 Bolsonaro won six states of the North region.

According to Soares, one of the reasons why Amazonian states often elect governors with right-wing connections is because the oligarchies that dominate local politics understand that these parties stand for weaker environmental legislation and institutions. “For them, the Bolsonaro government represented four years of extraordinary profits and maximum impunity. Making environmental laws more flexible and encouraging deforestation benefited many powerful people with money,” he said.

“In the past, for example, policies such as the Action Plan for the Prevention and Control of Deforestation in the Legal Amazon [PPCDAm] resulted, between 2005 and 2012, in reduced deforestation [80%] in practically all Amazonian states, regardless of the incumbent’s political orientation,” Moutinho said. “On the other hand, deforestation grows when there is weak, uncoordinated action between state and federal agencies.”

Moutinho said that the elected president will have an important influence on the future of the Amazon. Still, the real impact of October’s elections will depend on partnerships between state governors and the federal government. “Historically, the states tend to align with the central power and follow the federal policy in their regional guidelines,” Moutinho said.  “Therefore, it is not just a matter of whether the elected state government belongs to the left- or right-wing, but whether this alignment thrives. In other words, the federal government, regardless of ideological aspects, has relevant power in defining the environmental policy for the Amazon.”

This is why the election of Lula could be a turning point in the protection of Brazilian biomes, according to Suely Araújo, a senior public policy specialist at the Climate Observatory (OC), a coalition of 73 Brazilian civil society organizations, and former president of the Brazilian Institute of the Environment and Renewable Natural Resources. Araújo said that the left-wing candidate would immediately reestablish the PPCDAm and implement other environmental policies if elected.

“If Lula is elected, the federal plan for 2023 will probably be focused on the creation of employment and increase in income in the region, assuming that the forest is kept alive,” Araújo told Mongabay by phone. She said that Lula might also reestablish the Amazon Fund at the beginning of his administration. The fund has around $500 million, given mostly by Norway and Germany for conservation projects, and this sum has been lying frozen since January 2019 by Bolsonaro’s decision. “The hallmark of the Amazon cannot be illegal deforestation, unregulated mining and poverty. Positive results will come with a change of government, but it will not be an easy fight,” Araújo said.

“If Bolsonaro is reelected, however, I think we will have to say farewell to the Amazon biome as we know it,” said Soares from Viçosa University.

According to INPE, the Brazilian portion of the Amazon already lost 21% of its original cover, an area three times greater than the United Kingdom. The main drivers of deforestation are logging, illegal mining, land grabbing and other unlawful activities, largely benefitting from the lack of enforcement and punishment.

Banner image: Jair Bolsonaro with supporters in the State of Alagoas. Image by Alan Santos/PR via Flickr (CC BY 2.0).