Forest fires are getting worse, 20 years of data confirm

Across Russia, Europe, Indonesia, the Amazon Basin, North America, Australia, and beyond, we have watched fires blaze across landscapes, causing immense damage to life and land. Now, a new analysis confirms what many have witnessed firsthand and in the news: forest fires are getting worse.

Researchers at Global Forest Watch, an environmental monitoring platform developed by the World Resources Institute, reviewed 20 years of satellite data on tree cover loss to identify what they call stand-replacing fires, those that burn all or most of a forest’s living overstory trees. These may be caused by wildfires, fires escaped from agricultural burning, or fires set by humans.

Compared to 2001, fires are now causing 3 million more hectares (7.4 million acres) of tree cover loss per year, amounting to an area larger than Belgium. In 2021, fires were responsible for more than one-third of all tree cover loss for the year, making it one of the worst years on record.

Russia, Canada, the U.S., Brazil and Australia had the highest tree cover loss due to fire over the past 20 years.

The GFW analysis of fire data from the Global Land Analysis & Discovery (GLAD) lab at the University of Maryland was released Aug. 17 and built upon a study on forest loss due to fire from 2001 through 2019 published earlier this year. These analyses provide the most up-to-date and highest-resolution look at global stand-replacing fires.

“What was really surprising is how much things have changed over 20 years,” James McCarthy, a geospatial data scientist at GFW who worked on the analysis, told Mongabay.

Why are we seeing these changes?

While the expansion of human populations and agriculture are contributing factors, scientists say the climate crisis is primarily to blame for the increasing fire activity.

“We’re seeing hotter and faster fires,” Douglas Morton, a global fire expert and chief of the Biospheric Sciences Laboratory at NASA’s Goddard Space Flight Center, who was not involved in this research, told Mongabay. “We are seeing examples where climate change has increased the length of the fire season, allowing these fires to grow larger.

Of all fire-caused tree cover loss in the past 20 years, the majority (nearly 70%) occurred in northern boreal forests, according to GFW. Although fires are naturally occurring in boreal ecosystems (unlike in tropical rainforests), fire activity there has increased at a rate of 3% per year over the last two decades, and fires are burning with greater frequency and severity and over larger areas than historically recorded.

Last year, Russia experienced an unprecedented fire season, the worst on record, which burned an area roughly twice the size of Belgium.

“This record-breaking loss was due in part to prolonged heatwaves that would have been practically impossible without human-induced climate change,” GFW analysts and staff wrote in a post referencing the findings of a 2021 study published in the journal Climate Change.

Experts say this trend is troubling, as boreal forests store nearly twice as much carbon as tropical forests per hectare, with vast amounts of the greenhouse gas held deep in the permafrost soil and peatlands. As these forests burn, these reserves of carbon are released, furthering the fire-climate feedback loop. 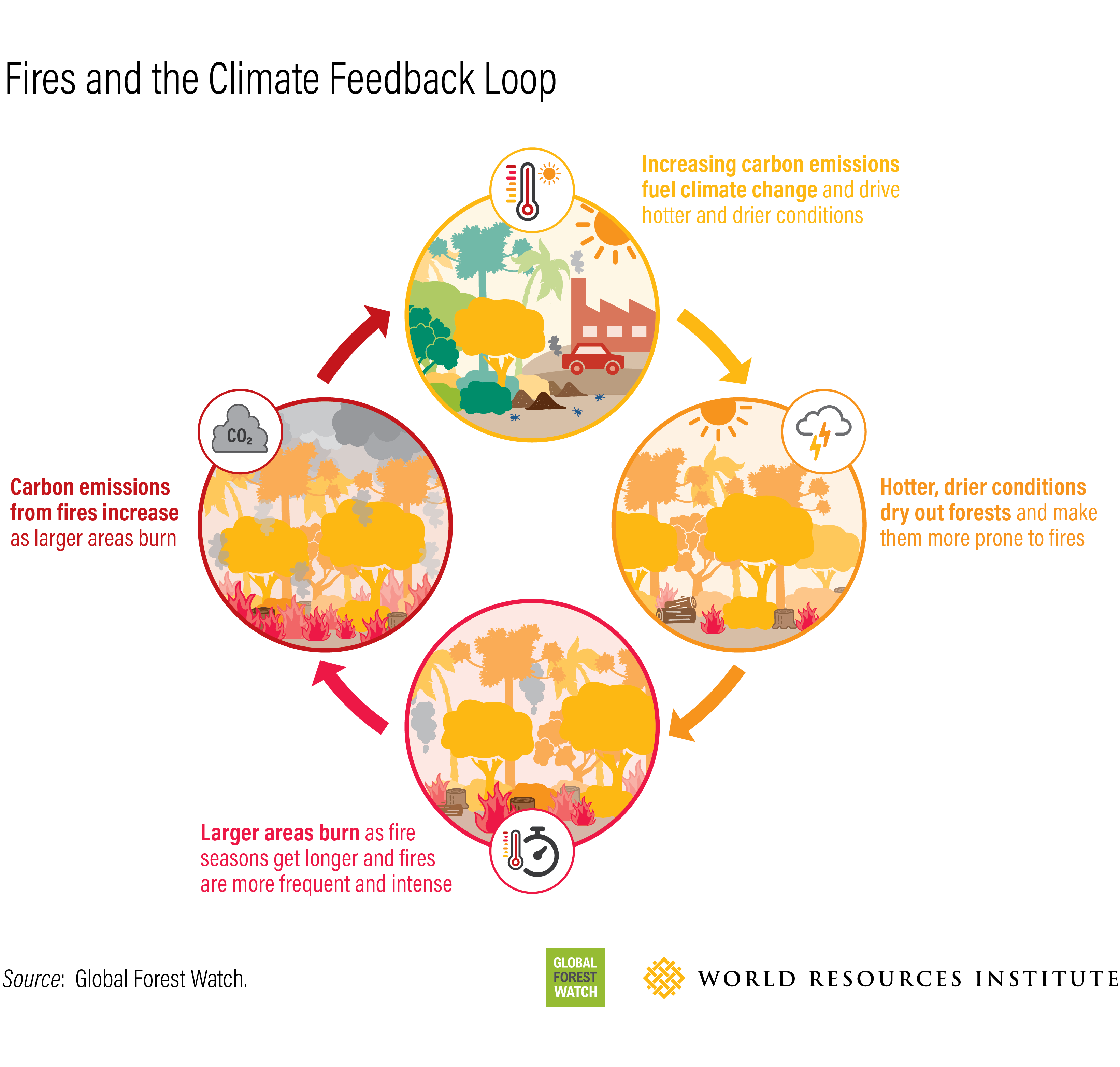 Forest fires in the tropics: An alarming new trend

In tropical rainforests, fires aren’t a naturally occurring phenomenon. Almost all fires there are set by people. In the Amazon, for example, most fires are set by farmers and ranchers to clear the land for beef, soy and other commodities. Trees and vegetation are cut, left to dry, and then set ablaze.

The GFW analyses does not include fires that follow deforestation, but another 2021 study, published in Global Change Biology, found that around 38% of global forest loss was associated with fire, including fires on land cleared for agriculture.

However, GFW’s findings support a trend that has been alarming tropical conservationists. In recent years, fires appear to be increasingly spreading into nearby rainforests. In 2020, for instance, 41% of major fires in the Amazon occurred in standing rainforest.

Deforestation and climate change have degraded and dried tropical forests, making them more prone to burning. As such, fire-related tree cover loss in the tropics has increased by roughly 5% (36,000 hectares, or 89,000 acres) per year over the past 20 years, accounting for around 15% of the global total, according to GFW analysis.

The risk of fire in the tropics is also heightened by El Niño events, which occur every two to seven years as part of a normal climate cycle. Because the Pacific Ocean is such a big driver of global atmospheric circulation, El Niño essentially shifts patterns of rainfall across the tropics, creating drier conditions across certain areas and making them more vulnerable to fire. 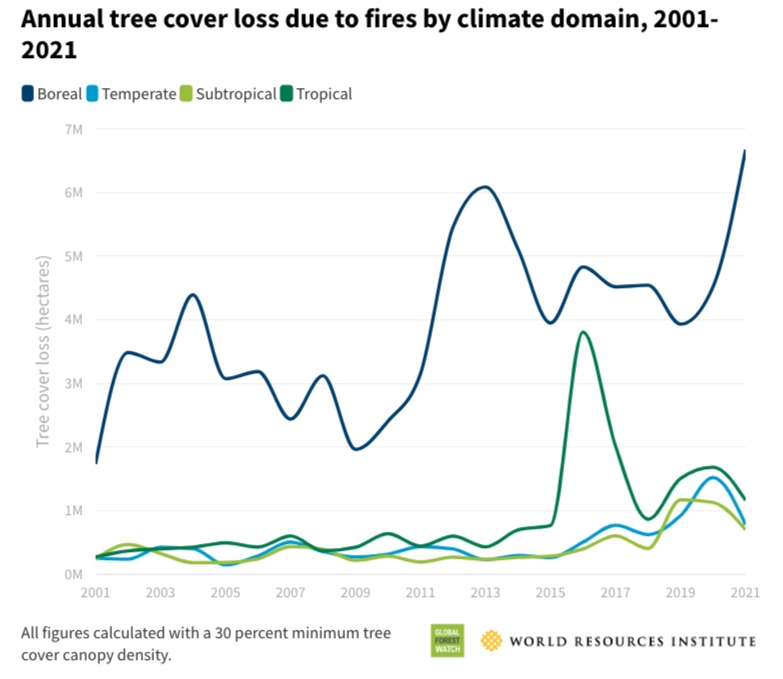 Can we reverse the trend?

A report released this year by the U.N. Environment Programme (UNEP) and GRID-Arendal predicts a global increase of extreme fires of up to 14% by 2030 and 30% by the end of 2050.

The report calls for a two-thirds increase in “spending devoted to planning, prevention, preparedness, and recovery, with one-third left for response.” At the moment, planning receives less than 1% of funding.

“Current government responses to wildfires are often putting money in the wrong place,” Inger Andersen, the UNEP executive director, said in a statement. “We have to minimize the risk of extreme wildfires by being better prepared: invest more in fire risk reduction, work with local communities, and strengthen global commitment to fight climate change.”

For example, Morton said, an El Niño event tends to drive conditions where fires are more likely in predictable places. “Those are the kinds of events that we understand and can anticipate.”

Although there is a wealth of information on how to manage and mitigate fires, “there is no ‘silver bullet’ solution,” analysts wrote in a World Resources Institute post, adding that strategies and priorities vary greatly by country and region.

Morton said data from fire monitoring platforms (such as GFW, NASA, MAAP, INPE, etc.) can aid these efforts, helping governments and agencies to predict and plan for fire prevention and response.

The global forest change dataset from the University of Maryland, Morton said, “is one of the most important contributions to our conversation around carbon storage and forested ecosystems and as a component of our strategy to combat climate change and increasing loss of forests from fire.”

“Essentially,” he added, “it points to the risk and vulnerability of those forests in a warmer, more flammable planet.”

Banner image: Krasnoyarsk, Siberia, is just one region where fires burned throughout Russia in 2020. Image by Greenpeace International.

Editor’s note: Mongabay has a funding partnership with the World Resources Institute (WRI) via the Forest Trackers project, which leverages Global Forest Watch data to quickly identify concerning forest loss around the world and catalyze further investigation of these areas. Mongabay maintains complete editorial independence over the stories reported using this data, and WRI has no editorial input on Mongabay content.