by Mohamed Fofanah on 7 September 2021

BLACK JOHNSON, Sierra Leone — Seated along the peninsula south of Freetown is the secluded village of Black Johnson. Rainforest covers the hills that rise behind it, home to chimpanzees and protected bird species. There’s a lagoon that serves as breeding grounds for fish, and sea turtles lay their eggs on the beaches nearby. This largely neglected town suddenly came to wider notice in May, when the government of Sierra Leone announced plans to build a fishing harbor here.

The announcement set off a clamor from environmentalists who argued that an industrial fishing harbor will threaten the ecologies of the beach and lagoon, and property owners apprehensive that government will dispossess them of their lands.

Balu Ibrahim, the information officer for Sierra Leone’s Ministry of Fisheries and Marine Resources, told Mongabay that in 2019 the ministry signed a memorandum of understanding with the Chinese government for the construction of a fishing harbor. She said the $55 million project includes a berthing and transshipment area for up to 15 vessels at a time as well as a shipbuilding and repair area. She noted that presently ships have to go to neighboring countries for repairs.

She said there would also be a fishery product processing area, including facilities for ice production and cold storage. But this MOU is not publicly available, and public knowledge of the details of the project rests solely on what the government is putting out to the public. 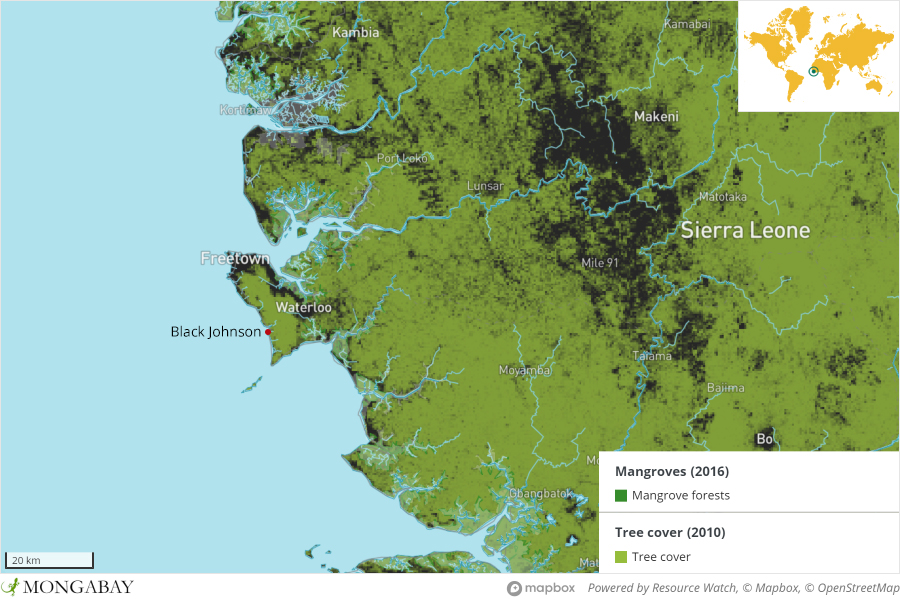 Ibrahim said Sierra Leone has one of the most productive fishing grounds in West Africa, with diverse and valuable fish stocks like shrimps and barracuda. The country’s small-scale fishers catch pelagic species, mainly bonga shad and herring, providing the most affordable sources of animal protein for Sierra Leoneans. The country’s waters are also exploited by more than 140 industrial fishing vessels that take their catch away to other countries for processing and packaging, with little benefit returning to Sierra Leone. The infrastructure proposed for Black Johnson aims to retain a greater share of profits from these marine resources.

Joe Rahall, the director of a local environmental NGO, Green Scenery, argues that while the project is well-intentioned, Black Johnson is not an appropriate location for this harbor. Rahall said a World Bank report rejected Black Johnson as a site for a harbor for reasons of environmental concern, adding he was surprised by the government’s announcement. “With no environmental due diligence, the Ministry of Fisheries and Marine Resources now finds that location as the most suitable place in terms of environmental issues.”

Other environmentalists say part of the area earmarked for development is a lagoon that’s a major breeding ground for many species of fish. They also say the project and increased traffic of large vessels will affect whales, dolphins, turtles and many bird species. They point out that the project site lies within Western Area Peninsula National Park, a protected area that shelters threatened species including giant pangolins (Smutsia gigantea), western chimpanzees (Pan troglodytes verus), and Jentink’s duiker (Cephalophus jentinki).

Tommy Gbandewa, a Black Johnson resident who owns a resort on the beach, said he was surprised the government would harm what he described as the huge touristic value of the area. Constructing a harbor here, he said, would “destabilize people’s livelihoods, the ecology and wildlife without due consideration.”

Not everyone in Black Johnson is opposed to the development. Abu Bakarr Kamara, the area’s tribal headman, as the local traditional authority is known, told Mongabay that most people here are stonebreakers or work as caretakers of land that has been purchased by Sierra Leoneans now living abroad. Construction of a harbor, he said, would create jobs for the community. “The village is impoverished. There are no schools, no hospitals, no pipe-borne water, no electricity and no market. And I am of the view that if there is development then these infrastructures will come to the community.”

Amara Samura, who grew up in the area, told Mongabay that opposition to construction of the harbor comes from the private property owners who hail from the capital, Freetown, and other parts of the country. He agreed with Kamara that Black Johnson’s largely unemployed locals supported the harbor because it will bring development.

Since news of the harbor project first broke, it has been widely believed that the project includes a fishmeal processing facility. More than 20,000 people have signed a petition calling on the Sierra Leone government to put an immediate end to it on this basis. The Black Johnson Land Owners Group says that fishmeal production is hugely damaging to the environment, decimating fish stocks for local fishers, discharging toxic chemicals, and destroying fish-breeding areas.

In the Gambia, further west along the Gulf of Guinea’s coastline, there is a major campaign against Chinese-owned fishmeal factories set up since 2016. The factories there are accused of dumping untreated waste into the sea, causing mass mortalities of fish and birds, while the smell of the processing plants has devastated local tourism. Many artisanal fishermen and women involved in fish smoking have lost their livelihoods. The tensions there have risen to the level of riots, with one factory burned down by youths protesting the industry.

But the fisheries ministry’s Ibrahim says opposition to fishmeal processing here is misplaced. “The serious backlash we have been having is the misconception that there is a fish farm or fishmeal embedded in the project. This is not true. We categorically state that the project will only cater for a fish harbor and not a fishmeal [facility].”

The outcry over the harbor proposal has attracted the interest of the Human Rights Commission of Sierra Leone (HRCSL), a body set up by parliament in 2006, after the civil war, with a mandate to promote and protect human rights in the country.

The HRCSL engaged the Ministry of Fishery and Marine Resources, community members in Black Johnson, and other stakeholders. Their findings revealed that the Ministry of Lands had conducted a survey of the proposed site at Black Johnson without the proper knowledge and involvement of property owners, contravening their rights to participation.

The commission also found that no environmental impact assessment has yet been carried out by the fisheries ministry for the proposed project. It said that without an EIA, it is impossible to properly assess the impacts of the project and put in place any necessary mitigation measures to protect the rights of members of the host community and the general public. It also recommended the government immediately engage with landowners in Black Johnson to begin negotiations over their property and adequate compensation.

Ibrahim told Mongabay that the project will use 100 hectares (250 acres) of land, of which 69 hectares (171 acres) are privately held, with the remaining 31 hectares lying in the sea. She said her ministry has asked landowners to take their land documents to the Ministry of Lands for verification so they can be compensated. She also said the fisheries ministry has started the EIA process.

James Tamba Kamara, the public relations assistant director of the Environmental Protection Agency (EPA), confirmed to Mongabay that no work on the site can begin until an impact assessment is completed and approved. He said the agency will issue a licence to operate “only when they would have conducted the EIA process and the agency is satisfied that it is relatively safe for the project to continue.”

The Chinese government has also come in for criticism for its role in the project. China is a major partner for infrastructure development in the country, and, according to the Sierra Leone Investment and Export Promotion Agency (SLIEPA), there are more than 30 Chinese companies operating in the country. The Chinese ambassador to Sierra Leone, Hu Zhangliang, has called for fair and neutral reporting of the Black Johnson harbor project. 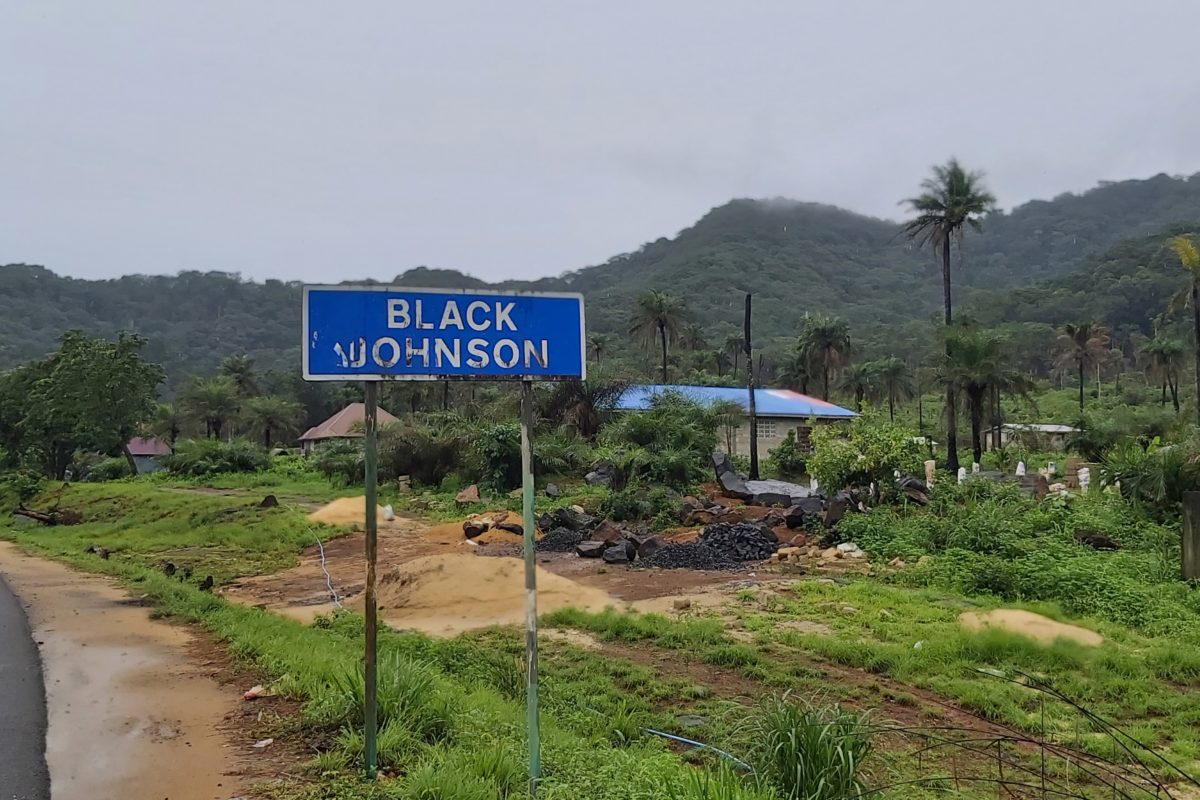