Getting hands-on with pollination can boost cocoa yields, study shows

Dark, milk, or somewhere in between, chocolate is a favorite treat all over the world. The Theobroma tree, the genus responsible for our cravings, thrives in shady, tropical regions.

But cocoa trees are a finicky sort. Producing the rugby ball-shaped fruits rests on the pollination of a tiny, centimeter-sized flower. And in natural conditions, a scant number of flowers are pollinated by insect visitors.

“I would say for the cocoa system, it is pretty normal that pollination of flowers is below 5 to 10%,” said Manuel Toledo-Hernández, an agroforester at Westlake University in China.

Small-scale farms produce the majority of cocoa and provide a major source of income for people in West Africa, the Amazon region, and Indonesia. To boost cocoa yields, farmers have traditionally turned to mainstream farming practices, which includes fertilizing the trees and spraying with insecticides.

But are these methods increasing cocoa yields? In a new study in Agriculture, Ecosystems and Environment, led by Toledo-Hernández, researchers compared yields from agrochemical treatments to hand-pollination efforts on cocoa trees in Indonesia. The team found the painstaking, hands-on approach not only increased cocoa yields, but also led to a boost in farmer income, even after the cost of labor was factored in.

Taking to the trees

In conventional cocoa farming, fertilizers and insecticides are used to encourage more pollination, and therefore higher cocoa yields. But Toledo-Hernández and his colleagues wanted to investigate a sustainable way to bolster cocoa crops without using agrochemicals. Specifically, they tested a more direct approach: pollinating by hand.

Toledo-Hernández was curious to know if hand pollination would work better than natural processes. If it triggered higher cocoa production, he said, it would be a good argument for farmers to embrace the sustainable, chemical-free approach as a way to increase yields.

Their experiment was also a way for farmers to directly compare hand pollination to conventional agricultural methods, including using insecticides and fertilizers. By looking at trees treated with hand pollination versus agrochemicals, Toledo-Hernández said farmers could see what methods might be worth investing in.

The researchers headed to the island of Sulawesi, where 70% of Indonesia’s cocoa production occurs. Toledo-Hernández and a small team, whom he jokingly called his “pollination army,” focused their hand-pollination work on 28 small-scale cocoa farms in the island’s Napu Valley.

The first step was to collect donor flowers from another area outside the testing site. “We collected many, many flowers — as many as we can,” Toledo-Hernández said. Like a special dessert you’d take home, the flowers were placed in a Tupperware container and taken to the study site. The flowers were divvied up among the pollination team, and the hand pollination began.

The process was meticulous. “You take one of your flowers, the pollen donor, then you rub the anthers into the style,” Toledo-Hernández said, adding that the team followed the methodology other scientists used in the past. For each flower, the pollinator completed three, circular turns of the donor anthers around the style to increase the amount of pollen grains transferred.

There was some trial and error with how to be most efficient with such a laborious process. First, Toledo-Hernández said he tried to pollinate using a brush (pictured below), but “I realized that will take forever.” He added that the team experimented with different approaches to get the most efficient method of pollination, and quickly settled into a rhythm.

“At certain point, you’re quite fast … you have a system,” he noted, adding that the repetitive process creates a meditative state of mind.

“You really need to know what you’re doing, because the cocoa flowers have a quite intricate structure,” said Mathil Vandromme, a cocoa researcher at Université Catholique de Louvain in Belgium, who was not involved in the study. “The flowers are a bit weird … the male parts are covered in hoods and the female parts are like in a cage,” she said, adding that hand-pollinating cocoa requires finesse and training to be successful.

For the study, the team included two different approaches for pollination: partial pollination of only flowers below 2 meters, or 6 feet (which was about 13% of all flowers in a tree), or full pollination of 100% flowers on a tree. They visited the trees over the course of 60 days, hand-pollinating daily.

At harvest time, the researchers looked at yields to see if their efforts had made an impact on cocoa production. They found that in the partially pollinated trees, there was a yield increase of 51% per tree. In trees where all of the flowers were hand-pollinated, the yields swelled to 161% over conventional methods.

But what about the bottom line? Even with the laborious efforts of hand pollination, Toledo-Hernández said farms that employed this method would still see a nearly 69% rise in income from the increased yields. “If I was a farmer and I needed to decide where to allocate my resources (for labor or for pesticides or fertilizers), at least in our study, we found that pollination may be more efficient, simply because it increased yields,” he said.

Vandromme said using fertilizers or pesticides is not a guarantee for increasing yields, but hand pollination can really boost cocoa production — and, therefore, profits. “I really liked that they looked at the economics of it and calculated exactly how much it would cost for farmers to hire people to come hand pollinate their flowers,” she said.

Hervé Bisseleua, director of agricultural productivity at the World Cocoa Foundation (WCF), agreed, noting the researchers highlighted the value of ecosystem services. “It has been a huge debate, for instance, on how to put a monetary value on ecosystem services like pollination,” said Bisseleua, who was not involved in the study. 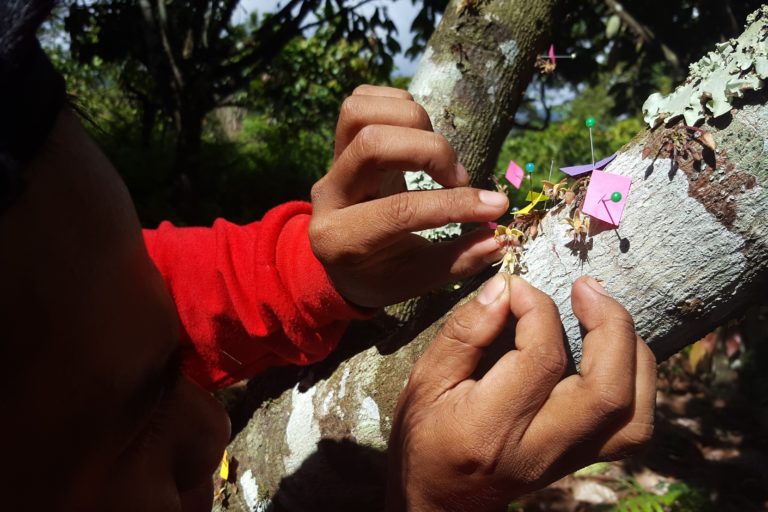 Bisseleua said he hopes the research will be tested in areas beyond Indonesia. “I think it will be good for other scientists to look at the paper critically … and see how to build on this research,” he said.

Vandromme agreed, adding that “they actually worked in a region that has a really high soil fertility,” she said, adding that that might be why fertilizers didn’t have much effect on yields. She said trying the experiment in an area with low soil fertility could tease out if fertilizer use could help cocoa yields elsewhere.

Toledo-Hernández said the findings may have significant impacts for small-scale cocoa farmers around the world. “I still have contact with those six people that helped me and they are still doing hand pollination,” he said, adding he is happy to see the impacts after he left. “To me, that is the real application: when this can be translated from experimental to the farm, and they can improve their livelihoods.”

Bisseleua said the paper is a “bold step in understanding pollination in the cocoa sector.” The WCF has started the Cocoa and Forests Initiative (CFI) to end deforestation and restore forests around cocoa farms. He said it’s a holistic approach that recognizes the interplay between ecological, economic, social and cultural factors. He said cocoa farming needs an integrated approach that considers productivity, biodiversity conservation, and the importance of ecosystem services.

As the push for sustainable chocolate continues, Toledo-Hernández said he hopes bigger companies will see the benefits of investing in pollination services. He said it’s a method that can be used alongside zero-deforestation initiatives. “[It] is not only about yields,” he said. “Food security, preservation of conservation of forest, biodiversity, climate change mitigation — there are many other important factors that we require to address while conducting agriculture.”

Banner: Reynold Rumapar, an Indonesian farmer who helped with the study, stands near cocoa pods growing on a tree he hand-pollinated. “Pollination is indeed very tiring, but the yields are very satisfying,” he said. Image courtesy of Manuel Toledo-Hernández.

Sarah Derouin is a freelance science journalist in based Michigan, U.S. Find her on Twitter: @Sarah_Derouin