by Naira Hofmeister on 9 July 2020 | Translated by Maya Johnson

An $85 million investment made by the World Bank’s International Finance Corporation in 2013 in the Brazilian meatpacker Minerva resulted in the rapid expansion of the company across Latin America. But seven years later, social and environmental compensation has not kept pace. While the company’s net profit tripled over the same period, the company’s promises to free its production chains of deforestation and slave labor have not fully materialized.

“Minerva has not strictly complied with its commitments to the environment,” Adriana Charoux, spokesperson for Greenpeace’s Amazon campaign, told Mongabay in an interview.

“They have not progressed on the topic of forced labor. Their attitude should be much more proactive,” according to Alex Praça, a member of the International Trade Union Confederation (ITUC), which is monitoring the company’s inroads into the Paraguayan Chaco.

The problems are interconnected and, in both biomes, are not exclusive to Minerva. But the Brazilian company’s market position as the leading exporter in Latin America — and the fact that it carries the seal of approval from the IFC — means there is greater pressure for results.

The IFC partnered with Minerva in September 2013 through two vehicles. First, it bought a 3% stake in the company for $25 million. Then, it offered a loan of $60 million to be paid back by the company over 10 years, by April 2023. More than half the debt had been paid back as of March 31 this year. 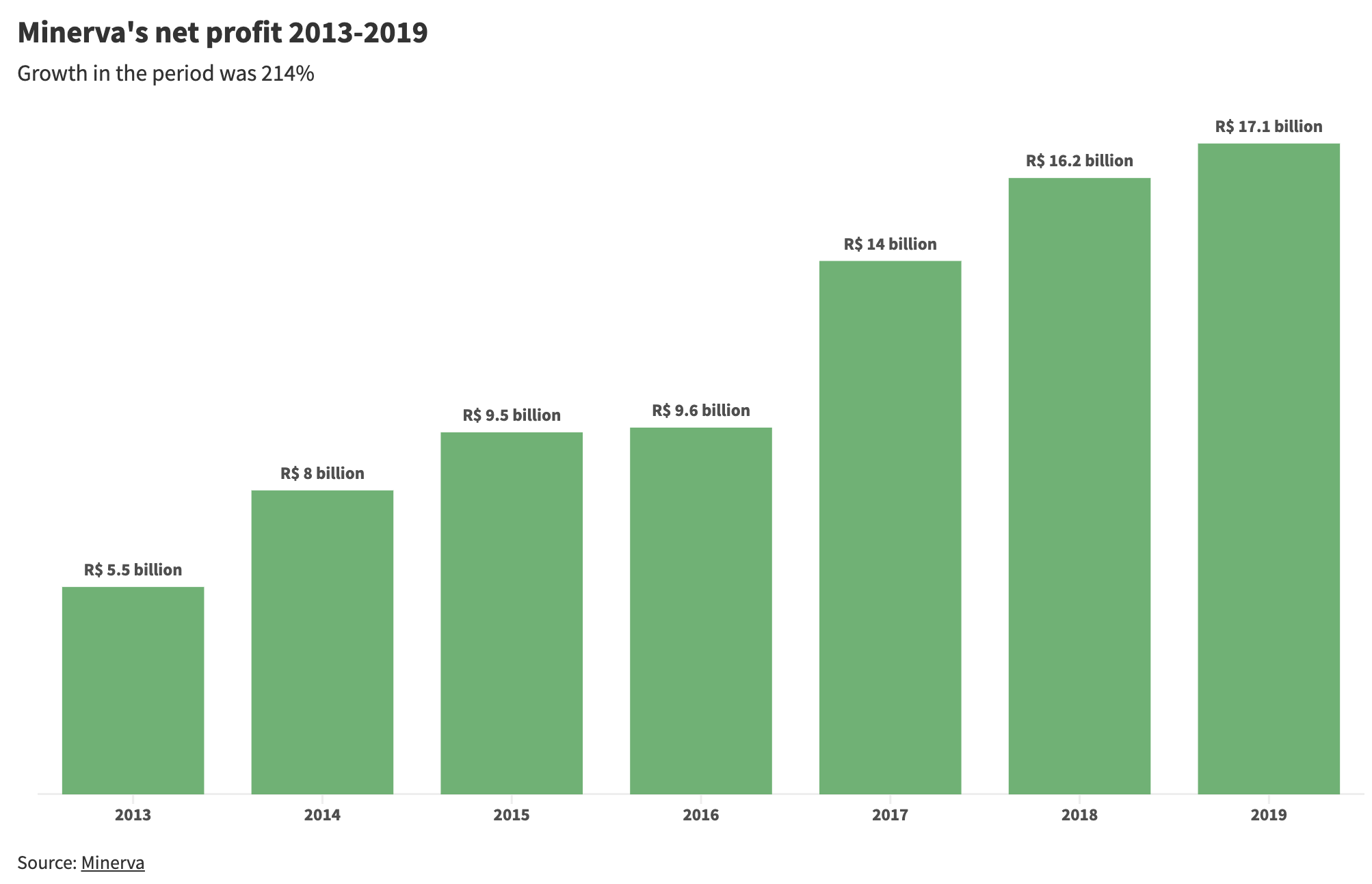 The investment was made following “many years” of discussions, the IFC previously told Mongabay. The bank was seeking to implement socioenvironmental standards that could assuage the negative experience it had had with its first foray into the Brazilian meatpacking industry. In 2009, it had to cancel a $90 million loan to the Bertin Group two years after the contract was signed, following the company’s involvement in the Federal Prosecutor’s Office’s Operação Carne Legal (Legal Meat Operation), which revealed irregularities in the Brazilian beef production chain and highlighted its main actors. Minerva was among them.

The new project was given a category A classification, the highest level of socioenvironmental risk accepted by the IFC. “Minerva’s activities in the Amazon and the Chaco could offer significant, irreversible risks resulting from their suppliers including deforestation, child labor, forced labor and invasion of indigenous lands,” the IFC noted on its disclosures website.

Seven years later, the same issues persist, despite the steps taken to mitigate risk. “Minerva has made radical advances in its numbers regarding health and work safety, environmental quality, atmospheric admissions, waste treatment. This is due to the IFC’s high bar, which often imposes stricter requirements than those stipulated by the national governments in the countries in which we operate,” said Taciano Custodio, Minerva’s head of sustainability. Today the company operates in Brazil, Paraguay, Argentina, Uruguay, Colombia and Chile. 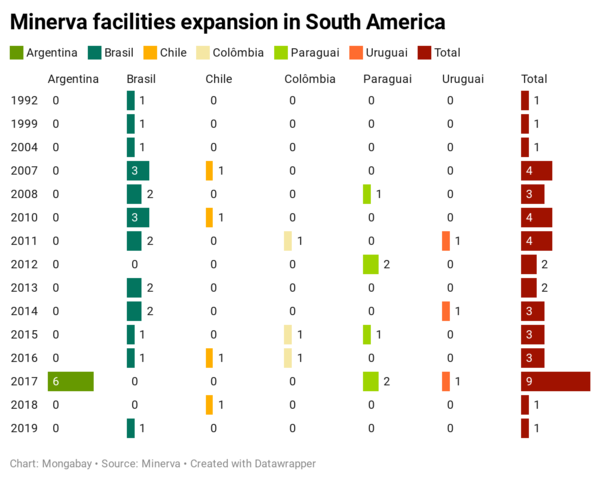 Old problems persist in the Amazon

In the Amazon, which produces 40% of the animals slaughtered or exported live by Minerva, the problem of tracking its production chain persists. Like other meat producers, Minerva reports the origin of its herd as being the last farm the animals pass through before slaughter. But this control isn’t enough in a system that includes a multitude of suppliers at various stages – from calving to feedlot – with varying standards.

The production chain can include everything from small, almost informal producers with few cattle and low production volume, to enormous farms where artificial insemination is the norm and modern techniques are applied.

“Indirect suppliers are those who take the young animals and sell them to a fattening farm where the animal will stay before it is sold to the meatpacker. We don’t know what goes on behind the gates of the previous farms,” says public prosecutor Daniel Azeredo, who heads the Amazônia Protege (Protect Amazonia) program inside the Federal Prosecutor’s Office and who led the investigations for the Legal Meat Operation.

The indirect supplier problem had was already on the radar in 2009, when Brazilian meatpackers signed the Public Cattle Raising Commitment. Under this sector-wide agreement organized by Greenpeace, the companies were obliged to “prove in a monitorable, verifiable and reportable manner that no indirect supplier which has cut down trees inside the Amazon biome beyond the date stipulated in this agreement, is included in its list of suppliers.”

The requirement was supposed to come into effect in 2011, but according to Adriana Charoux at Greenpeace, the companies “did nothing like it.”

“And they still say that they monitor 100% of their suppliers, which isn’t true because they monitor only the direct suppliers. Data from another meatpacker revealed in a seminar at the Global Roundtable for Sustainable Beef showed that 50% of the production chain comes from indirect suppliers,” she said.

Also, since 2009, control over indirect suppliers is laid out in the Conduct Adjustment Terms (CATs) promoted by the Federal Public Prosecutor’s Office following the Legal Meat Operation. “All the CATs reach indirect suppliers, as they require a clean environmental record from the time the animal is born. The problem is difficulties in monitoring and inspection,” said Ricardo Negrini, public prosecutor in the state of Pará. Cattle transport data in Pará are not available to the public, and the meatpackers say that not having this tool means they can’t monitor their entire production chain.

Given this scenario, an environmental and social plan of action was drafted between Minerva and the IFC, aimed at implementing a pilot project to improve the meatpacker’s tracking programs. “If it is successful, it will be a change of paradigm in the region,” the IFC said.

But seven years on, Minerva has had little success implementing the new standards. “We did some tests with properties in Rondônia [state], but unfortunately it wasn’t financially viable to completely track the animals and to scale the method,” Minerva’s Custodio told Mongabay.

The company said it is proud that it has “the greatest volume of farms and factories certified by the United States’ organic food protocol” — all of which rear calves from the time they are born until the adult animal is sent to slaughter, without passing through the hands of intermediaries.

Minerva said it is keen to make use of a monitoring tool, Visipec, which includes indirect suppliers. “We will be pioneers in the use of this technology,” Custodio said.

When a farm in Brazil is blacklisted because of illegal logging, it can keep supplying cattle to meatpackers by using illegal documentation. This is what the authorities refer to as “cattle laundering” and what may have happened with Minerva, according to recent evidence uncovered by nonprofit organizations.

On April 28, an investigation by Repórter Brasil and Earthsight revealed that one of Minerva’s suppliers in Rondônia had moved 54 head of cattle from an embargoed farm to a legal one immediately before sending the same number of animals to one of the company’s slaughterhouses seven minutes later.

The company said that “as a preventive measure, [it] has not maintained a commercial relationship” with the supplier, but that the second farm is still authorized for commercial transactions.

In early June, Greenpeace found similar movement between properties belonging to Minerva supplier Marcos Antonio Assis Tozzatti, one of which lies inside a protected national park in the state of Mato Grosso. “We will find the facts and, if any illegality is found, the appropriate measures will be adopted,” Minerva told Mongabay.

To make this type of operation more difficult, this month the Federal Prosecutor’s Office will bring in a measure to check whether farms are selling more cattle to the meatpackers than their productive capacity allows. Any excess of this number will be blocked.

In a response to Mongabay, the IFC said: “100% of Minerva’s direct purchases come from zero-deforestation regions of the Amazon biome.”

“The IFC believes that Minerva fulfills its commitments (related to direct suppliers) and is successfully applying a rigid buying policy to its main suppliers in accordance to our performance standards.”

However, an audit report from the Federal Prosecutor’s Office released in November 2019 showed that during 2017 the company bought 776 head of cattle from direct suppliers that could not provide legal documentation. While the purchases in 2017 only represent a small minority of its intake in Pará, it reveals the magnitude of the challenge that persists within the company’s supply chain.

According to Imazon, a Brazilian nonprofit focused on the Amazon, in 2017 Minerva had the 10th greatest risk of acquiring beef from deforested areas of the Amazon. An analysis based on data from Trase and the National Institute of Spatial Research (INPE) shows that between 2015 and 2017 Minerva bought cattle in 91 of the 100 most deforested municipalities in the Legal Amazon. Together, these municipalities where Minerva’s suppliers are located have lost 380,000 square kilometers (147,000 square miles) of forest since INPE has been monitoring the region — a region the size of Germany. A Trase study showed that two-thirds of all the logged areas in the Amazon each year become pasture.

In the Chaco, a vast region stretching from Bolivia to Argentina, the largest problem is Paraguayan farms. Although Minerva already has maps of 50% of the properties that supply its four factories in the country, cattle farming remains the main factor in local deforestation, according to monitoring carried out by the nonprofit Guyra Paraguay. The region is also subject to recurring conflicts and claims over the right to land from Indigenous peoples, in many cases in areas occupied by cattle farms.

Between 2012 and 2019, 22% of the biome disappeared, giving way to cattle farming activities. “It is an extensive activity in this region, with properties ranging from 2,000 to 300,000 hectares [5,000 to 740,000 acres],” Fabiana Arévalos, habitat and landscapes program coordinator at Guyra Paraguay, told Mongabay.

On a recent visit to the region, the United Nations gathered accounts of “many cases of forced labor.” An official study in 2015 by the Paraguayan government discovered that 75% of rural residents between 5 and 17 years old who worked on farms or cattle ranches were involved in “one or more forms of child labor.” But according to Alex Praça of the ITUC, “It has been very difficult to connect any reports from workers with corporate value chains because records of business relationships of farms with the meatpackers are not available.”

In Brazil, 32% of worker rescues from “slave-like” conditions happen on cattle farms, according to the Ministry of Labor (MPT). Two cases of worker exploitation that were taken to the Inter-American Court of Human Rights concerned enslaved men on cattle farms in Pará. “Unfortunately, we were not able to classify the supply chain as joint liability, that is only possible with outsourced labor. But we are moving toward taking that step,” Lys Sobral, national coordinator of slave labor eradication at the MPT, said in an interview.

In Uruguay, where individual traceability of the herd is a reality and labor unions are relatively strong, the problem lies in the relationship between organizations and their workers. “Since Minerva bought the meatpacker named Pul in 2011, we have had labor union problems at the company, constant attacks, including even a firing that was later reversed in court,” Luis Muñoz, secretary general of Federación Obrera de la Carne, the national labor union association, told Mongabay.

Banner image of a cattle farm in Novo Progresso, Pará, by Felipe Werneck/Ibama.