For one Indonesian fisher, saving caught turtles is a moral challenge

TAPULAGA, Indonesia — Over the past several years, Bakring, 56, has bought more than 20 live sea turtles. According to the law, each of these transactions could earn him five years in prison and a 100 million rupiah ($7,100) fine for trading in a protected species — far more than he makes in a year from fishing and aquafarming.

Indonesia is home to six of the world’s seven sea turtle species — all of which are classified as endangered or vulnerable by the IUCN — and the nation’s laws are meant to protect them from poachers. Bakring has the same goal. By buying turtles, he’s ensuring they don’t end up as someone’s meal or a piece of jewelry.

“If I don’t buy them, someone will definitely come along and offer to buy it to eat it. And if people keep doing that, they’ll go extinct,” he says from his home under the trees along Southeast Sulawesi’s coastline.

In Indonesia, government agencies tasked with protecting the environment are chronically low on funds. For Bakring, conservation is a hobby. The turtles he acquires are often injured, so Bakring feeds them until they are healed and releases them.

“The exploitation of sea turtles is still rife and alarming,” Bayu told Mongabay. “We’re very pessimistic that the problems facing sea turtles can be solved if the government and environmental NGOs don’t change their approach to turtle conservation.”

In North Sulawesi province, turtle meat is sometimes sold openly at markets, and studies indicate that people in villages across Sulawesi, an island the size of Florida, continue to hunt the animals. Some coastal communities also collect turtle eggs for food. Poached turtles end up on Indonesian dinner plates, and their intricately colored shells as bracelets and rings.

Poaching is one of the biggest threats, but an influx of garbage into their marine habitats also kills turtles, with some found dead with plastic trash in their stomachs. Some Hindu traditions in Bali include the sacrifice of turtles, but some priests have begun opposing the rituals or limiting the number of turtles used. Just this month in Bali, police stopped what they believe were two attempts to smuggle a total of roughly 30 turtles.

Bayu says this is just the tip of the iceberg, “where the actual number of cases of sea turtle exploitation is far more than reported.”

Even fishing equipment considered environmentally friendly can accidentally trap sea turtles and injure them, leaving fishers to decide what to do with them.

For as long as Bakring can remember, fishers who worked the same waters he did would eat sea turtles or sell them for up to 200,000 rupiah ($14) to people with a taste for their fatty meat. Most turtles, though, are caught by accident.

“Almost everyone knows that if they catch a turtle, they could be arrested,” said Abed Rizky Abdullah, the head of YARI, a local fishers’ advocacy organization. “But they do catch them, and they realize they’re holding a lot of money in their hands, so they sell.”

Sometimes, a turtle is eaten simply because a fisher doesn’t know how to get rid of it without attracting the attention of law enforcement, Abed said. But over time, fishers who may normally eat or sell to consumers have started coming to Bakring so they can still fetch the same price.

The turtles are often injured when they are caught accidentally in nets and traps used in deeper seas, so Bakring feeds and cares for them until they recover. 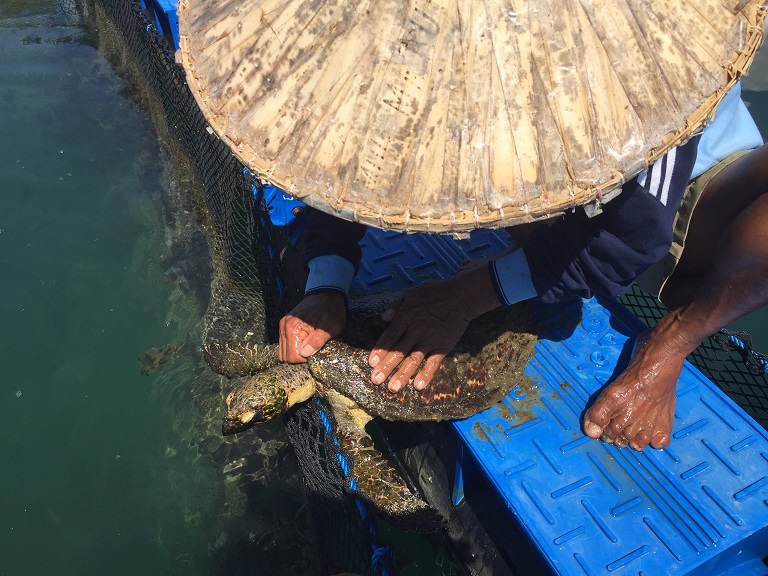 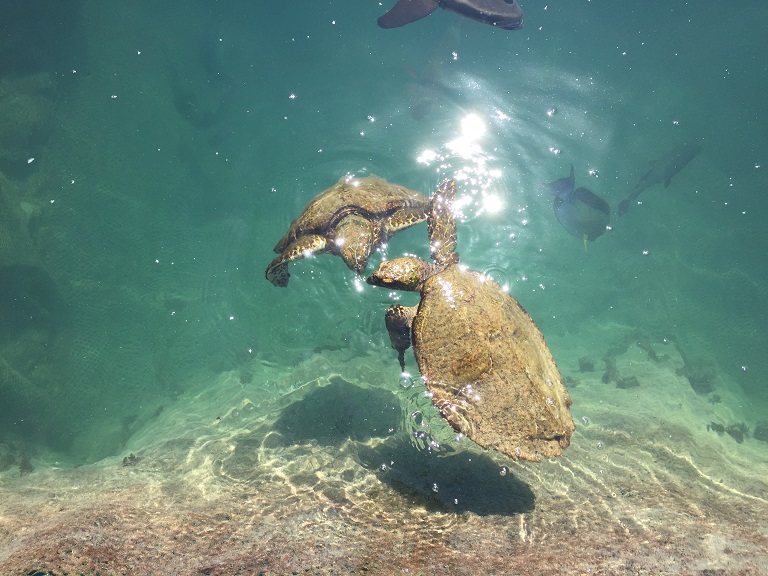 Four years ago, Bakring began offering to buy them, because, as he says, he didn’t want to risk their extinction. Prices can be high for one turtle, up to the equivalent of 10 to 15 meals for Bakring. The money comes out of his own pocket.

“I was concerned for the turtle’s life,” Bakring remembers of the first time he bought a turtle. “The nature around us can’t be measured with money.”

Bakring never married, nor does he have kids. He lives alone and has a pack of instant noodles for breakfast every morning. Three times a day he boards a boat fit for one passenger to fish or check on his floating cages of lobsters and fish. Once a day he brings leftover small fish to feed to the turtles. The local village government just deemed him poor enough to receive a free new house. It’s not finished yet, but on the porch he’s set up a small library of books on Islam and local marine life.

“This conservation can work if there’s someone like Bakring whose hobby it is to care for them, without needing monitoring or aid from the government,” says Yusnaini, a fisheries lecturer at Halu Oleo University in the provincial capital Kendari, 30 kilometers (19 miles) away from Tapulaga.

“He’s someone who doesn’t view the efforts in terms of money. It’s a moral challenge or even a source of happiness for him,” Yusnaini said.

After the turtles have been cared for, Yusnaini says, the healthiest thing for them is to be released, but it’s difficult to ensure that they are released in waters deep enough and remote enough such that they won’t become trapped again. Fuel to power a motorboat past fishing waters is expensive, and half the year on this Sulawesi coast facing the vast Banda Sea is defined by strong westward winds.

When he’s not able to release the turtles in deep waters, Bakring waits until he can gather a large enough crowd of locals, tourists, researchers, students, media and government officials for a turtle release closer to shore. That way, spreading awareness can be an additional achievement, and it’s clear to local government that release is the eventual goal. But he admits that he also likes having the animals around.

Bayu supports Bakring’s effort but isn’t sure it’s the right way to care for the turtles. Bakring hasn’t had training. He follows his own understanding of how to feed and clean them, but of the 20 or so he’s cared for, a few have died in the small 4-by-4-meter (13-by-13-foot) floating cage he has for fish.

“It depends, but in general they should be put in a large caged pool in the ocean. In a small cage, they are vulnerable to strong waves and it’s difficult to manage the water quality,” Bayu said.

Bakring’s turtle initiative grew out from a sustainable fishers’ group he founded that aims to join the goals of conservation and economy. They plant coral and keep giant clams, which Bakring says help keep the ocean clean. A few years ago, he registered a 100-by-100-meter (330-by-330-foot) area as a conservation zone with the government.

“Most of us are just thinking about money today, money tomorrow, because people have families and need to provide for them,” Bakring said. “But I created the group so that there will be a future generation who will know fishing and cultivation and care for the environment at the same time.”

Banner: A green sea turtle. Image by Rhett A. Butler/Mongabay.