A large mineral sands mine in southeastern Madagascar has trespassed into a “sensitive zone,” violating national law and raising the possibility that radionuclide-enriched tailings could enter a lake that local people use for drinking water.

There is no evidence that radioactive elements or mine tailings have entered the lake so far, but two recent studies confirmed the encroachment of mining activities into the lake. Rio Tinto, the London-based multinational that owns the mine, acknowledged the breach for the first time in a March 23 memo to the Andrew Lees Trust (ALT), a social and environmental advocacy group that commissioned one of the studies.

The breach raises health and safety concerns in one of Madagascar’s most impoverished regions. The lake, part of a forested estuary system a few miles from the city of Tôlanaro, commonly known as Fort Dauphin, serves as a fishing and foraging ground for people in nearby villages.

“It would be a human rights and environmental catastrophe if you flood that estuary with radioactive water,” Steven Emerman, a Utah-based geophysicist and hydrology consultant who authored the 2018 study commissioned by ALT, told Mongabay.

Emerman said he worries that a cyclone could cause tailings in the mining basins to overflow into the lake or seep in if the water table level changes. The mineral sands being mined have high levels of uranium and thorium, and the removal of the mine’s main product, ilmenite, can increase the concentration of radioactive elements. Ilmenite yields titanium dioxide, used as a whitener in products like paint and toothpaste.

A different study published today by ALT found safe radionuclide levels in rivers and lakes in the area. It also found that the area around the mine, including river water, had high levels of uranium that could pose risks to local residents, although it’s not known if these levels are naturally occurring or caused by mining activities. The author of the study noted that she had to rely on “limited” and “questionable” data provided by Rio Tinto, and called on the company to improve its monitoring and management of radioactive materials. In response to the study, Rio Tinto maintained that the high uranium levels were naturally occurring and cited a baseline study as evidence.

Emerman and Rio Tinto have sharply different opinions about how best to protect the lake from mine tailings. Rio Tinto has set a barrier in place, but in his study, Emerman writes that the safety criteria that the company used to build it would be more appropriate for “storm drains at a shopping mall parking lot” and that reading Rio Tinto’s reports leads him “to believe that the dam was not designed to meet any safety criteria, but was simply ‘designed’ by piling up sand with a bulldozer.”

Emerman expressed further concern that the dam itself was made largely out of tailings — a fact acknowledged by Rio Tinto. This could contribute further seepage into the lake that the dam is meant to protect. “If you build the dam out of tailings, what good is the dam doing?” Emerman said to Mongabay.

Rio Tinto has initiated an action plan to assess and possibly redesign the dam (or berm — there’s debate about what to call it) before the end of the year, the company said in the memo.

In 2018, Rio Tinto commissioned Ozius Spatial, an Australian consultancy, to determine whether mining activities had breached the lake and buffer zone, as ALT had claimed. Like Emerman, Ozius found that the company’s mining activities had encroached not only all the way through the buffer zone on one side of the lake — littoral forest made up of unique evergreen species — but onto the lake bed.

Rio Tinto declined to publish the Ozius study and has not acknowledged the breach publicly, aside from its communications with ALT. The company did provide a copy of the Ozius study to ALT so that Emerman could use it is in his work. Neither Rio Tinto nor Ozius responded to requests for comment for this article.

It is unclear whether Rio Tinto’s encroachment into the lake was intentional. In its recent memo, Rio Tinto called the breach an “unintended occurrence that has produced several important learnings.” However, the company had been aware of the possibility of a breach for several years. In 2014, it asked Madagascar’s National Environment Office (ONE), a regulatory body, for permission to change the buffer zone around the lake from 80 meters (262 feet) — the standard, per national law — to 50 meters. ONE granted the request. Yet the Ozius study shows that by the start of 2014 Rio Tinto had not only already worked its way through the buffer zone but had encroached 52 meters into the lake itself, according to Emerman, who reproduced this finding in his own study. (See illustration caption for more details.)

ONE inspected the breach in August 2018, deemed its impact “negligible” and chose not to take regulatory action, according to Rio Tinto’s recent memo to ALT. 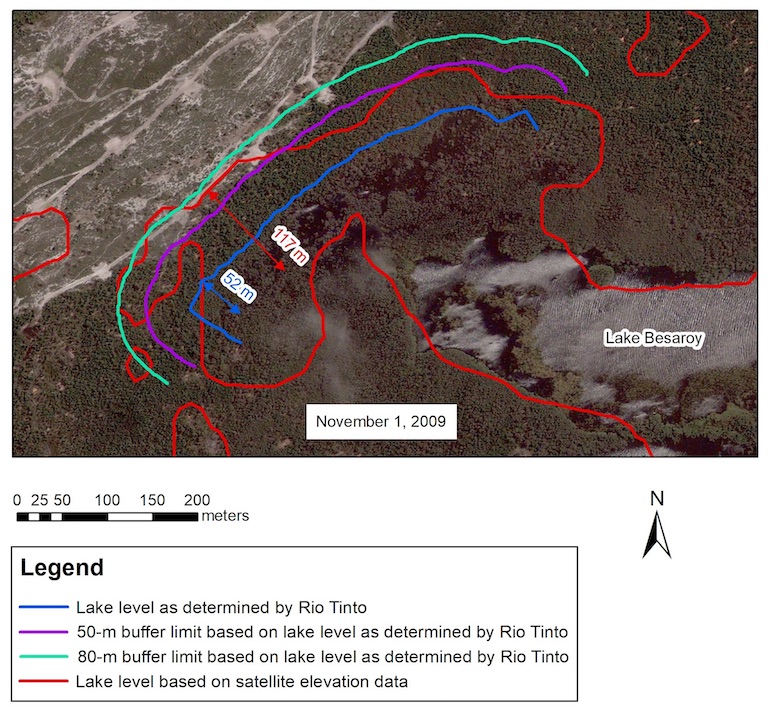 Financial considerations appear to have driven Rio Tinto to mine near the lake, where the highest-quality ilmenite in the area occurs. In a 2017 memo to ALT, Rio Tinto explained its actions from a dollars-and-cents point of view. “The impact of complying with the 80m buffer zone would be 1) A 9 % loss of Reserves; 2) a non-optimal life of mine plan, the higher grade and lowest cost ore to the North East would only be accessible at the end of the mine life.”

In Madagascar, Rio Tinto operates through QIT Madagascar Minerals (QMM), which is 80 percent owned by Rio Tinto and, at least on paper, 20 percent by the government of Madagascar. QMM is the second-largest mining operation in the country. Rio Tinto has invested more than $1 billion in the project and sends most of the ilmenite to be processed in Canada. The company shipped its first batch of ilmenite in 2009 and operations could continue for 40 years across three sites, including places that border protected areas. Operations are currently underway only at the Mandena site, which breached the estuary system. (The estuary system is now a freshwater wetland, as Rio Tinto built a weir to close it off from the ocean before it began mining.)

Critics have questioned ONE’s independence and ability to act as a neutral regulator. ONE’s website lists Rio Tinto alongside the World Bank and the European Union as a financial backer. And because of government funding issues, Rio Tinto has to pay for the regulatory body’s staff to fly down from the capital, stay in local hotels and monitor the company.

“This sets up an obvious conflict of interest that no one is happy with, including QMM,” Pete Lowry, a Paris-based botanist with the Missouri Botanical Garden who has decades of experience working in southeast Madagascar and sits on QMM’s biodiversity and natural resource management committee, told Mongabay. “But the reality is that if monitoring is going to get done, QMM is going to pay for it.”

A ONE representative did not respond to a request for comment for this story.

Rio Tinto will hold its annual general meeting in London on April 10. Yvonne Orengo, ALT’s director, owns one share of the company and said she hopes to speak about what’s happened at the lake.

“It’s taken the Trust [ALT] two years and a huge effort to get Rio Tinto to admit the breach,” she told Mongabay in an email. “This highlights just how difficult it is for local people to hold QMM to account when it does wrong or fails in its obligations.”