OK, Google: Has the general public lost interest in biodiversity conservation? Has people’s interest in environmental issues been overshadowed by climate change alone?

The answer to both questions, according to Google searches at least, is “No.” Public interest in both conservation and climate change seems to be rising, a new study has found.

At first, Zuzana Burivalova, a tropical forest ecologist at Princeton University who was also the lead researcher on Mongabay’s Conservation Effectiveness series, and Rhett Butler, Mongabay’s founder and CEO, wanted to find out which conservation strategies were getting more popular over time, and which ones were simply fads.

But then, some conservation scientists echoed a common sentiment: public support for conservation had been waning in general, and what limited “bandwidth” the public had for environmental issues was being dominated by climate change.

Burivalova also observed that politicians in many countries were moving environmental issues further down on their list of priorities. This would “reflect that perhaps people care less about the environment,” Burivalova said, “and so I was interested to see whether that’s really the case.”

To find out, Burivalova, Butler and David Wilcove, a professor of ecology at Princeton University, turned to the internet. Google searches can be a window to what people are curious about. Google Trends, which measures these searches over time, can in turn be a proxy measure of what the general public is interested in or wants to know more about.

The problem with this is that it shows only the relative popularity of a search term — that is, for a given region and a given time period, say a month, it calculates the ratio between the number of searches for the queried term (“biodiversity”, for example) and the total number of all searches in that month. It then adjusts these ratios on a scale of 0 to 100, where 100 represents the point when the ratio was the highest. This highest relative point may not necessarily coincide with the month that had the highest absolute number of searches for “biodiversity”.

Burivalova, Butler and Wilcove, were in fact interested in the absolute numbers.

“In the context of the sharp rise in search queries over the past 20 years, absolute numbers give you a better picture of user interest in a topic,” said Butler. “Over time, the Internet has moved from the domain of experts to mainstream. Therefore the share of searches on technical and scientific terms may decline on a relative basis, but the absolute number of searches on those terms is actually increasing.”

So Burivalova and colleagues developed an algorithm to “back-correct” the Google Trends data and get absolute monthly search volume estimates. These, too, were scaled between 0 and 100, but in this model, 100 represented the month with the highest absolute number of searches for the search term, and not ratios. The team also compared search volumes for conservation-related terms, such as “biodiversity” or “endangered species,” with those for climate change-related terms like “global warming.”

The rise of interest in climate change and global warming, according to Google searches, began in 2007. This increase is possibly liked to the 2006 release of the climate-change documentary film “An Inconvenient Truth,” the authors say. Interest in climate change “has since caught up with, but not displaced, interest in biodiversity conservation, with interest in the two topics eventually attaining similar levels over the past 5 years,” they write in the paper.

“The overall conclusions are surely right, even given the difficulties of back-correcting the Google Trends data to get absolute numbers of citations,” Stuart Pimm, a professor of conservation ecology at Duke University in the U.S., who was not involved in the study, told Mongabay. “Yes, there is more coverage of biodiversity and yes, it correlates with climate warming. Indeed, the back-corrected estimates show a spectacular rise of interest.”

Burivalova said she was especially surprised by how conservation was quickly becoming an important search topic in East and Southern Africa, as well as India and Nepal. “I had never thought that people in a particular country would, by default, care more or less about our environment,” she said. “What I was surprised by was how important the role of internet seems to be in conservation in these countries.” 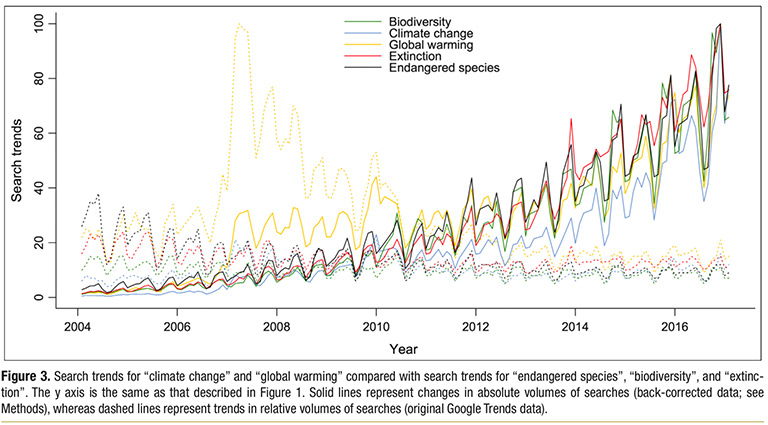 “It could be that the people are truly interested in conservation, but they could have other motivations,” Burivalova said. “Using the example of a pangolin, people could Google pangolin to find out what it is, and how to protect it, but also where to buy pangolin meat.”

Google Trends results may also be skewed toward countries and regions whose residents have access to Google — typically more affluent or urbanized areas.

Despite these limitations, Google Trends data seem to suggest that conservationists must continue to communicate their results, Burivalova said, so they can reach out to all the people who are interested in conservation and environmental issues.

Editor’s note: Rhett A. Butler is Mongabay’s founder and CEO. Zuzana Burivalova was the lead researcher on Mongabay’s Conservation Effectiveness series published in 2017 and 2018.

Header: Collage of nature images by Rhett A. Butler/Mongabay.