California Governor Jerry Brown has done nearly everything within his reach to solve climate change. When he hosts the Global Climate Action Summit in San Francisco in September, he can be rightly proud to showcase California’s achievements: bold climate legislation, a more fuel-efficient state vehicle fleet, and international partnerships to “decarbonize” economies around the world.

But surprisingly, he has yet to seize one of California’s best opportunities to slow climate change: tropical forests. Governor Brown has the opportunity to unleash one of the world’s most cost-effective climate solutions using the global influence of California’s climate policies, increasing the impact of the Action Summit in the process.

Tropical forests can help solve climate change in two ways. Protecting forests from being cleared and degraded keeps carbon in trees and out of the atmosphere. Letting them recover following logging, fire or clearing speeds up the removal of carbon from the atmosphere. Scientists estimate that ending tropical forest destruction and allowing damaged forests to recover could contribute one fourth or more of the emissions reductions needed by 2030 to avoid dangerous climate change.

And let’s not forget that protecting tropical forests would safeguard the homes of thousands of indigenous peoples and other forest-based communities. 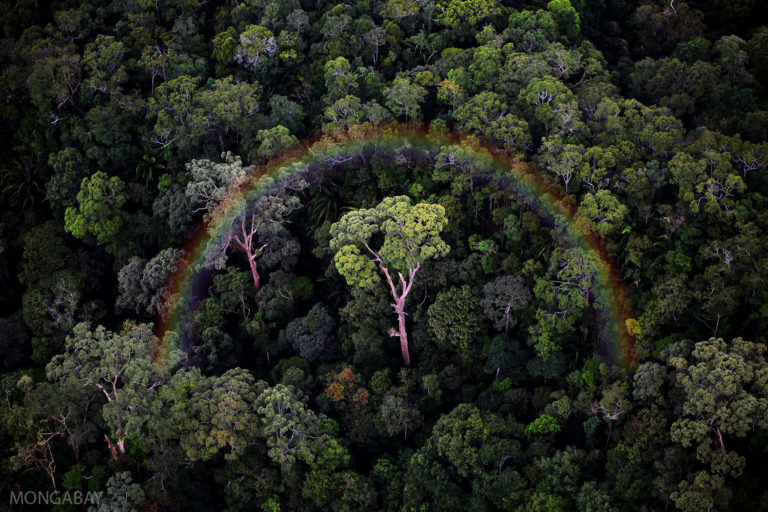 So how can Governor Brown use California’s global influence to help keep tropical forests standing?

The short answer is this: by showing the governments of tropical forest regions that their efforts to slow deforestation and speed forest recovery will be recognized and rewarded.

For the last decade, many tropical governments have been doing their part. Brazil, for example, has already kept more than six billion tons of carbon pollution out of the atmosphere by drastically reducing deforestation of its Amazon forest. They’ve avoided twenty times more carbon pollution than California hopes to achieve by 2020.  They did so while growing more food on the land that was already cleared, and by expanding the area of formally-recognized Amazon indigenous peoples’ territories.

Brown has a golden opportunity to recognize and reward the progress made by Brazil and other tropical forest nations, provinces and states. The most important thing he could do is to bring tropical forests into California’s world-famous climate change program–the “Global Warming Solutions Act”, expanded in 2017 under his leadership.

The tropical forest component of California’s climate program has undergone extensive review and public consultation over the last decade and is now ready for implementation. It would pay for carbon pollution reduction achieved across large tropical forest states and provinces. For example, the State of Acre in the Amazon region of Brazil has slowed deforestation 60% and is on track to keep 300 million tons of carbon pollution out of the atmosphere by 2020–about the same as California will achieve. The Acre government is also providing direct financial and technical support to the 24 indigenous nations and other forest communities that reside in the state, meeting an important requirement already established by California.

This would build on the success of California’s domestic forest program, which has already delivered $800 million to 16 projects across the US that are reducing carbon pollution. More than half of these projects are led by indigenous peoples, delivering benefits that go far beyond climate change. As Javier Kinney, Self-Governance Director of California’s Yurok Tribe described recently, they are using the funding from California’s climate change program to buy back some of their ancestral lands and sacred artifacts and to restore their forests.

The positive impacts for tropical forests would extend well beyond the relatively modest amount of money that would be likely to flow to them from California. As the first regulated market for the reduction of carbon pollution from tropical forest regions, it would establish a very important precedent. Other states, provinces, nations and even companies would be more likely to follow California in buying tropical forest carbon emissions reductions, and to follow the high standards of social and environmental integrity that the California Air Resources Board has established for this program. The mere creation of the program would send a clear message to the states and provinces of tropical forest regions that their efforts to slow tropical deforestation are recognized.

There are benefits to Californians, too. Bringing tropical forests into California’s climate policy would help avoid sharp increases in electricity prices as energy companies implement measures to dramatically reduce their carbon pollution as California’s cap on emissions ratchets downward. And by helping to keep tropical forests standing, California would also be lowering the long-term risk of climate change.

On the eve of the Global Climate Action Summit, Governor Brown will host the tenth annual meeting of the Governors’ Climate and Forests Task Force, a global network of states and provinces created in Los Angeles in anticipation of California’s tropical forest program. Thirty five member governments from Brazil, Colombia, Ecuador, Indonesia, Ivory Coast, Mexico, Nigeria, Peru, Spain and the United States will be in San Francisco for this Task Force meeting.

What better opportunity than this for Governor Brown to burnish his climate legacy?

Daniel Nepstad, PhD, is the President and a Senior Scientist of the Earth Innovation Institute and a Lead Author of the Intergovernmental Panel on Climate Change, Fifth Assessment.

Chris Field, PhD, is the Director of the Stanford Woods Institute and Co-Chair of the Intergovernmental Panel on Climate Change, Working Group 2, from 2008 to 2015

Jonah Busch, PhD, is Visiting Fellow at the Center for Global Development, and co-author of “Why Forests? Why Now?”