by Mongabay Latam on 26 July 2018 | Translated by Sarah Engel

If the locations of illegal activities were marked on a map, the magnitude of the illegal mining and drug-trafficking problems in Peru’s Bahuaja-Sonene National Park would be obvious.

The natural protected area covers 10,900 square kilometers (4,200 square miles) and mainly includes the rainforests of the Puno region in southern Peru, as well as the southern part of the Madre de Dios region. The park protects “the only display of the tropical savanna climate in Peru and its characteristic wildlife,” according to the National Service of Natural Protected Areas (SERNANP).

But this protected area is in danger. Illegal mining and drug trafficking are taking place in the park’s buffer zone and, in some cases, have even crossed into the park. According to the U.N. Office on Drugs and Crime (UNODC), Bahuaja-Sonene National Park has the world’s highest amount of illegally cultivated coca within a protected area: 118 hectares (290 acres) are growing within the park. Local authorities say that due to drug trafficking, about 473 hectares (1,170 acres) have been deforested within the park, an area nearly one and a half times the size of New York City’s Central Park. 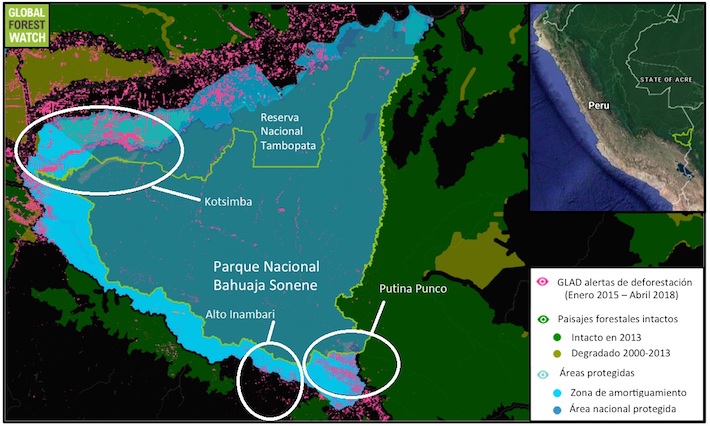 Pedro Gamboa, the director of SERNANP, says the issue has become a threat to park rangers’ lives, forcing one of the directors of the national park to resign. An unauthorized airstrip has even been identified within the protected area, according to a 2015 report by SERNANP.

Illegal mining, meanwhile, continues to take place in the northern and southern parts of the park. Alto Inambari is a district in Puno region at the southern end of Bahuaja-Sonene National Park. In late 2017, the provincial attorney specializing in environmental matters in Puno identified 18 points of illegal mining adjacent to the park’s buffer zone in Alto Inambari. The high number of gas stations installed in the area is also evidence of fuel trafficking.

In the northwestern part of the protected area, because of illegal mining, at least 5 square kilometers (1.9 square miles) of traditional Kotsimba land have been deforested in and along the shores of the Malinowski River. This has greatly impacted the area’s population of giant river otters (Pteronura brasiliensis).

The illegal operations at the head of the Malinowski River have impacted the migration patterns of this endangered species. “The otters have become isolated in the Heath River, the only part of the park that does not have the threat of mining” Araníbar said.

Authorities, residents and experts say the expansion of these crimes in and around Bahuaja-Sonene National Park is a consequence of the “balloon effect.” This refers to the idea that audits and sanctions carried out in one place often result in the illegal activities appearing somewhere else.

Illegal coca crops in Putina Punco district, which lies in the mountainous rainforest of the Puno region, have increased from 16.6 to 28.8 square kilometers (from 6.4 to 11.1 square miles). According to authorities from the National Commission for Development and Life Without Drugs (DEVIDA), this increase coincides with an increase in the elimination of coca crops in the valley of the Apurímac and Ene rivers. It also coincides with the massive influx of migrants from the Ayacucho and Apurímac regions into Sandia province in the Puno region.

Authorities from DEVIDA say they have even detected patterns similar to those observed in the valley of the Apurímac and Ene rivers. Large families have taken control of various sectors of the district, including laboratories for cocaine and cocaine paste located just a few meters from the coca plantations. Many coffee growers around the park, who have refused to grow coca, live in fear.

In addition to the “balloon effect,” there is another issue in Sandia province: a fungus called coffee leaf rust that attacks coffee plants until they dry up. In 2012, there were 84 square kilometers (32 square miles) of coffee being grown in the area; in 2017, only 23 square kilometers (9 square miles) remained. The coffee farmers in the buffer zone of Bahuaja-Sonene National Park depended on their ability to grow coffee, but after this crisis, many chose to pursue another source of income. Many found an easy way out by switching to the cultivation of coca.

The illegal mining in Alto Inambari has a similar explanation. Authorities say one of the triggers was the series of sanctions against illegal mining between 2009 and 2012 in Madre de Dios. This provoked the displacement of the mining population toward areas such as Quincemil, in the Cusco region, and San Gabán and Alto Inambari, in Puno. It was also discovered that sanctions in Ananea district, in the highlands of Puno, also provoked the migration of miners from there to Alto Inambari.

The story in Kotsimba is unique, but neither the authorities nor the residents can ignore the environmental disaster caused predominantly by almost 10 years of illegal mining. Although mining operations with their backhoes and front loaders have become part of the landscape of the community, there is also an interest among residents to abandon illegal mining within a year and to dedicate the community to ecotourism activities.

This story was first published on July 19, 2018, by Mongabay-Latam.