‘A major concern’: plantation-driven deforestation ramps up in Borneo

by Morgan Erickson-Davis on 10 September 2016

Borneo, home to animals like orangutans, rhinos, elephants, and proboscis monkeys is also host to some of the fastest plantation expansion in the world. Now, a new study published yesterday in Nature’s open access journal Scientific Reports examines how much of this expansion has been happening at the expense of primary forest. It finds that plantations in Indonesian Borneo have historically driven less deforestation than researchers expected – but this seems to be changing.

Borneo is the planet’s third-largest island, demarcated by three countries: Indonesia, Malaysia, and – occupying a tiny corner of the Malaysian side – Brunei. Its relative geographical isolation has led to the evolution of unique species, with 44 of its more-than 200 known mammals endemic to the island, meaning they’re found nowhere else in the world. Along with Sumatra, Borneo is the only place on Earth where elephants, orangutans, and rhinos coexist. Its mountainous rainforest comprises at least 15,000 plant species, of which 6,000 are endemic.

But the rich biodiversity of Borneo’s forests is under increasing pressure from industrial agriculture and other human activities. Commodity crops like eucalyptus and oil palm plantations are competing with native forest for land, with plantations often winning out as global demand for wood pulp and palm oil climbs. While the palm oil industry is spreading across the globe to new frontiers in South America and Africa, Indonesia and Malaysia are still its primary producers, yielding an estimated 85 percent of the world’s supply in 2013. Palm oil is an ingredient in a multitude of products, from cookies and toothpaste to lipstick and conditioner.

The demand for palm oil (along with wood pulp and timber) has contributed to significant land cover changes in Southeast Asia. In 2012, Indonesia surpassed Brazil as the world’s biggest deforester, with the country losing 1.4 percent (2.3 million hectares) of its tree cover – an area nearly the size of the U.S. state of West Virginia – in one year. In 2013, Malaysia took over the infamous title, losing more than 2 percent of its tree cover that year. 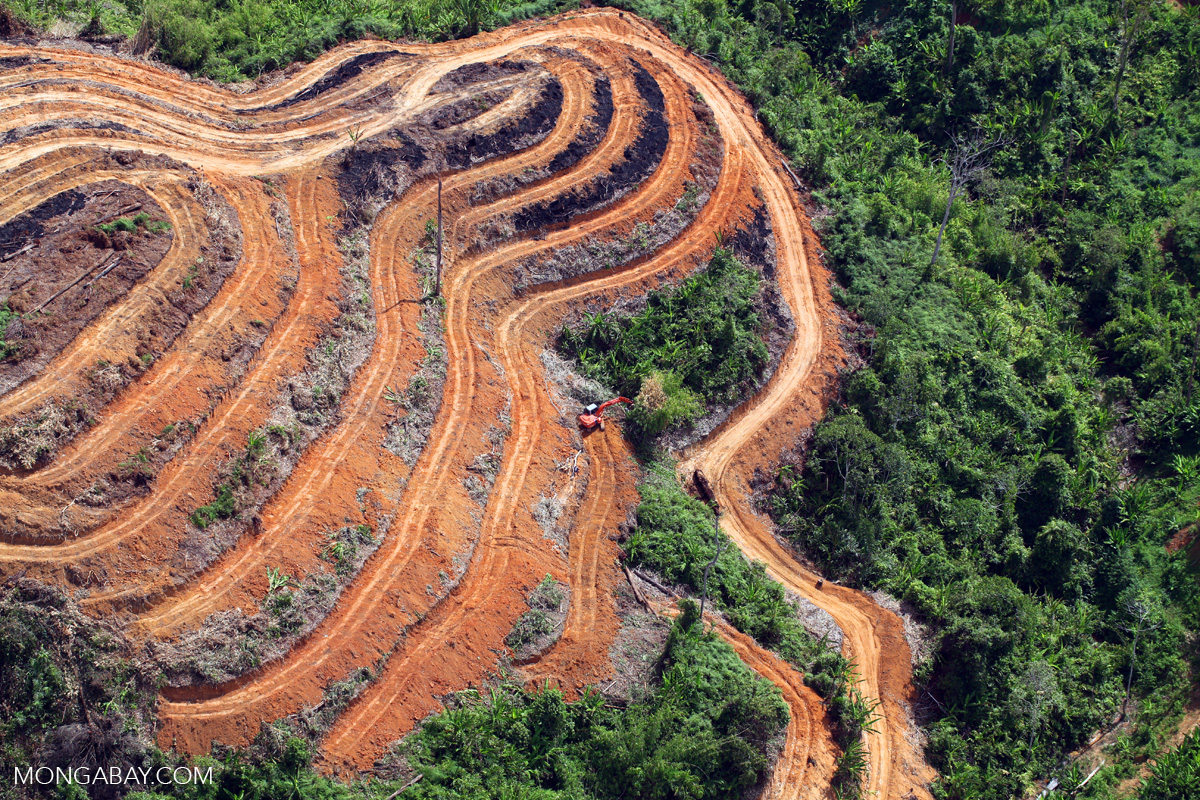 “Borneo is one of the oldest and most important forest ecosystems left on our planet,” said Gemma Tillack, Agribusiness Campaign Director at Rainforest Action Network. “It is a global tragedy that over the past four decades, its biodiverse rainforests have been razed to the ground to make way for millions of hectares of industrial plantations.”

But while scientists and conservationists agree that industrial agriculture has been heavily affecting Borneo’s forests, there hasn’t been a concerted look at the impacts of plantation agriculture on Borneo alone. To confront this, researchers from institutions and organizations in Indonesia, Malaysia, and other countries analyzed satellite data on tree cover change, comparing them to historical forest and concession maps to figure out just how much Borneo’s plantations – oil palm in particular – have displaced native forest.

However, their study indicates only around 4.5 to 4.8 million hectares of this now-plantation land were converted within five years of forest clearing. This five-year mark is crucial, they write, as plantations are likely to be developed quickly after deforestation and thus can be used as a way to figure out if forest was cleared to establish plantations or if the plantations were established on land that had already been cleared for another purpose.

“We were surprised that such a high proportion of the plantation planting in Indonesian Borneo was on land that had lost its forest long-before (more than a decade before),” said study coauthor Douglas Sheil of the Norwegian University of Life Science. “Indeed, we have been saying for some time that plantations should be put where they don’t cause harm — i.e., on land without high conservation values and where local people support the planting – so yes we were surprised at how much planting has avoided replacing forests (we don’t know about local people’s support from this study).

“It seems that indeed much of the area planted was cleared back in the 1970s before oil palm was a major land use in the region.”

But Malaysia is a different story. While the researchers found around 15 to 16 percent of forest was directly lost to plantation expansion on the Indonesia side of Borneo, on the Malaysian side that number was 57 to 60 percent.

“The pattern in Malaysian Borneo (Sarawak and Sabah) was less surprising as we see quite a rapid and systematic replacement of old-growth forest with plantations,” Sheil told Mongabay.

However, while the researchers found less deforestation for plantations than they were expecting in Indonesian Borneo since 1973, more recent data show a backslide. Since 2005, forest-to-plantation conversion has increased steeply, with half (4.8 million hectares) of that expansion happening in the 10 years between 2005 and 2015. Of this, 70 percent was in Indonesia, while Malaysia remained relatively constant from the 1970s to today.

“The rapid and accelerating rate of forest loss remains a major concern,” Sheil said. “Even if our data shows that oil palm has had a smaller impact than we thought and we are positive about that.   But our data also show that the recent trends are towards increasing replacement of forest.  So unfortunately there is a negative element and we shouldn’t overlook that.”

In Indonesian Borneo, this acceleration is happening despite a nationwide ban on deforestation for plantations. Enacted in 2011, the moratorium applies to all peatland and primary forest and was designed to provide time for Indonesia’s government to improve land-use planning and other undertakings aimed to help the county meet its carbon emissions reduction goals. It also provides incentives to establish oil palm plantations and other concessions on degraded land. In April 2016 the Indonesian government announced another moratorium, this time on new oil palm concessions.

According to Sheil, reasons why deforestation rates aren’t dropping in-step with the moratorium may include a lag between application and effect, as well as the difficulty of implementation.

“Presumably many of these were ongoing developments that were already in process, but it does indeed raise concerns about the implementation and value of such a moratorium,” Sheil told Mongabay. “Clearly there are huge challenges in overseeing any such process.”

One of many drivers of deforestation

Plantation expansion has become the dominant driver of deforestation in Borneo, according to the study. But the researchers acknowledge that they only looked at one thing: the delay between forest clearing and industrial plantation establishment. Because of this, their numbers are likely to be on the conservative side, with many other factors contributing to Borneo forest loss. For instance, there may be cases in which forest was cleared to make room for plantations, but those plantations weren’t established until more than five years later.

“For example some developers may buy up and clear land to show ownership even if they then take a long time to develop a plantation (e.g., due to financial problems or the need to find investment partners),” Sheil said.

The study also only looked at large-scale oil palm plantations, with small-holder operations making up around 11 percent of production in Indonesian Borneo. These smaller plantations, the authors write, may have also been established from native forest. Infrastructure like roads and processing plants, in addition to the human labor force required to tend plantations, may also have contributed to deforestation.

Sheil added deceit to this list: “I have come across the aftermath of apparently fraudulent plantation developments, that would also not be included in our analyses as no plantations resulted after the forests were cleared (when agreements provide a permit to clear forest and sell the timber, providing a profit to the business concerned, but nothing is planted and the business has absconded or claimed bankruptcy).”

A call for transparency

When it comes to plantations, land-use planning for forest preservation on Borneo is complex, with different regulations and ownership systems in Malaysia and Indonesia. But one thing the researchers say could help across the board is increasing transparency. They recommend their findings be used to bolster sustainability checks for the Roundtable on Sustainable Palm Oil (RSPO) – the world’s primary palm oil certification system.

The authors suggest that an online system be developed to show land cover history and ownership. They write that such a system could improve transparency and accountability to oversight organizations like the RSPO, as well as help nations keep better track of their zero net deforestation commitments and emissions reduction targets.

“In our view the lack of transparency about which companies are doing what and where is a big part of the problem (this information is treated as confidential), Sheil told Mongabay. “Transparency would permit more effective oversight, and companies that are doing the right thing can benefit as they would not share the bad reputation of those who actually deserve it.”

However, there do appear to be gains being made on this front. Nancy Harris, research manager at the World Resources Institute, points to efforts by Indonesia to improve transparency.

“I do think it’s worth noting that the current Indonesian government, through its One Map Initiative, is taking steps to address overlapping land claims and increase transparency as a partial solution to the complex situation of concession licensing,” Harris told Mongabay.

Sheil underlined the need to keep an eye on Borneo and its land-cover trends – particularly tracts of primary forest near areas of recent clearing activity. David Gaveau, lead author of the study and landscape ecologist at the Center for International Forestry Research, added that all lowland forests below 300 meters above sea level are at risk of conversion.

“A lot of forest remains in areas slated for conversion to agriculture by national and provincial landuse plans. Those forests are extremely vulnerable to conversion,” Gaveau told Mongabay. “We should keep a close eye on orangutan forest habitats and on peat swamps like for example the forests around Danau Sentarum National Park in Kapuas Hulu Kalimantan.”

Another particular area with recent forest loss is a region in the West Kutai Regency of East Kalimantan – where earlier this year Sumatran rhinos were discovered after being thought extinct in Indonesian Borneo. While the study looked at deforestation up to 2015, the forest monitoring platform Global Forest Watch indicates more tree cover loss has happened since then.

“Current rates of forest loss in Borneo justify major concern even if we need to rethink the role of plantations and the plantation industries,” Sheil said.