New research shows how soil carbon could be the key to protecting endangered species and reining in global emissions of greenhouse gases at the same time.

Worldwide, we’re spending less than a third of what it would take to protect global biodiversity and meet biodiversity targets adopted by the UN, according to a 2012 study.

Add to that the cost of meeting emissions reduction targets, which could be anywhere from several hundred billion to several trillion dollars, and it’s clear that any way we can do more with less is welcome indeed.

There is no doubt that carbon soil could help us meet emissions reductions targets. The total amount of carbon in soil is estimated to be far greater than in all vegetation around the world and the global atmosphere combined.

The authors of an article published last week in the journal Environmental Conservation argue that, in addition to helping the world reduce emissions, soil carbon can also help determine exactly where wildlife and natural habitat conservation funds would be most effectively deployed.

That’s because, despite what the authors describe as “shortcomings in available data,” natural habitats with greater soil carbon stocks were found to harbor large numbers of species, including many threatened species — far more than habitats with less soil carbon, on average.

The researchers looked at two well-studied tropical regions: the Virunga Landscape in Central Africa and the Federal District in Brazil. They found that 15 of 21 animal species of conservation concern in the Virunga, and nine of 10 in in the Federal District, rely on carbon-rich habitats, such as alluvial sites or wetlands. 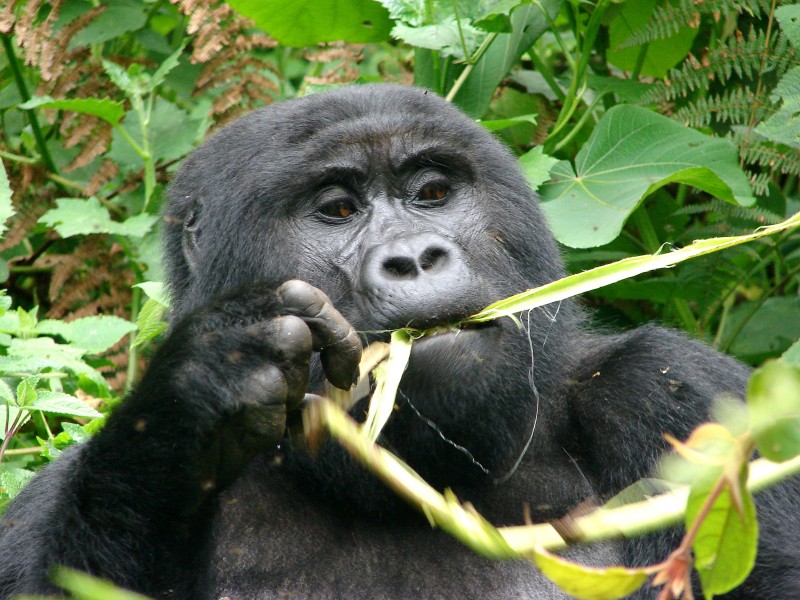 The team also examined what data was available on 1,048 threatened species in 37 different tropical nations and found that 85 percent rely on wetlands or carbon-rich alluvial habitats “to a significant degree” — a tendency observed in plants, mammals, reptiles, amphibians, and crustaceans, though not in birds.

“These carbon-rich habitats, and their biota, are also under greater threat from human activities, which further accentuates the conservation significance of these areas and their species.”

“Few conservation programs take soil carbon into account in a meaningful manner at present, though there is increasing attention to peat forests and mangrove that is in part due to their soil carbon,” Sheil told Mongabay.

On its surface, the concept is a fairly simple one. “By protecting natural habitats we are ensuring less carbon dioxide is released to the atmosphere, thus reducing climate change and ocean acidification,” Sheil said.

“By having more funds we can protect larger areas and might perhaps protect them better. This would be particularly valuable for the many species that make good use of lowland and wetland habitats. In the paper we point out that this appears to be the majority of endangered species.”

As an example, Sheil said that if you wanted to extend mountain gorilla habitat, it would make sense to include valley bottom areas, as these are the areas that the animals prefer. This land would likely have a higher market price, since it would also be good for agriculture and thus be targeted for conversion.

But that also means it has greater carbon value, so protecting the gorilla habitat also helps cut emissions from human activities. And thanks to the inclusion of the UN’s REDD+ program in the Paris climate agreement as a standalone article, there is likely to be a whole lot more money available for such efforts that protect carbon-rich natural habitats in the near future.

“The key benefit would be that such a project could attract more carbon payments, which would ultimately allow more habitat to be protected,” Sheil said. “It would perhaps be a part of a larger scale landscape approach that includes the preservation of natural areas, along with land-uses that have minimal carbon costs.”

But of course, there are a lot of devils in the details. For one thing, it’s unknown how much funding will ultimately be available to support these types of initiatives.

Then there’s the lack of data. “Available information is inadequate to confidently assess all the key relationships,” Sheil and team wrote.

“Another uncertainty is the depth of soil to consider,” Sheil said. “The deeper we go the more carbon we find, but current accounting tends to only consider the top 30 centimeters — though we know that draining peat can impact soil carbon at much greater depths.”

Sheil and team also caution that it’s important carbon finance be used in addition to conventional conservation funding, as opposed to becoming a substitute for those funds.

“Threatened species outside carbon-rich sites (e.g. many birds) also require conservation and resources will still be needed to address hunting, over-harvesting, invasive species and other biodiversity threats,” they wrote.