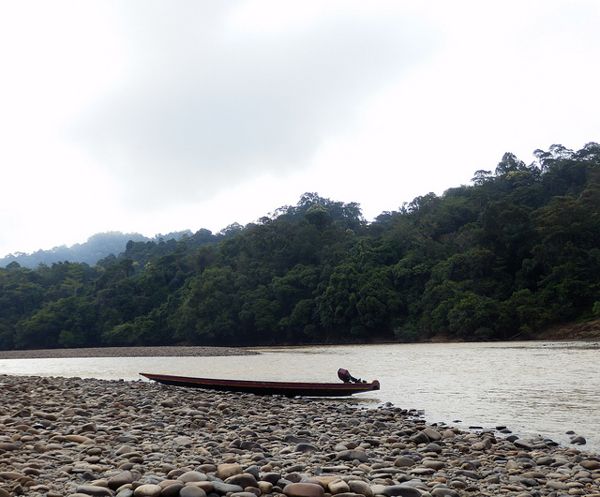 A boat rests on the shore of the Baram River in Sarawak, Malaysia. The area will be inundated if the controversial 1,200-megawatt Baram Dam is built. Photo credit: International Rivers.

The Malaysian government plans to build 12 hydropower dams and two coal-fired power plants by 2030 in the state of Sarawak, which lies along Borneo’s northern coast. Sarawak is the poorest and most rural state in Malaysia, according to the report, and the government is hoping cheap electricity will attract manufacturing and industry.

Local activists have argued for years that the dams would produce significant amounts of greenhouse gas emissions and severely impact river ecosystems and biodiversity while destroying their culture and livelihoods.

Now Daniel Kammen and co-author Rebekah Shirley of the University of California, Berkeley, have run the numbers and, in their report titled Energy Planning and Development in Malaysian Borneo: Assessing the Benefits of Distributed Technologies versus Large Scale Energy Mega-projects, found that a more localized approach using an array of clean-energy technologies would work better than centralized energy production at major infrastructure projects.

“We found that a community-by-community strategy based around mini-grids with micro-hydro at the core, and augmented with solar or biomass as the case may be, is a very good match to the demands of households in Sarawak,” Kammen told mongabay.com in an email.

Most importantly, Kammen added, small, localized energy grids – or mini-grids –could provide enough energy for commercial enterprises and other income-generating activities, which pretty much negates the need for the mega-dams in the first place.

“In perhaps the most key finding,” Kammen said, “we have found that this clean energy mixture can even meet the aggressive 7-8% growth/year scenarios that have been used to argue for the need for mega dams.”

There are also plans to build large hydropower dams in Sabah, the other Malaysian state on Borneo. Those plans have been criticized as well, for their impacts on forest and river ecosystems as well as the communities who rely on them. In 2010, Kammen examined plans for a proposed coal-fired power plant for the district of Lahad Datu, Sabah, and found that it had many costs and risks that had not been taken into account. The project was later scrapped. 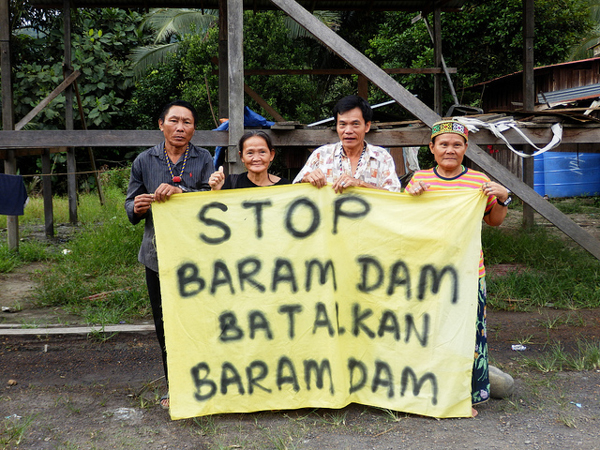 Members of the Penan indigenous group carry a sign stating their opposition to the proposed Baram Dam in Sarawak, Malaysia, in February 2014. Many indigenous communities oppose the dam, which will displace between 6,000 and 20,000 people, according to various estimates. Photo credit: International Rivers.

For the present study, Kammen and Shirley looked specifically at the proposed Sarawak Corridor of Renewable Energy, which Kammen said is more focused on hydroelectric dams than any of the Malaysian government’s other energy development plans.

Sarawak has enough mega-dams already completed or under construction to meet current energy needs as well as aggressive growth targets, Kammen said. And while there is almost no state-level capacity to plan, design, and implement mini-grids, some have already been built in Sarawak by non-governmental organizations (NGOs).

The benefits of transitioning to clean energy and mini-grids and away from large-scale hydropower are many, according to Kammen, and they’re not limited to saving acres upon acres of forest and wildlife habitat from being submerged under water.

While the amount of greenhouse gas emissions varies by energy mix, they are similar to or less than the official government estimates of emissions from electrifying villages via big dams, he said, adding, “Sarawak could become a leader in bringing energy access to remote communities, preserve the forest, and save tremendously on resettlement and other costs associated with mega-dams.”

Kammen met with Sarawak’s Chief Minister Adenan Satem last month to present his findings. While he stopped short of claiming Adenan seemed poised to rethink Malaysia’s energy development strategy, as the Borneo Post did, Kammen said, “I was tremendously impressed with how thoughtful [Adenan] is, and the degree to which he was interested to address the energy needs of Sarawakean residents at all social levels.”

Malaysia is not the only country facing criticism over its reliance on mega-dams for economic development. Because of plans to build large hydroelectric dams in tropical river deltas across the globe, from the Mekong to the Congo to the Amazon, Kammen and Shirley write in the report that “Tension is growing between civil communities and policy makers as decisions affecting land rights, resource use, industry, and social and ecological health are being made with little discussion of necessity, risk and alternatives.”

The authors argue that, despite “inherent inertia against departing from the established, centralized patterns of control,” there is a need for developing countries to balance the creation of large infrastructure projects like mega-dams with smaller, distributed solutions like solar and wind that are more “locally appropriate.” 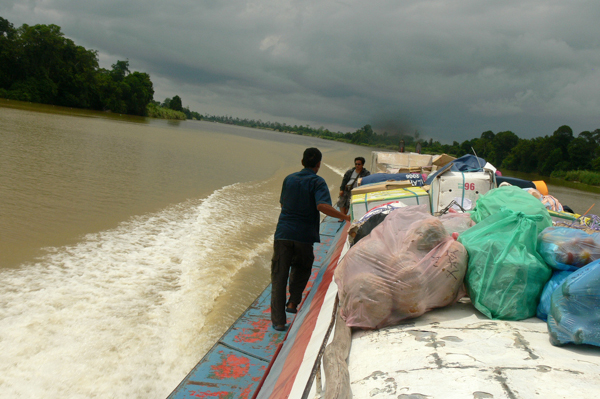 A boat carries cargo up the Baram River, in Sarawak, Malaysia, in August 2011. Photo credit: MyBukit.

“While there is widespread agreement on the need for a combined approach, most national energy or electrification strategies contain very few details on the integration of decentralized systems and little information on the potential for distributed solutions is available for public discourse,” Kammen and Shirley write.

“We see this story playing out across Asia, Latin America and Africa where the mega-dam has become a resurgent solution for energy service.”