by Mrinalini Erkenswick Watsa on 30 June 2015 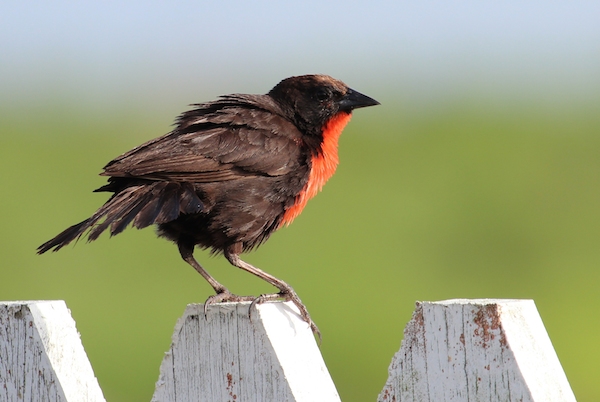 This red-breasted blackbird (Sturnella militaris) is one of the relatively few bird species that is found in oil palm plantations. Photo by Alexander Lees.

It may not surprise you to hear that monocultures of oil palm (tree species of the Elaeis genus) do not support a great diversity of species in comparison to primary forests. But just how bad is it? A recent study systematically documented bird biodiversity within oil palm plantations, finding they contain fewer species than secondary forest and even cattle pasture. As oil palm grows as a commodity in Brazil – and can legally even be used to “reforest” land – how can a country that has made big gains in reducing deforestation in recent years balance this powerhouse industry with environmental welfare?

Following on the heels of a gargantuan beef industry, palm oil is slated to be Brazil’s next hot commodity, particularly in the state of Pará. Although more than 80 percent of palm oil production is still contained in the Indo-Malaysian region, Brazil has 850,000 square miles of land identified as ideal for oil palm cultivation. That is seventeen times more land area than is being currently used to grow oil palm in Indonesia and Malaysia.

“Proponents of palm oil emphasize that its main alternatives, including soy, sunflower, and canola oils, have production efficiencies just 10–20% as high as palm oil (on a per-hectare basis) and would therefore require much larger areas of cultivated land to have a similar benefit,” reports Alexander Lees, the author of the study on avian biodiversity, which was published in the Journal PloS One in May.

Brazil’s northeastern state of Pará is the primary region to host this expansion of oil palm acreage, which doubled between 2004 and 2010. According to the Global Forest Watch monitoring platform, Pará lost more than 8,560,000 hectares of tree cover – nearly 8 percent of the state’s total amount of dense tree cover – to deforestation and plantation harvesting between 2001 and 2013. Of that, around 936,000 hectares were lost from the state’s intact forest landscapes (IFLs), which are areas of primary forest that have been relatively undisturbed by human impact and which still contain their original levels of biodiversity. 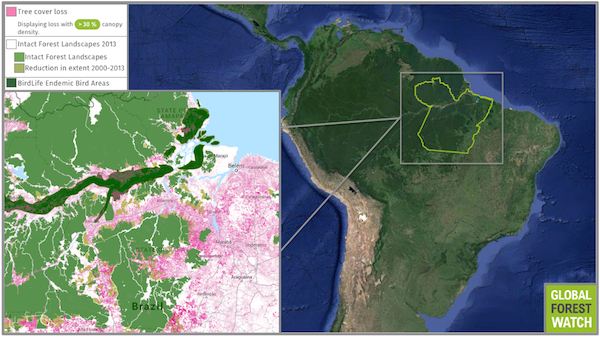 The state of Pará occupies Brazil’s northeastern corner and, as with much of the rest of the country, has experienced an uptick in deforestation in recent months. This is thought to be due to a weakened currency and reductions in conservation funding. The Amazon River transects Pará, along which vital wildlife habitat and agricultural plots mingle. The region is listed by Birdlife International as an Endemic Bird Area, meaning that it contains endemic bird species that are found nowhere else in the world. Click to enlarge.

By conducting systematic transects in cattle pasture, cropland, oil palm plantations of all ages, and secondary forests, Less and colleagues conclusively showed that oil palm plantations had significantly lower overall avian diversity than any other area surveyed. Young oil palm stands were occupied by birds typical of cattle pastures, such as the pale-breasted spinetail (Synallaxis albescens) and the red-breasted blackbird (Sturnella militaris). Tree species richness was the most important factor that predicted avian species richness across all areas. Endangered species such as the channel-billed toucan (Ramphastos vitellinus), the red-necked aracari (Pteroglossus bitorquatus), and the white-bellied parrot (Pionites leucogaster) were largely recorded in primary forests alone.

In regions within the Brazilian Amazon, the government has mandated the protection of areas of secondary forest as permanent protection areas (áreas de preservação permanente or APPs) and legal reserves (reservas legais or RLs). Land within both APPs and RLs, however, may be privately owned. Consequently, it is the responsibility of landowners to maintain vegetative cover on at least 80 percent of their land.

However, many landowners aren’t required to use native species for vegetative cover.

“Many people have less than what is required so they are legally obliged to reforest (or enter into off-farm compensation where such schemes are available) – thus there has been pressure from some sources that [oil] palm be used to make up the deficit,” Lees told mongabay.com in an interview.

Despite opposition by Lees and other scientists, including a short communication published in the journal Nature in 2013, the Environmental Council of Pará State (COEMA) recently passed a resolution that designates oil palm cultivation as a “low-impact” land-use that may serve as a substitute for native forest vegetation within APPs and RLs. While this option is currently applicable only to landowners with holdings smaller than 20 hectares (0.08 square miles), that restriction is not set in stone.

“With this precedent there is now a powerful rural lobby arguing for this dispensation to be available to all landowners, irrespective of property size,” write Lees and his colleagues in their paper. 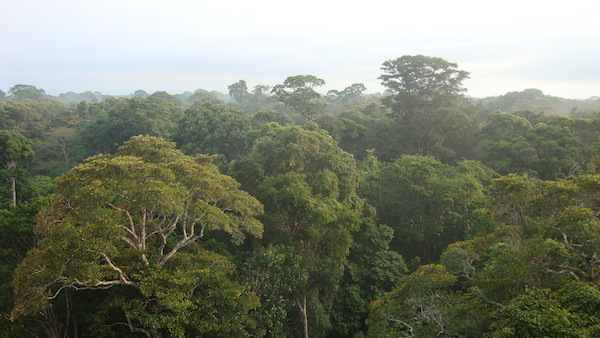 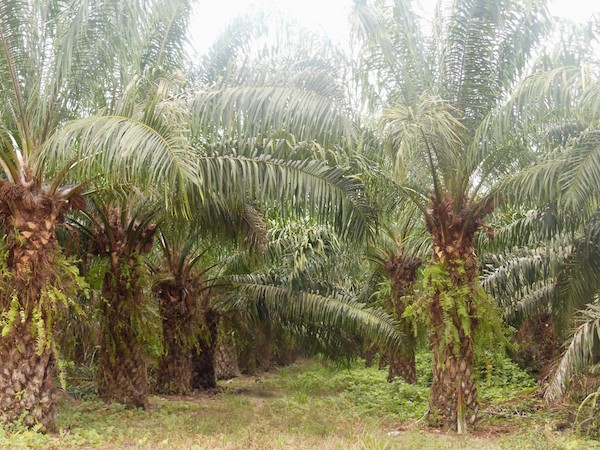 An established oil palms. While some species are able to inhabit monoculture tree plantations, many more are not. Photo by Alexander Lees.

In 2012, Brazil carried out a controversial revision to the nation’s Forest Code originally proposed in 1965, one of the stipulations of which was a Declaration of Environmental Licensing Waiver (or Declaração de Dispensa de Licenciamento Ambiental [DLA]). According to Ima C. G. Vieira of the Museo Paraense Emilio Goeldi of Brazil (a co-author with Lees), the DLA defines activities with minimal environmental degradation and grants them the ability to be carried out without official and more complicated government permits. Oil palm is not currently on that list, but Vieira fears that it will not remain so for long.

“So [producers of oil palm] are lobbying COEMA so that palm could be considered low impact and become included in Annex 1 of the [DLA] rules,” Vieira told mongabay.com in an interview.

In December 2013, bill PLC119/2013, which seeks to sanction the use of oil palm in degraded areas, was introduced to the Committee on Constitution, Justice and Citizenship (CCJ) of the Legislature. Two other committees, including the Agriculture and Agrarian Reform Commission, approved it in April 2015. Amendments were invited, and Senator Angela Portela submitted one expressing concerns over introducing what is effectively a non-native and potentially invasive species to the country. The bill is currently under deliberation by the three committees.

“Studies overseas show that oil palm impacts on riparian systems are significant given the requirement of large quantities of agrochemicals. Brazil would be no different and we can clearly see that most bird species do not use plantations, so the corridor effect of the APPs would be negated, ” Lees told mongabay.com. 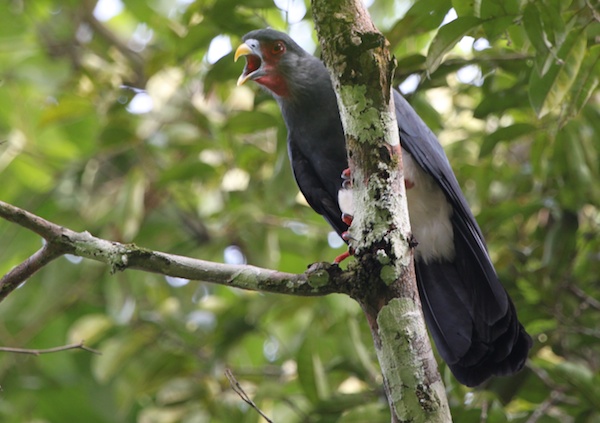 Lees and his colleagues are not against oil palm expansion if it doesn’t result in indirect land-use change, such as additional loss of forest, including secondary forests in APPs and RLs. Instead, Lees suggests it be cultivated in large areas of abandoned or poorly performing pastures, which could be converted to oil palm plantations with minimal impact. He said palm oil plantations could even be beneficial in controlling erosion in these areas.

“However we don’t want to see secondary forests being targeted,” Lee said. “Given the negative environmental externalities associated with monocultures this ought to be a no-brainer. We think there is ample room for expansion in the region without targeting environmentally sensitive areas.”