This article is the second in a two-part series on mangrove conservation. Read the first part here. In December 2014, 350,000 litres of oil spilled into the Sunderbans delta – the world’s largest contiguous tidal mangrove forest and a World Heritage Site – of which one-third lies in India and two-thirds in Bangladesh. The spill, from the collision between an oil tanker and a cargo vessel, occurred in a protected sanctuary for the endangered Irrawaddy dolphin (Orcaella brevirostris) and the Ganges river dolphin (Platanista gangetica). The Sunderban mangroves, like many others, are home to an plethora of endemic and protected species including Bengal tigers (Panthera tigris), black-capped kingfishers (Halcyon pileata), endangered fishing cats (Prionailurus viverrinus), salt-water crocodiles (Crocodylus porosus), water monitors (Varanus salvator), and green sea turtles (Chelonia mydas).

In a press conference last month, the Sri Lankan government, in tandem with U.S.-based Seacology and locally operated Sudeesa, announced full protection for the country’s existing 8,815 hectares of mangrove forests, making Sri Lanka the first nation in the world to extend complete protection to its mangroves. Over the next five years, the project will provide alternative job training and microloans to 15,000 Sri Lankan women living in 1,500 small communities adjacent to the mangroves. In exchange for the microloans, communities will be responsible for protecting the mangroves. Estimated to cost $3.4 million, the project will also replant 3,800 hectares of mangrove forests that have been cut down.

A UNEP report released in December 2014 during the climate conference in Lima, Peru, found that mangrove forests are being cleared three to five times faster than terrestrial forests, costing the world as much as $42 billion in economic damages every year. For example, it says the mangroves that were either cleared or degraded between 2000 and 2010 in Central Africa, released more than 100 million metric tons of carbon dioxide and cost billions in infrastructure maintenance and repairs.

“The escalating destruction and degradation of mangroves – driven by land conversion for aquaculture and agriculture, coastal development and pollution – is occurring at an alarming rate, with over a quarter of the earth’s original mangrove cover now lost,” said Achim Steiner, the executive director of UNEP.

Even though about 90 percent of the world’s mangroves are found in developing countries, they are not currently considered part of the REDD+ strategies at UN talks, according to the UNEP report. REDD+ (reducing emissions from deforestation and forest degradation) incentivizes reduced deforestation and greenhouse gases emissions. Steiner says not including mangroves in the REDD+ conservation strategy is a huge missed opportunity in addressing climate change and compensating developing countries that are likely to suffer some of the direst impacts of a climate crisis.

A Proceedings of the National Academy of Sciences paper argues that mangroves are under-appreciated assets in efforts to slow climate change. Researchers from Resources for the Future and the University of California at Davis estimated the cost of reducing greenhouse gas emissions by preserving mangrove forests, which globally store 6.5 billion tons of carbon in their biomass and soils. They found that most emissions from mangrove destruction and degradation could be avoided at less than $10 per ton of carbon dioxide.

“Mangroves may already fit within the general REDD architecture,” the authors write. “Our results suggest the need for practical evaluations of mangrove-based carbon offsets, including rigorous local assessments of offsets as well as developing their robust verification and monitoring.”

In 2010, the Jakarta Post reported that, according to a local NGO called People’s Coalition for Justice in Fisheries, Indonesia lost 2.2 million hectares of mangroves in less than 30 years. The report attributes the loss to construction of brackish fishponds and the expansion of oil palm plantations. Conservationists hope Sri Lanka’s move to protect all its mangroves could help push other South and Southeast Asian mangrove range countries in the same direction. 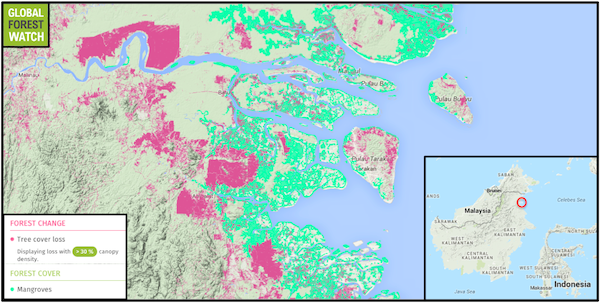 Many of Kalimantan’s mangroves have been displaced by development, such as these in the state of North Kalimantan. Tree cover loss (pink) within mangrove areas (green) indicate areas that have likely experienced deforestation since 2001. Click to enlarge.

In Myanmar, a study published in the journal Global Environmental Change found that mangrove cover in the ecologically important Ayeyarwady Delta was being lost at an annual rate of 3 percent mostly due to agricultural expansion. Under a business-as-usual scenario, the report projects that unprotected Ayeyarwady Delta mangrove forests could be completely deforested by 2026.

Conservationists behind the new project launched in Sri Lanka believe that the focus on women will bring huge benefits to living standards in coastal communities. They are convinced it is the most effective way to get the coastal communities to care for their mangroves instead of hacking them down for firewood.

“We have discovered that if you want a project to succeed, have the women of the community run it. Other conservation organizations have found the same thing,” Anuradha Wickramasinghe, Chairman of the NGO Sudeesa, told the Guardian. “It’s in our culture. The mother is the central (sic.). Even in my own family, my mother and my wife, it’s the same.”

Wickramasinghe believes that local women will protect the mangrove forests of Sri Lanka by ensuring that no one in their communities, or from outside, cuts down the trees. If persuasion does not work, the new scheme makes it possible for them to alert authorities for enforcement support.