With more than 3,000 hectares cleared so far and more to come, Greenpeace and other organizations call for detailed land-use strategy in Cameroon

In its push to become a middle-income country in the next two decades, Cameroon has courted investments in its vast natural resource wealth in the form of mining, logging and large-scale agriculture. But deforestation and land prospecting revealed by a recent Greenpeace Africa investigation highlights a lack of coordination in determining how to use the country’s land.

In 2011, Economy Minister Emmanuel Djoumessi Nganou was quoted by Reuters: “The private sector in general, and the agricultural sector in particular, must play a leading role in our country’s quest to become an emerging economy by 2035.” The government had just approved plans for an oil palm and rubber plantation of more than 45,000 hectares by the company Sud Hevea Cameroun. Current estimates put the number of jobs the company has created or will create at more than 6,000.

But Greenpeace and several other organizations say that instead of having an overarching strategy that governs how land should be used for extractives, communities, and conservation, concessions and permits are distributed by individual ministries that are stymied by corruption and don’t often communicate with each other.

A 2012 report by WWF and several other NGOs looking at the conflicts arising over land use in Cameroon noted “competition between sectoral ministries rather than a coordinated approach to deliver economic, land and natural resources efficiency.” The ramifications of this at-times haphazard process are widespread, affecting the communities that depend on the land for their livelihoods, the biodiversity and carbon resources in the forest, and the companies themselves that bring their investment dollars to Cameroon.

Conservation groups point to the opaque process employed by the U.S.-based Herakles to secure approval for a 20,000-hectare oil palm development in 2013, which has been criticized for its placement near Korup National Park and the potential negative fallout for nearby communities that depend on the forest.

Greenpeace Africa’s most recent findings center on Chinese-owned rubber plantation company Sud Hevea Cameroun, with a report by the NGO showing the company has made inroads developing its concession in the eastern part of the country. Satellite images obtained by Philippe Verbelen from his colleagues at Greenpeace Russia show deforestation of more than 3,100 hectares between 2011 and 2014 on the periphery of the Dja Faunal Reserve, recognized as a UNESCO World Heritage Site for its array of biodiversity and unique blend of habitats. Verbelen is a forest campaigner with Greenpeace Belgium who led the investigation. 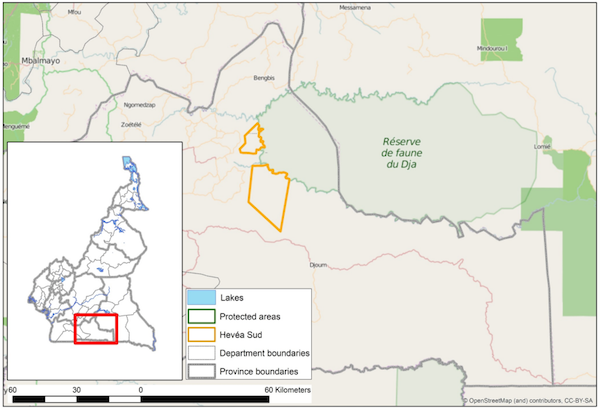 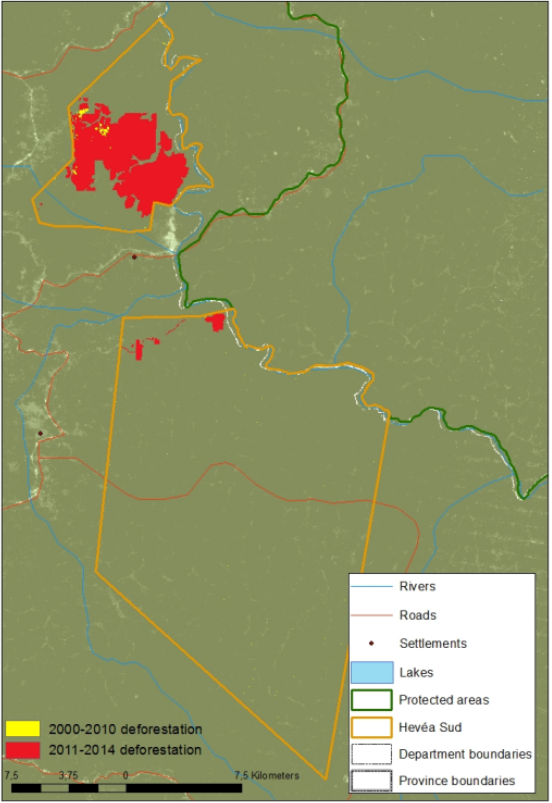 The northern unit has experienced the most deforestation so far, with Greenpeace estimates indicating 3,105 hectares were felled between 2001 and 2014, amounting to about 38 percent of the unit’s total forest cover. Image courtesy of Greenpeace. 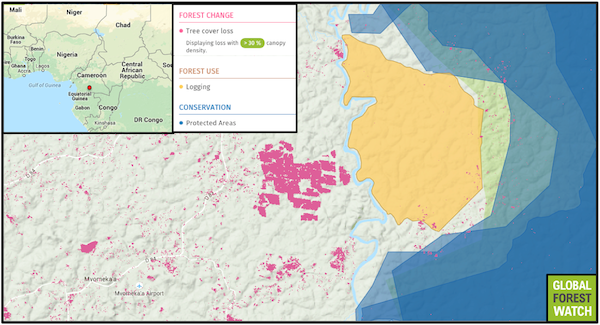 Data from Global Forest Watch corroborates Greenpeace’s deforestation findings, showing about 1,500 hectares of tree cover were lost from the north unit from 2011 through 2013, the last year for which data is available. The Hevea Sud Cameroun concessions aren’t the only places affected by human activity in the area; the forest surrounding the developing plantation is also dotted with tree cover loss, and a logging concession occupies the area between the unit and Dja Reserve (blue). Click to enlarge.

The Dja is home to chimps, gorillas, elephants, buffalo, and leopards, according to a 2015 report by the Center for International Forestry Research, a scientific organization known as CIFOR. It’s this wildlife wealth that makes the proximity of the Sud Hevea Cameroun plantation to the park’s buffer zone so troubling, said Verbelen.

“Once such an industrial-scale plantation establishes itself, the intensity of poaching will definitely increase,” he said. “All of a sudden there’s going to be hundreds – later on probably thousands – of people running around.”

CIFOR’s investigation of the Sud Hevea Cameroun plantation uncovered worries on the part of UNESCO inspectors, who called the development “a new, serious and specific hazard” to the Dja Faunal Reserve. The UNESCO inspection team reported that they tried to visit the site, but they were refused access for security reasons.

The CIFOR report also revealed that a top Cameroonian politician owns 20 percent of Sud Hevea Cameroun. Though the CIFOR researchers couldn’t confirm the person’s identity, they wrote, “It is likely the Cameroonian shareholder influenced the allocation of the temporary concession near a World Heritage site without regard to existing land designations and relevant regulations.”

Sud Hevea Cameroun representatives did not respond to mongabay.com’s requests for comment.

Instead of corruption and top-down process that favor political elites, groups such as CIFOR, WWF, and Greenpeace advocate the development of a broad-reaching strategy for Cameroon’s land. “What is really urgently needed is that they develop not just an industrial vision for the country but also a land use plan that outlines which areas they’re going to secure for biodiversity and for community needs in the future,” Verbelen said. Based on his research, Verbelen believes that a Cameroonian company that make soap, detergent and cooking oils is looking for 40,000 to 50,000 hectares of land to grow oil palm.

“These are big multinational groups arriving, and if they don’t have legal certainty for their investments, that’s going to be bad for business too,” Verbelen said. Often, that’s because the different ministries in charge of providing permits don’t talk to one another.

“Land-use conflicts could prove to be extremely costly for the Cameroonian Government and Cameroonians in financial terms, and could totally undermine the expected financial benefits of the resource extraction strategy of the Government,” wrote the authors of the WWF report, which include representatives of two Cameroon-based NGOS, the Center for the Environment and Development (CED) and RELUFA, which works to stop hunger.

They added, “Land-use planning is one of the most important policy level issues facing the Cameroonian Government as it strives towards the goal of economic prominence by 2035.”