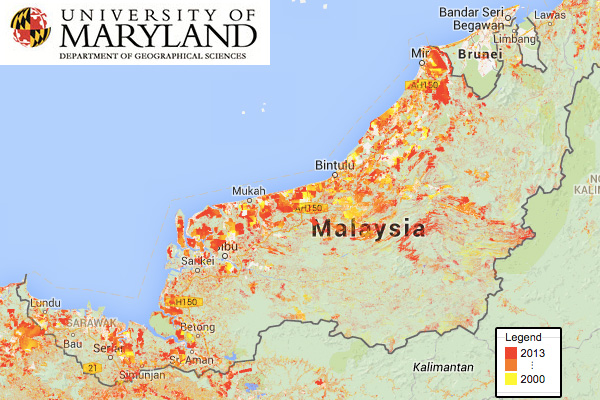 University of Maryland map showing forest loss since 2000 in Sarawak.

After decades of intense logging that has left its rainforests degraded, fragmented, and stripped of valuable timber in many areas, the Malaysian state of Sarawak has passed a new forestry bill that could boost penalties for illegal logging.

The measure, passed last week, imposes fines of up to one million Malaysian Ringgit ($280,000) and 5 years in prison for the most serious forestry offenses, including companies that make false declarations about their activities and the origins of their timber.

The move comes after Chief Minister Tan Sri Adenan Satem — who came into office just over a year ago — promised to crack down on illegal logging and clean up Sarawak’s notoriously corrupt forestry sector. 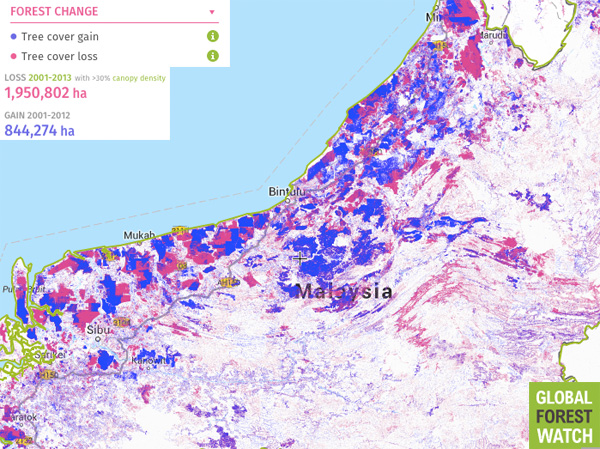 Forest loss and gain in Sarawak between 2000 and 2013, according to Global Forest Watch.

However the new regulations still needs to be effectively implemented, a concern given past abuses in the state. Furthermore, legal logging in Sarawak hasn’t necessarily been well-managed either — forests in some areas have been harvested at rapacious rates, leading to depletion of timber stocks and eventual conversion to industrial timber and oil palm plantations.

According to a study published in 2014, 86 percent of Sarawak’s lowland forests were cleared or degraded by logging since 1973. Data presented on Global Forest Watch shows that net forest loss in Sarawak topped a million hectares between 2000 and 2013.