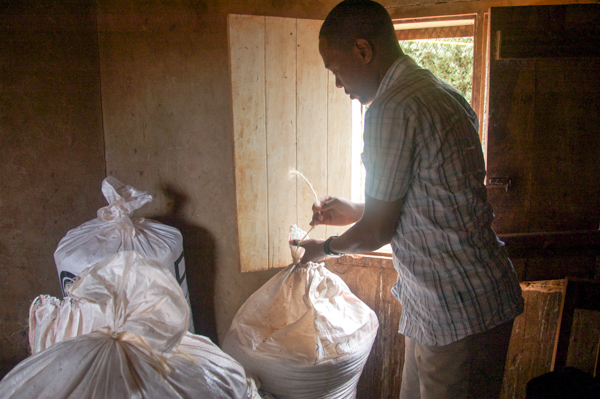 A researcher with the Swiss development organization Helvetas opens a polypropylene bag inside a farmer’s storage room as part of a project testing the efficacy of various corn storage methods. Credit: Rachel Cernansky.

Corn is an integral part of many meals in Tanzania and its neighboring East African countries. Ground, it makes a thin, viscous porridge for breakfast. Mashed with beans and potatoes, it’s lunch. Roasted on the cob, it’s an afternoon snack. And cooked with water, corn flour makes a bread-like side dish that is the main source of calories at dinner.

So when the harvest season comes to rural areas, where most inhabitants are subsistence farmers, bellies are full and happy with a favorite local food. A few months later in many homes, however, this staple is all but gone. Families then face hunger—or tough choices between paying for food or other necessities.

The problem for many farmers is not that they don’t grow enough corn, it’s that they store the corn poorly and lose much of it to insects, rats, or mold, which is a chronic health hazard in many parts of Africa. In recent years, researchers have been developing ways to help farmers keep their harvest fresh longer in storage, and have come up with several promising solutions.

After the harvest, farmers typically dry their corn in the sun, then store the kernels in woven polypropylene bags that sit for months on the dirt floors of their storage rooms. The rest of the season becomes a waiting game—a matter of when, not if, they will open the bags to see black taking over the yellow of the corn, as insects multiply and eat their way through the kernels. Usually the farmers eat the corn anyway, often laying it out in the sun to chase away as many insects as possible.

Similar problems befall beans, sorghum, and other staples during the post-harvest stage, which includes the time a harvested crop spends on the farm, during storage and processing, in transport, and at market. Approximately 14 to 18 percent of all cereal crops in sub-Saharan Africa are lost each year during the post-harvest stage, according to the African Postharvest Losses Information System, a database and network of cereal experts across sub-Saharan Africa financed by the European Commission.

Three promising new tools to improve crop storage rely on the fact that insects need oxygen to live. Larry Murdock, an entomology professor at Purdue University in Indiana came up with a bag that looks and functions a lot like the polypropylene bags that farmers already use, but it consists of three separate plastic layers that make it both tougher and able to keep out oxygen when each layer is tied closed with a cord. The bags, called Purdue Improved Crop Storage bags — PICS bags for short — also offer a slightly better defense against rats than the regular polypropylene bags.

Researchers are also testing metal silos, simple cylindrical containers that come in a range of sizes holding between 250 and 1,800 kilograms (approximately 550 pounds to two tons). The silos, which can be manufactured locally, have a resealable opening on the top for filling and a small spout at the bottom for dispensing the corn.

There is also a line of "Cocoons" sold by the Massachusetts-based company GrainPro. These are essentially giant, airtight containers or tents that seal in numerous bags of corn. Because of the cocoons’ expense and size — they can store up to 300 metric tons (330 tons) of grain — they are meant for use by farmer’s groups or whole villages rather than by individual smallholders.

Several organizations and government agencies have been distributing or testing the PICS bags, the silos, and the cocoons, along with a few other variations on the same principle, in countries throughout Africa and elsewhere. The PICS bags are farthest along. They are already used in 23 countries in Africa and Asia, and are being tested in four others for storage not only of corn but of other cereals and legumes as well, said Dieudonné Baributsa, an entomologist at Purdue University who works with Murdock.

The PICS bags, silos, and cocoons are all showing strong results for corn, allowing it to last longer without pests invading. And farmers like them. The PICS bags don’t much change their current storage practices, once they have the bags in their hands. The silos are a newer concept and are more expensive than the PICS bags. But they last longer, are easier to handle, and keep rats at bay more effectively, so, at least during recent farm visits, farmers seemed to prefer them.

Faraji Msechu, a farmer outside of Babati, Tanzania, who has provided space on his farm to test a metal silo and PICS bags against his normal polypropylene bags, said other farmers have dropped by to check out the silos. “They were very interested, but they don’t have money to buy,” said Msechu. “Once I have some money, I will buy myself. Maybe one per year, year after year.”

According to a local artisan who has learned to make the silos at his shop, farmers seem most interested in the 500- and 1,000-kilogram sizes because they are the most practical. They are designed to be within financial reach, even if the investment — about $80 for the 500-kilogram silo — is a steep one.

The next step is to make these tools widely available and more affordable said Chacha Nyangi, a Tanzanian food scientist with the International Institute of Tropical Agriculture, a research organization headquartered in Nigeria with projects across Africa. Nyangi has studied PICS bags, metal silos, and other developments in grain storage in rural areas and is pleased with their performance. He is now working to set up a distribution network so that farmers will be able to buy PICS bags at local markets. Prices are expected to fall as demand climbs. There are separate efforts to train local artisans to make the metal silos, in order to minimize costs as well as create new jobs.

It’s still early days, but Nyangi is optimistic. The 2013-2014 corn season was the first in many years that some farmers in southern Tanzania experienced zero crop losses. Nyangi recalls them celebrating, all thanks to the PICS bags. “That’s why farmers are now asking for these things,” he said.