Empowering women in order to save the harvest 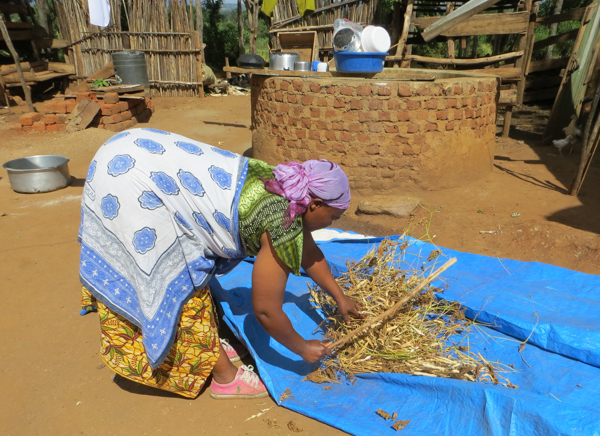 A farmer threshes beans just harvested from a field outside Babati, Tanzania. Women make up nearly half of the agricultural workforce in sub-Saharan Africa. Credit: Rachel Cernansky.

On a hot weekend in February, Shamim Daudi sits down with farmer after farmer near Babati, Tanzania, to talk with them about the way they store their corn. The organization she works for, the Swiss development group Helvetas, has been researching ways to help reduce the percentage of crops that farmers in Tanzania and across Africa lose to pests and mold. Up to 18 percent of all cereal crops and more than a third of fruits, vegetables, roots, and tubers in sub-Saharan Africa are wasted before they ever reach a consumer. There are technological challenges to reducing this vast waste stream: the tools must be simple, affordable, locally available, and reliable long-term without maintenance. But a challenge that might prove harder, and is perhaps more important to overcome, has to do with gender.

Women are responsible for nearly half of agricultural labor in sub-Saharan Africa, with some estimates reaching up to 90 percent. But they often don’t have the authority to make financial decisions for their families, even when it comes to managing or selling the crops they’ve grown themselves. A woman may realize that new-and-improved storage bags for corn have the potential to save her family’s entire harvest, but without approval from her husband, she won’t be able to go out and buy any.

This is what outreach workers like Daudi are up against. She travels from farm to farm in the villages near Babati, but can only get women to talk to her when the men are not home. She talks to Hawa Saidi Ibura, but only because her husband seems to be busy in another part of the house. When she gets to Faraji Msechu’s farm, then Julius Akanaay’s farm, their wives sit quietly during the conversation while the men do all the talking. Daudi, sitting outside the farmers’ houses on a stoop or a chair if there’s one around, asks every farmer the same questions, all focused on how much of their harvest they’ve lost to insects or mold, how much they’ve sold, how much they will need to feed their families until the next harvest.

During a water break between farm visits, she said it’s always the same. Even when she does manage to get a woman to talk, they don’t have all the answers because they’re left out of key parts of their family’s agriculture operation. “Women are involved in the preparation of the farm, production at the farm, harvesting,” she said. “But women are not involved in deciding when, where, how to sell. The man comes in.”

She continued: “If you ask a woman how much you sold, she’ll say ask her husband.”

Because women play such an integral role in agriculture as well as in maintaining a family’s well-being, and because some research has shown women are particularly receptive to learning new practices, Daudi and others believe they are essential to salvaging more of the region’s crops. For Daudi, that means changing gender dynamics within each home, so that women not only can educate themselves about the potential of those improved corn-storage bags, but also can go out and purchase some.

Sometimes engaging women is a matter of adapting equipment to accommodate them. Compatible Technology International, a Minnesota-based nonprofit that designs products to reduce crop losses in developing countries, learned early on that it had to consider women in the initial product-design stage. “We developed a pod stripper for groundnuts that ended up being too flat. Women couldn’t strip easily, so the engineering team created an A-frame structure so they wouldn’t have to bend over,” said Alexandra Spieldoch, the organization’s executive director. Women can now also carry their babies on their backs while using the stripper, she added.

The organization now considers women’s needs from the design stage all the way through implementation and training on a new product’s use. “By [integrating] gender sensitivity into the design and testing, we have more potential for success,” Spieldoch said.

Daudi has learned that if there is any hope of changing the way that farmers store their crops, it’s crucial to talk to both men and women. “Training both men and women is an attitude change,” she said. “It’s not only about money, it’s about traditions. If you only train men and he doesn’t change, there’s no one to ask. We’re trying to show the beauty of deciding together.”

Women also bear the brunt of the current inadequate storage methods. When it comes to fresh fruits and vegetables, for instance, Tanzanian farmers have more than they can eat or even sell for a few months during and after the rainy season. But without refrigeration or other ways to extend the life of this produce, it disappears from farms and markets as soon as the dry season rolls around.

“Traditionally, women are the ones who work with food,” said Odette Ngulu, who works for the Tanzanian Ministry of Agriculture, Food Security and Cooperatives. “The need to feed the family is still there, whether it is dry or not. They go wandering, looking for vegetables. They spend hours looking. And then they have to go to fetch water.”

That’s why Ngulu works mainly with women. For example, she trained one women’s group in Arusha to use solar dryers — elevated wood-framed boxes with opaque plastic covers and shelves inside. The group now uses the dryers to dehydrate bananas, sweet potato leaves, and other produce, which they package and sell at supermarkets.

But the prospect of success with these kinds of businesses can actually complicate the challenge of empowering women — which for people like Daudi and Ngulu goes hand in hand with reducing crop losses. A woman may decide to get into solar-drying to save food and make some money. But if she makes too much money, then the crop a man wouldn’t bother with before can all of a sudden entice him to get involved. That’s likely to undercut any authority she may have been building for herself, said Jemimah Njuki, senior program officer in Nairobi, Kenya, at the Canadian government’s International Development Research Centre. 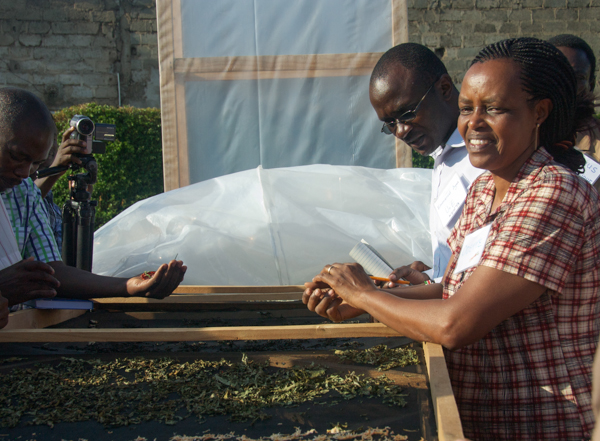 Odette Ngulu demonstrates a solar dryer dehydrating carrots and sweet-potato leaves for a group of agricultural workers from around Africa. Credit: Rachel Cernansky.

Take beans. Njuki said that because of the low price of beans, women are usually responsible for growing them. Her organization is working with women and local markets in Kenya and Uganda to develop new products, such as packaged cooked beans, that may help reduce the percentage of beans lost to pests. “If that market changes, we don’t want women to lose control of that crop,” she said. So she and her colleagues are exploring ways to ensure that women retain control of any market they can establish for new bean products.

Njuki calls this taking a “gender-transformative approach.” That includes getting researchers to take gender into account whether they’re focused on economics or technological innovations to reduce food losses. Ultimately, she said, “the idea is to give women the power of negotiation.”

Eventually, Daudi thinks, changes like these can have a ripple effect beyond the home, the farm, and the marketplace. “We are also pushing for women to be in decision-making positions.” Daudi said. “You can’t get good women at the national level if you don’t start at this level.”