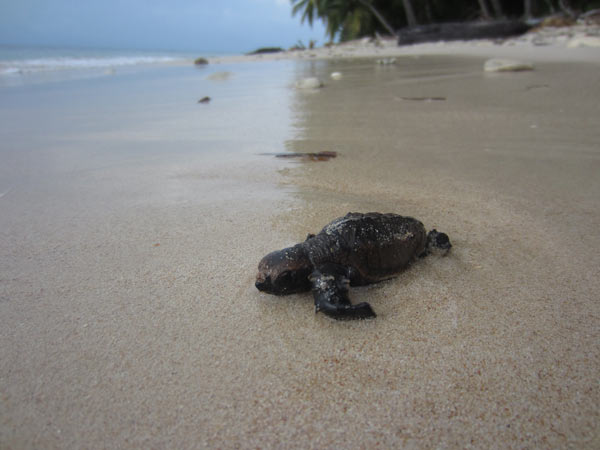 A hawksbill sea turtle hatchling heads towards the sea. This year over 35,000 hatchlings were born in the Pearl Cays: Photo credit: WCS.

Hawksbill sea turtles (Eretmochelys imbricate), a reptile listed as the highest threat level by the IUCN Red List of Endangered Species, are making a momentous local comeback in Nicaragua’s Pearl Cays. This Critically Endangered turtle, although reduced to 85 percent of their historical numbers, has shown a nesting increase of over 200 percent from just 154 nests to 468 nests in the last 14 years. Due largely to the work of the Wildlife Conservation Society, which established the Hawksbill Conservation Project in 2000, this hawksbill sea turtle population is getting another chance to prosper.

Preliminary research conducted by WCS before the project began in 2000, concluded that almost 100 percent of hawksbill nests were poached and consumed by humans in the Pearl Cays. Fourteen years after the project began, poaching rates have decreased by more than 80 percent, making 2014 the most successful year in the project’s history. This is due in part to collaboration with local communities, raising awareness through education, as well as the establishment in 2010 of the Pearl Cays Wildlife Refuge, which according to WCS “safeguards nesting, foraging, breeding and migratory areas for sea turtles, while protecting marine species and important habitat types.” 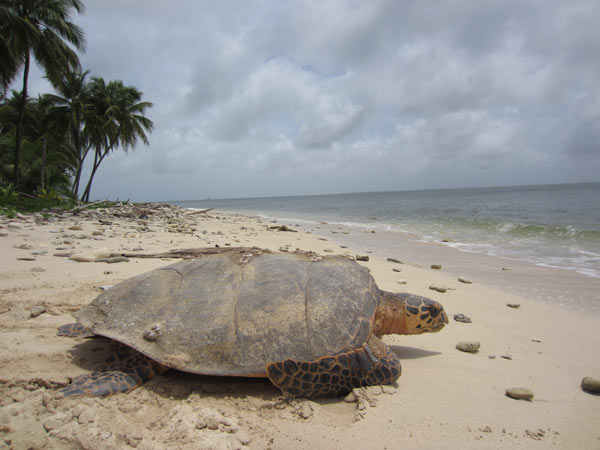 A WCS team in Nicaragua reports a dramatic increase in nesting of critically endangered hawksbill sea turtles in the Pearl Cays region including the highest nest counts since a conservation project began there in 2000. Photo credit: WCS.

Laura Irvine and Pamela Fletcher, WCS members who help run the Nicaragua Hawksbill Conservation Project, explain that a partnership with the local communities has proven key. The partnership allowed WCS to educate students about the turtles, broadcast information on the radio, and give presentations to the local community in order to “foster an improved understanding of sea turtles and the importance of their protection,” According to Irvine and Fletcher.

WCS staff also participated in governmental workshops and commissions at all levels, forming a relationship with stakeholder groups and governmental bodies. According to Irvine and Fletcher, WCS also worked with local law enforcement to help monitor the nests during the hawksbill season as well as create an “incentives project to encourage fishers to donate live sea turtles for release in the wild in exchange for t-shirts and life jackets.”

These methods have completely reinvented the local communities perspective on turtles, helping to foster a relationship with the goal of saving this critical species, according to the wildlife organization. The overall nest success of this season averaged 75 percent, with around 35,000 hatchlings making it out to sea by the end of November.

Furthermore, these projects have allowed scientists to begin tracking the turtles in the hopes of finding out more about their ecological impact. Nicaragua’s reefs are crucial habitats for turtles and other marine species providing shelter, nursery locations, breeding grounds, and food sources. The hawksbill turtles help preserve these reefs as well as contribute to the continuation of the food chain.

“In general, we know that their diet consists of sponges, so they help regulate the sponge populations in coral reef ecosystems to allow for balance and growth of corals, algae and other foundation species that make up the reef” Irvine and Fletcher explained.

They hope to employ more satellite-tags in upcoming years to further this research.

Still, the hawksbill turtle faces many adversities. As eggs, hatchlings, juveniles, and adults, these turtles face danger from humans, natural predators, and the environment. Even though this has been a great year for the hawksbill turtle in the Pearl Cays, their fight for a steady population is not over yet.

“Poaching and the legal turtle harvest in the area present consistent threats, as do other marine activities in habitats that hawksbills use throughout their lifecycle,” said Irvine and Fletcher. “There is still more to be done to maintain and grow awareness for the importance of this species, decrease poaching and accidental catch by local fishermen, and increasing proper management, legal and practical enforcement of marine conservation measures in the area.”