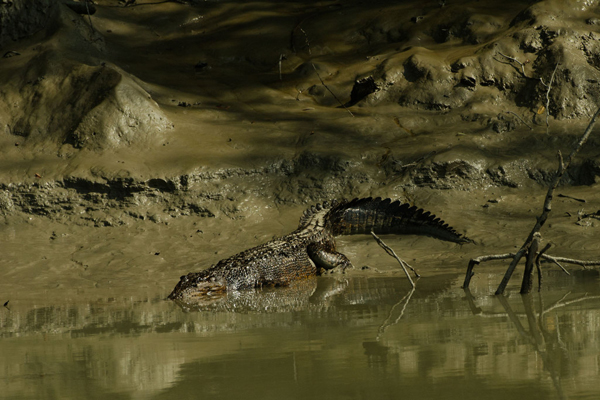 A crocodile wades into oil-tainted waters in the Sundarbans. Photo by: Arati Kumar-Rao.

Last month, an estimated 350,000 liters of fuel oil spilled into the Sundarbans delta on the Bay of Bengal. An oil tanker that had collided with a cargo vessel on December 9th sank into the Shela River, spilling its oil into a protected sanctuary for the rare and endangered Irrawaddy dolphins (Orcaella brevirostris) and the Ganges river dolphins (Platanista gangetica).

The navigation route through Shela River had been unauthorized, yet about 200 boats and ships carrying cargo or oil would ply the route daily. Earlier this month, despite the catastrophe, the Bangladesh government reopened the main Shela River for cargo boats. This would go on temporarily, a government statement said, until an alternate waterway was dredged.

After the news of the oil spill spread, the local Sundarbans inhabitants were the first responders, according to Mowdud Rahman, an engineer and activist with the National Committee to Protect Oil, Gas, Mineral Resources, Power and Ports.

“People started cleaning the highly toxic oil with their bare hands. They did not waste a single moment for any protective gear to come, or any remuneration to be announced,” he told mongabay.com. “Sundarbans is their source of livelihood…so the existence of this forest means a lot to them.” 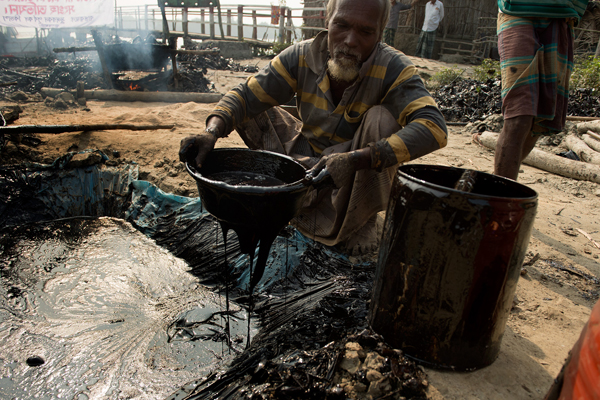 Local shows off oil collected. Clean-up largely fell to local people who had no protective equipment. Photo by: Arati Kumar-Rao.

The government authorities, however, “did nothing other than watching oil consistently getting dispersed all around,” Mohammad Tanzimuddin Khan, a professor at Dhaka University, had told mongabay.com previously. “A privately hired small vessel salvaged the sunken ship after two days of the oil spill in the Shela River!”

Within a few days of the spill, the oil had spread to about 350 square kilometers, covering other rivers and canals.

Despite warnings by experts to act quickly, Bangladesh’s shipping minister had announced that the spill would not cause serious damage. Moreover, a team of specialists from the UN found no visible impact of the oil spill on the forest floor. Their team leader said that “the oil spill’s initial acute impacts to wildlife appeared to be limited,” Dhaka Tribune reported.

But a new preliminary study by researchers from Khulna University in Bangladesh, conducted from the December 11th (two days after the spill) to the 25th, found that the oil spill has had devastating effects.

“The river Shela and its connecting canals and creeks, and some eastern canals of the Pashur river have been contaminated by oil spill,” said the study’s lead author, Abdullah Harun Chowdhury, an environmental scientist with Khulna University. “We studied more than 1,200 square kilometers, and found that more than 500 square kilometers were highly contaminated by oil, with more than 300 milligrams of oil per liter of water.” 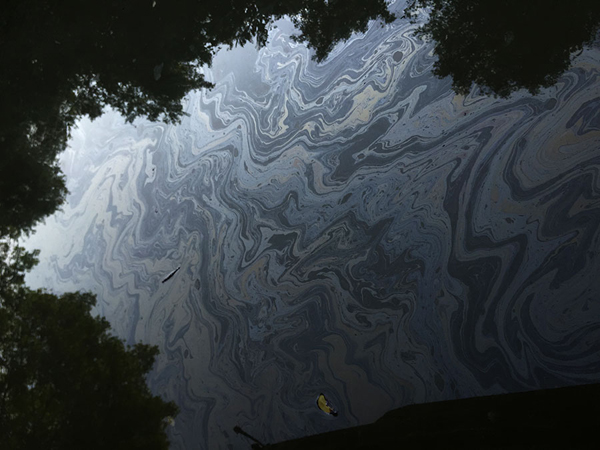 Oil film on the water. Photo by: Arati Kumar-Rao.

In fact, the oil contamination in the 15 sampled locations ranged between 300 to 1,700 milligrams per liter of water. Anything above 10 milligrams can produce lethal conditions for aquatic life.

Chowdhury’s team found that the oil had reached forest floors, depositing on the soil of intertidal zones, leaves and stems of plants, floating fruits, roots, and pneumatophores. The contaminated waters were also marked by a sharp drop in the diversity of phytoplanktons and zooplanktons, and an increase in species that thrive in polluted waters.

This is because oil inhibits sunlight penetration into water, Chowdhury said, which affects photosynthesis and food production by the phytoplanktons.

Sundarbans is the largest single block of mangrove forests in the world, shared between India and Bangladesh. Chowdhury’s team found that the oil had covered seedlings and fruits of Sundari trees, the dominant mangrove species in the Sundarbans, affecting their regeneration. Moreover, the dark oil had coated their breathing roots, or pneumatophores.

Chowdhury had expected that the oil spill would hit the Sundarbans fish populations hard, especially since the spill had occurred during their breeding season. His surveys confirmed his fears. The contaminated locations were indeed marked by an absence of eggs and hatchlings of native and commercially important fish species, mudcrabs, and mudskippers. 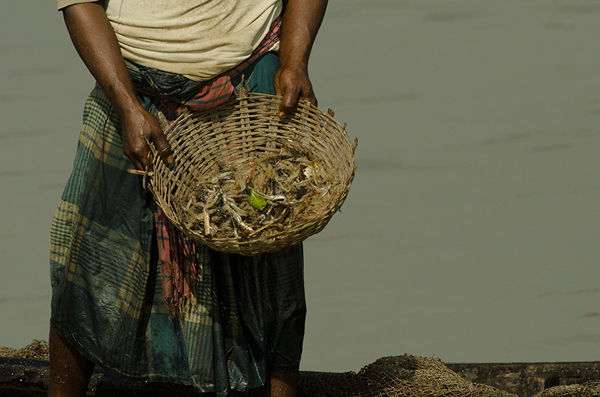 During the course of the survey, Chowdhury’s team did not see any deer, wild boar, or migratory birds. Nor did they see many of the otherwise commonly found birds. But they did find a number of oil-coated animals such as otters, crocodiles, monitor lizards, and frogs. Many of them were dead.

Despite the affected area being in the dolphin sanctuary, the team found just a single dead dolphin. Others may have moved to other creeks and rivers, Chowdhury said.
According to Rahman, coordinated efforts to clean up the spill are still lacking.

“Except some assurances, pledges, and formation of an investigation committee, we have not seen any effective actions from the government,” he said. “Instead, the government reopened the river route through Sundarbans through which 400 vessels crossed the Shela River on the very first day of the opening. This oil spill incident should have been a wake-up call for all of us. But we see the same carelessness as we have been seen before.”

The oil spill was a disaster waiting to happen, Rahman added. Despite protests and warnings, the government is establishing a 1320 megawatt (MW) coal-powered plant at Rampal, just 13 kilometers away from Sundarbans, he said.

“Experts have warned, people are protesting…However, concerned authorities and the India-Bangladesh governments are not paying any attention. Instead, the government has given permits to another company named Orion to establish a 565 MW [coal] power plant very close to Sundarbans…If such activities are not stopped, Sundarbans will lose its glory.” 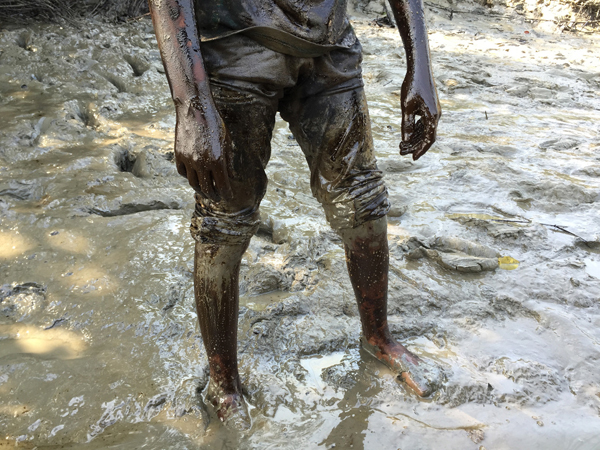 Local children were among the first responders to the oil spill. Photo by: Arati Kumar-Rao. 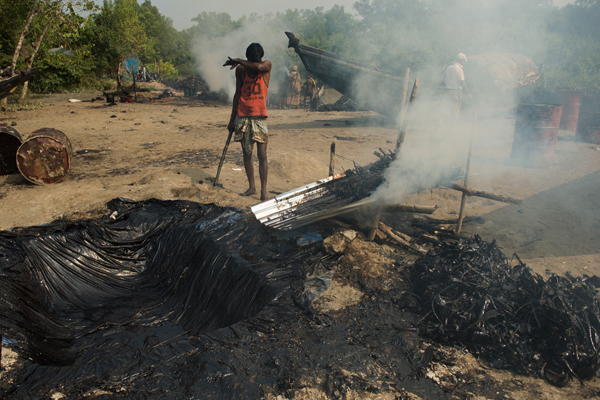 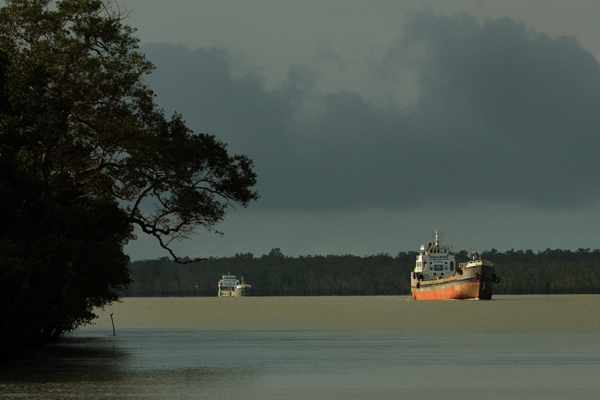 The Sundarbans has heavy tanker traffic, which is only expected to rise as the government builds two coal-fired plants at the edge of the great forest. Photo by: Arati Kumar-Rao.