The tropical montane forests of the Cameroon mountain ranges boast fertile volcanic soils, high biodiversity of grasses and non-woody plants, as well as many endemic bird species that can be found only in this high-altitude region. Yet, many of these endemic bird species may be at risk due to increased nest predation linked with human-induced forest degradation, according to a new study published this week in mongabay.com’s open-access journal, Tropical Conservation Science.

The authors write that the scientific community has long presumed habitat fragmentation in tropical regions causes an increase in bird nest predation, yet this theory has rarely been tested in the field due to limited data on forest degradation in tropical areas. To fill in this information gap, Ondřej Sedláček of Charles University in Prague and his team of researchers worked extensively in the Afromontane forests of the Bamenda-Banso Highlands in northwestern Cameroon examining the impact of forest fragmentation on bird nesting success rates. 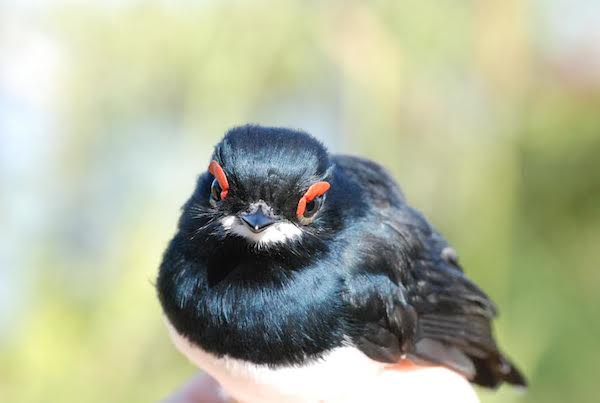 The endemic banded wattle-eye (Platysteira laticincta) of the Bamenda-Banso Highlands. The species is listed by the IUCN as Endangered. Photo by Ondřej Sedláček.

Their study supports the hypothesis that bird nest predation increases along the edges of small, degraded forest patches. They write that nest predation is a critical contributing factor to bird population decline and local extinction in the all-too-commonly fragmented habitats of tropical forests.

Sedláček and his team observed “edge effects” – effects at the transitions between landscape types – on bird nest predation activity in two study sites in the Bamenda-Banso Highlands. They compared nest success rates within a large forested area in the Kilum-Ijim forest to egg-nest survivability in small, fragmented forest patches in the Kefem forest. 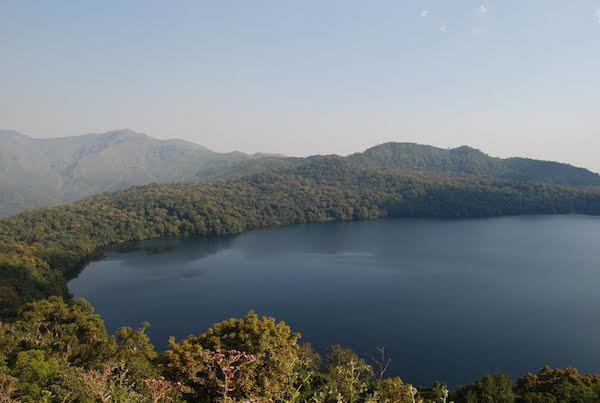 A view of the large montane forest patch Kilum-Ijim forest around Lake Oku in the Bamenda-Banso Highlands. Photo by Ondřej Sedláček.

In November of 2008 and 2009, the researchers placed artificial nests within typical forest shrub understory during the breeding season of many local bird species. They formed the nests in a natural open-cup shape out of cotton material, with forest leaf litter attached to the outsides to make them look more authentic. In each they put an egg from a zebra finch (Taeniopygia guttata). Between 90 and 100 nests were placed within the interior of bird habitat and along the forest edges at both study sites.

The results of their experiment revealed equal overall nest predation in both the large forested area of the Kilum-Ijim forest and small fragmented patches of the Kefem forest. However, a closer look showed an uneven distribution of predation within the two landscapes. The small, fragmented areas in the Kefem forest experienced higher rates of predation along the forest edges than within its interior. Similar results also occurred at the Kilum-Ijim site, yet the effect was not as strong. 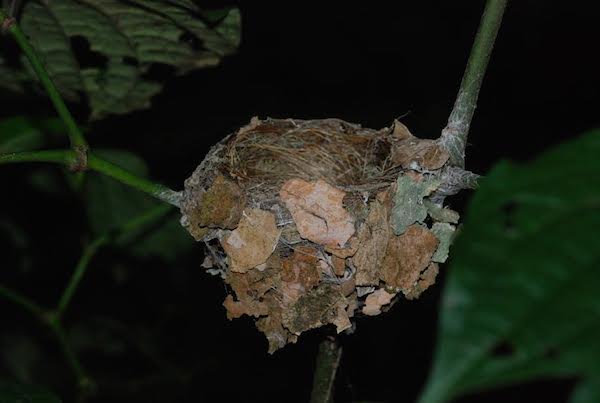 These findings suggest that bird species living in small, fragmented forest patches are at a higher risk to nest predation. Since the majority of remaining montane forest in the region exists as small, fragmented patches, this may be affecting range-restricted bird species of the Bamenda-Banso Highlands, according to the authors.

From their observations, the researchers identified the most dominant nest predators as being small mammals such as mice, squirrels, and shrews. In the tropics, snakes are usually the most common bird nest predators, but because of the high altitude and cool climate, snakes are rare within the Bamenda-Banso Highlands. Additionally, other bird species are also known to raid the nests of other birds. The researchers observed speckled mousebird (Colius striatus) as well as western mountain greenbul (Andropadus tephrolaemus) predating on nests in the Highlands. 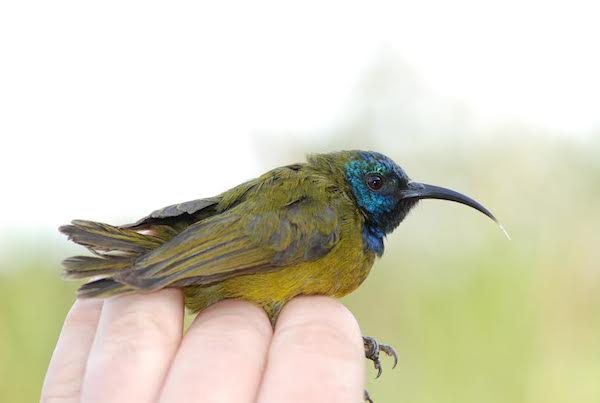 The Cameroon sunbird (Cyanomitra oritis) is endemic to the Cameroon mountains. Photo by Ondřej Sedláček. 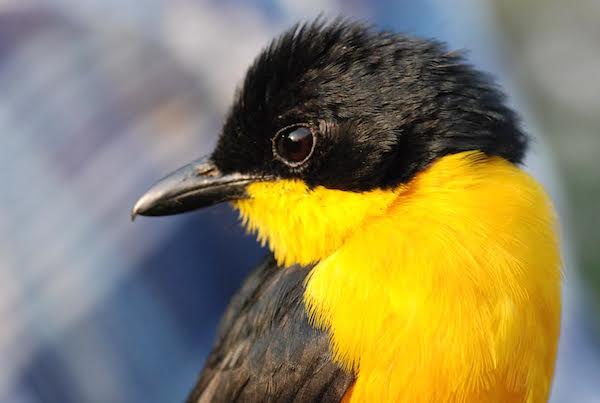 Nevertheless, there are some limitations to the results of this study. The researchers write that their study results should be interpreted with caution when relating them to natural conditions as the nest predation patterns of their study may be different than what is observed in natural situations. For instance, artificial nests and zebra finch eggs may attract different predators than the nests and eggs of native species.

The study results may also have been influenced by differences in the landscape structure of the two forest sites. The Kilum-Ijim site has sharp forest edges and drastic transitions from forest to agriculture land, whereas semi-natural grassland and pastures surround the small forest patches of the Kefem site.

Montane cloud forests in Africa are critically threatened habitats due to dense human populations and favorable agricultural conditions, according to the researchers. The Kilum-Ijim forest located around Mt. Oku is the largest continuous remaining patch of Afromontane forest in western Africa, stretching across 20,000 hectares. 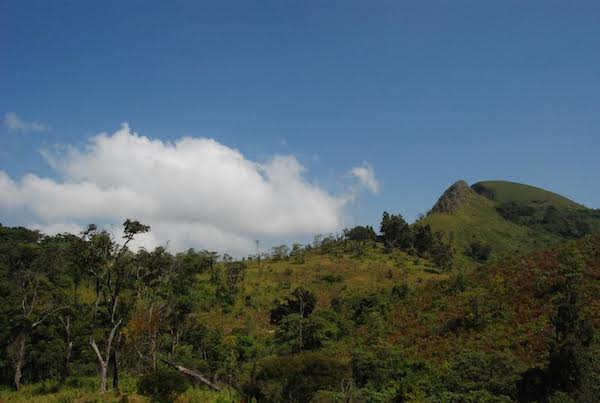 A heavily degraded forest from human activity within the Bamenda-Banso Highlands. Photo by Ondřej Sedláček.

According to Global Forest Watch, the northwestern region of Cameroon lost 9,503 hectares of forest cover from 2001 through 2012. More than 60 percent of the country is covered by dense forest, much of which has been disturbed. Cameroon’s forests contribute to its economy, with the forestry sector bringing in more than $695 million in 2011, amounting to about 2.8 percent of its GDP. In addition, Cameroon’s forests help stabilize climatic patterns within the Congo Basin and worldwide as well as store 2,696 million tons of carbon in living forest biomass.

From 1958 to 1988, the Bamenda-Banso Highlands lost 50 percent of its natural montane forest, according to the study. Despite forest regeneration efforts and designated protected areas, regions along the forest edges are used for intense cultivation, which puts additional stress on the overall ecosystem. Currently, the area supports a human population of about 370,000.

Bushfires are commonly used to remove elephant grass (Pennisetum purpureum) and other weeds from farmland, create grazing land, and to flush out small animals for hunting. 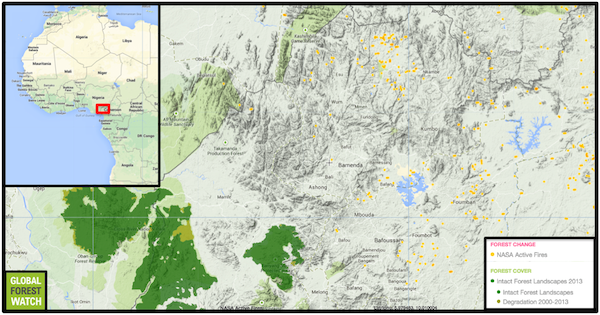 Northwestern Cameroon lost upwards of 10,000 hectares of forest from 2001 through 2013. However, most of its primary forest was lost before then as the region is mostly devoid of large tracts of intact forest. Fires are problematic in the region, with more than 200 detected by NASA satellite data in the past week alone (12/09 to 12/16). Map courtesy of Global Forest Watch. Click to enlarge.

“The unique landscape of montane forests in Bamenda Highlands is really seriously destroyed by man,” Sedláček told mongabay.com. “The situation is most pessimistic during the peak of the dry season, when bushfires dominate the landscape. This activity has the most destructive impact on remaining forest patches…established bushfires end up spreading over the whole mountain.”

As the forest landscape of the Bamenda-Banso Highlands continues to be converted for agriculture, the study’s authors recommend further research be done to more effectively monitor the impacts of human activity on both local birds and entire ecosystems.