Why are great apes treated like second-class species by CITES? 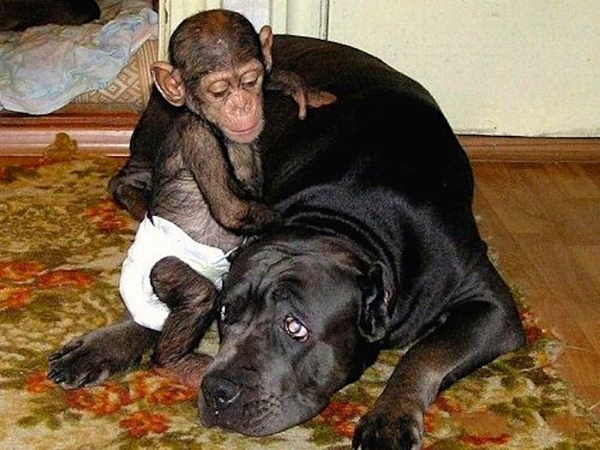 The author found baby chimpanzees offered for sale on Facebook as pets for children. The seller, a woman in Cameroon, promised to provide all necessary documents, including a CITES export permit.

The illegal trade in live chimpanzees, gorillas, bonobos and orangutans showed no signs of weakening in the first half of 2014—and may actually be getting worse—since the Great Apes Survival Partnership (GRASP) published the first-ever report to gauge the global black market trade in great apes in 2013.

“The number of apes being trafficked and confiscated indicates that serious threats remain to wild populations,” said GRASP coordinator Doug Cress. “Either the illegal trade is increasing or law enforcement is improving, but it’s clear there is still a significant population of chimpanzees, gorillas, bonobos and orangutans being captured and sold.”

Live apes are trafficked to supply exotic pet markets, the tourist entertainment industry, and commercial zoos. The biggest demand is for infant apes that are easy to handle and train. Great apes are also facing an illegal, but rampant, bushmeat trade, and a loss of habitat as tropical forests are destroyed by extractive industries such as logging, mining, and oil and gas; industrial plantations; and populations in search of land.

“Recent investigations reveal that major ape dealers have each exported hundreds of apes. This number is only a fraction of the total number of apes captured for the live trade, as apes are prone to high mortality rates during the trafficking process,” said Ofir Drori, founder of the Last Great Ape Organization, based in Cameroon, a country itself implicated in great ape trafficking. “Despite being known to local authorities and to international institutions, these criminals roam free, relying on a system of corruption and complicity that allows them to operate with relative impunity.” 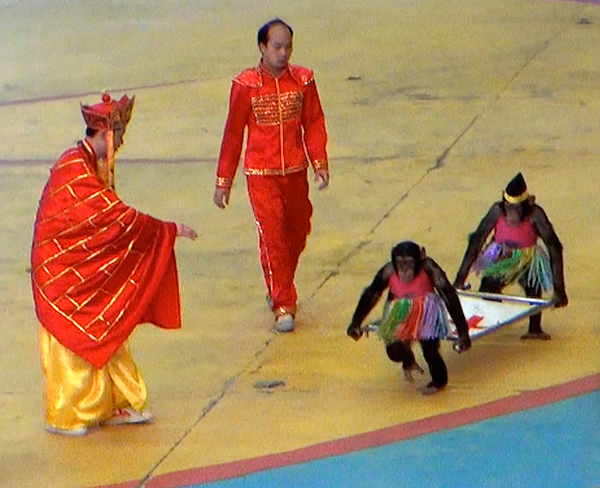 Young chimpanzees are illegally exported for use in entertainment facilities, as here in Guanxi Nanning Zoo in China. Photo by Karl Ammann.

The Convention on International Trade in Endangered Species (CITES) is the first line of defense in preventing the illegal international trade of great apes. All great ape species are listed in Appendix I, the highest level of protection from international trade, making it illegal to export great apes caught in the wild for commercial purposes.

However, in a move that surprised many at the meeting, the Standing Committee’s Norwegian chairman, Øystein Størkersen, prevented the creation of a Great Apes working group, following a closed-microphone discussion with the CITES Secretary General John Scanlon.

“Scanlon telling the SC chair not to allow a working group goes against everything the United Nations and CITES stands for,” said conservationist, Karl Ammann, who has worked for years exposing great ape trafficking. “No transparency, no willingness to crack down on those involved in great ape trafficking.” 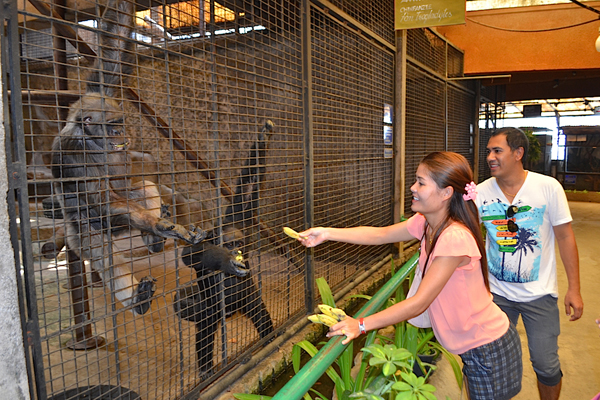 The western African country of Niger, a member of the Standing Committee, requested the creation of the working group. The proposed group would have discussed allegations of irregular great ape trade involving national CITES offices from a document circulated to Standing Committee members by PEGAS (Project to End Great Ape Slavery), a non-governmental organization based in Kenya.

Côte d’Ivoire quickly supported the request, followed by Will Travers of the Species Survival Network and Julie Sherman from the Pan African Sanctuary Alliance, and other NGOs. Judging by the many requests to speak from other Committee members and NGOs, the working group had considerable backing.

Most of the species groups on the agenda have a working group, including elephants, rhinos, Asian big cats, cheetahs, pangolins, sharks and rays, snakes, even sturgeons and paddlefish. Given this, it appears negligent that great apes don’t yet have a working group.

A working group might sound like a bureaucratic, unimportant matter to the uninitiated. But in a CITES meeting little can be achieved without one. Since the plenary sessions of Standing Committee meetings and Conferences of the Parties (CoP) have little time for detailed discussions of its many agenda items, it is standard operating procedure to create a working group for a given issue, which could consist of a species group or a particular issue related to CITES operations.

Working groups meet in parallel with plenary sessions and, after deliberations, the chairman reports back with its recommendations. These could consist of wording to go into Decisions or Resolutions, or proposals for specific actions to take on an issue, such as a warning or even a suspension of trade for a Party because of trading infractions.

Guinea is still subject to a suspension of commercial trade of CITES-listed species that was brought on because of its illegal great ape trade, recommended at the 63rd Standing Committee meeting in late 2012 and confirmed at the 16th CoP held in Bangkok in 2013.

Trade suspension is a serious economic blow for a country that exports wild animals and plants, including timber. For example, Thailand is currently under threat of a CITES trade suspension for its failure to implement recommendations to control ivory trafficking. The government is scurrying to take corrective measures, since species exports under CITES control exceeded $1 billion last year. 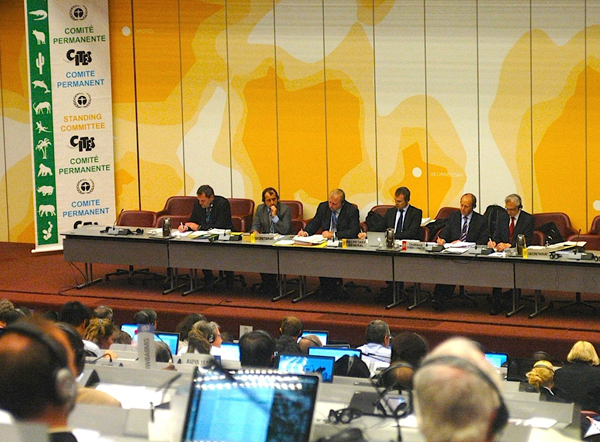 The CITES leadership at the podium decided to prevent the creation of a Great Apes Working Group at the 65th Standing Committee meeting to avoid discussion of illegal trade involving CITES national officials. Photo by Daniel Stiles.

So this leaves us with the question: why did the Secretariat and the Standing Committee chair prevent the creation of a Great Apes Working Group? Both John Scanlon and Øystein Størkersen were asked by Mongabay if indeed Mr. Scanlon advised against Niger’s request to form a working group.

Mr. Scanlon did not reply, but Mr. Størkersen sent a very long response that did not answer the question. The closest he came to answering was to say, “As regards having a side conversation with the staff of the Secretariat, if you were at the meeting, I am sure you will have seen that I did exactly the same in relation to a large number of agenda items, in particular those items where differing views were expressed. It is my usual practice to do so before I sum up on issues that have generated some debate.”

Yes, but what did the Secretariat say to him?

I was at the meeting, and it was the only time I saw Mr. Scanlon interrupt proceedings, turn off the microphones, and appear to instruct Mr. Størkersen how to handle the matter of the request for a working group. On all other occasions, it was Mr. Størkersen who solicited advice from the Secretariat with microphones on.

It appears that the CITES Secretariat is trying to sweep the real extent of great ape trafficking under the carpet. One can only speculate on the motivation.

Great apes and other protected species continue to be exported from Guinea, the Democratic Republic of Congo, and other countries using fraudulent CITES permits sold to traffickers by CITES national officials. Great apes continue to be killed and the young orphans shipped abroad.

It is disturbing that the CITES leadership allows this to continue, and even appears to suppress debate within CITES proceedings on measures to take to bring it to an end.

Will the Secretariat allow creation of a Great Apes Working Group at the 66th CITES Standing Committee meeting next year?

(07/30/2014) Bonobos, endangered great apes, continue to survive in forests south of the Congo River in the DRC, albeit under constant threat of hunting, loss of habitat and the growing demands of an increasing human population. Conservationists have, over the years, tried and tested different conservation strategies to protect the last of the bonobos. And some of these strategies have invited considerable debate.

(07/18/2014) Sankuru Nature Reserve was established in 2007 primarily for bonobo protection. The largest continuous protected great ape habitat in the world, Sankuru is still losing large swaths of forests to burning and other activities, primarily along roads that transect the center of the reserve. However, hope exists, both from human efforts – and from the apes themselves.

(07/09/2014) The Kafu River, which is about 180 kilometers (110 miles) long, is part of a vast chimpanzee habitat that includes forest reserves and several unofficial protected areas. However, this region of Uganda is losing a significant portion of valuable chimpanzee habitat, and at least 20 percent of the forest cover along the Kafu River has disappeared since 2001.