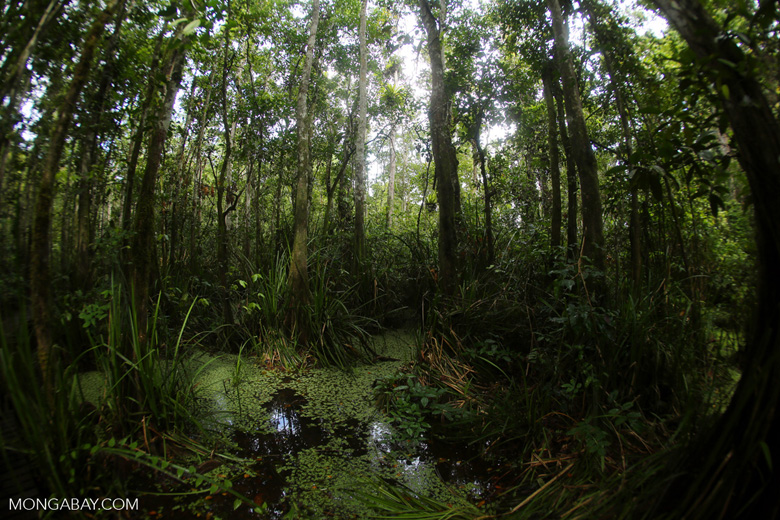 Long considered an unproductive hindrance to growth and development, peat swamp forests in Southeast Asia have been systematically cleared, drained and burned away to make room plantations and construction. Now, as alternating cycles of fires and flood create larger development problems, while greenhouse gas emissions skyrocket, it is time to take a closer look at peat, and understand why clearing it is at best a very bad idea.

What is a tropical peat swamp forest?

Peat swamp forests form in areas where saturated soils or frequent flooding prevent organic material from fully decomposing. As this organic material slowly accumulates, it retains even more water through capillary action: up to 13 times its weight. Acting as a giant sponge that holds in the moisture, peat swamps eventually form a dome of wet organic material that can rise above the surrounding flood levels.

It takes thousands of years for peatlands to form, with organic matter accumulating at 0.5 – 2 mm per year (about the thickness of a quarter). Peat layers over 4 meters (13 feet) are common, while depths of up to 20 meters (65 feet) have been reported.

What are peat swamp forests good for?

A recent inventory of forest biodiversity (Posa 2011) found that 45 percent of the mammals and 33 percent of birds identified in peat habitat are listed by IUCN as either near threatened, vulnerable, or endangered. The fish diversity is unique and relatively unknown, and includes the smallest fish in the world, Paedocypris progenetica (which also competes for the title of world’s smallest vertebrate). Additionally, one out of every ten plant species identified in peatlands are not found anywhere else.

Despite their reputation for inhospitality, tropical peat swamp forests are important for the nearby human populations. Traditional cultures depended directly on them for food, water, fuel and timber sources, as well as traditional medicine and materials for production of domestic goods.

Finally, the unique hydrology of this habitat provides a critical buffer against flooding during the wet season, and insurance against drought in the dry season. The swamp retains heavy rainfall and slowly releases the moisture over an extended period of time. As climate change results in more extreme whether events and irregular precipitation, this ecosystem service is becoming even more critical. 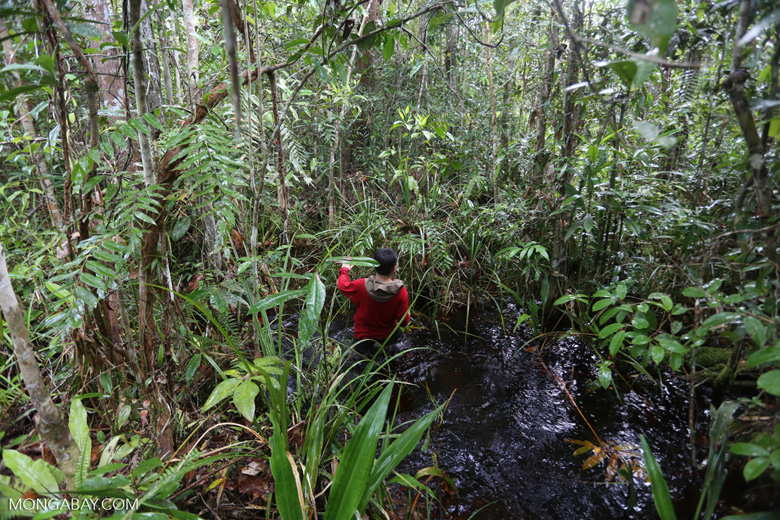 Walking through a peat swamp in Central Kalimantan, Indonesia.

What role do peat swamp forests play in the carbon cycle?

As one can imagine, the accumulation of so much organic material means tropical peat swamp forests store a lot of carbon: up to 20 times more carbon than nearby lowland forests on mineral soil.

When a forest is cut down, the loss of above-ground carbon is obvious. However, less obvious is that 90 percent of a peat swamp forest’s carbon is stored below ground.

The amount of carbon stored in one hectare (2.4 acres) of tropical peat forest depends on the thickness of the peat, ranging from about 1,000 metric tons, for depths of a meter (3 feet) to 7,500 metric tons in peat 13 meters (40 feet) deep. Roughly, tropical peatlands store an average of 2,009 metric tons carbon per hectare. To put this in perspective, by U.S. Environmental Protection Agency (EPA) greenhouse equivalence calculations, the average amount of carbon stored in one hectare of peat is equivalent to the greenhouse gases released in one year by 1,551 passenger vehicles in the United States.

When peat swamp forests are left untouched, that carbon remains locked in the soil. However, if a swamp is drained, the exposure of peat to oxygen allows microbes to break down the organic matter, releasing that carbon into the atmosphere.

In addition to the carbon currently stored in a tropical peat swamp forest, one hectare of healthy peatland sequesters an additional 0.5 – 1 metric tons of carbon per year. When converted to other uses—such as an oil palm plantation—that same hectare releases 10 – 20 metric tons of carbon per year. That is equivalent to the amount of CO2 released by burning 1 tanker truck full of gasoline.

When a peat swamp forest is drained, the carbon that accumulated slowly over 3,000 years can be released in less than 100. Some estimates calculate that as much as 3 percent of the total global emission of carbon dioxide by human activity comes from draining and burning of peat swamp forests in Southeast Asia. 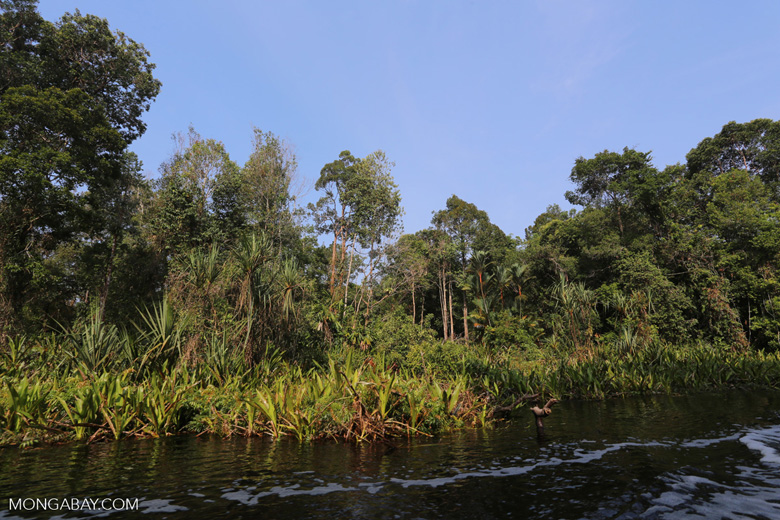 What is the status of Southeast Asia and Indonesia’s peat swamp forests?

Approximately 60 percent of the world’s tropical peatlands are found in Southeast Asia. However, they are disappearing at a rapid rate. Peat swamps are drained and cleared to make room for development, or to convert into oil palm, rubber or other plantation crops. In the last 20 years, the proportion of forested peat swamp in Peninsular Malaysia, Sumatra, and Borneo dropped from 77 percent to 36 percent. Of those that remain, less than 10 percent are found in legally protected areas.

In Indonesia, nearly 20 percent (40 million ha) of the land mass is classified as wetlands, slightly more than half of which are considered peat swamp. These areas are found mostly on the islands of Borneo (Kalimantan), Sumatra, and Papua. Papua alone contains one-third of Indonesia’s peat.

Only 49 percent of Indonesia’s historic peat swamp remains forested, and of that, less than 10 percent is considered pristine, the rest having been selectively logged, partially drained, or otherwise degraded. In Indonesia, peatlands have higher deforestation rates than any other type of rain forest, with the possible exception of mangroves.

Graph: Change in peatland cover in Indonesia and Malaysia between 2000 and 2010. Background satellite image courtesy of Microsoft/Bing Maps and NASA, design by mongabay.com. Click image to enlarge.

Can peat swamp forests be restored?

Areas where peat swamp forests have been degraded or destroyed are difficult to repair. To prevent the immediate loss of carbon through the breakdown of organics and encroachment by fire, the hydrology must be restored. However, trial projects have found that simply re-flooding the peat by blocking drainage canals is not enough.

As the peat compacts due to oxidation or combustion, the soil level drops and the peat loses its ability to re-absorb water. The peat is therefore more susceptible to seasonal changes. During the wet season, areas become fully submerged, which prevents the germination and regrowth of forest species. Instead, water-loving ferns, sedges and grasses replace the native vegetation. During the dry season, the water drains off quickly, and the ferns and sedges dry out and burn readily, causing further degradation of the land.

Fires in peatlands are difficult or impossible to extinguish. The fires can creep below the surface, smoldering deep into the organic buildup where they are inaccessible to crews and protected from rain. There, the fire can burn for years, flaring up during periods of drought when conditions are favorable. Accordingly, environmentalists are concerned about the potential return of El Niño, — which NASA is forecasting could develop later this year. Strong El Niño, events in 1982-1983 and 1997-1998 caused severe droughts across Malaysian and Indonesia that allowed fires set for land-clearing to burn out of control, triggering a massive haze across the region and causing billions of dollars in economic damage. Extensive areas of peatland in Kalimantan and Sumatra have never recovered from those fires — areas that were once inhabited by a wealth of wildlife and utilized by local people are today vast wastelands. 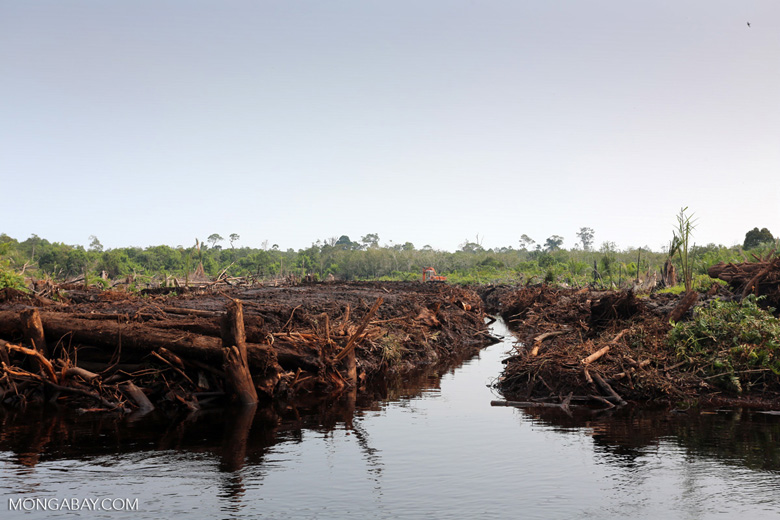