Next big idea in forest conservation? Learning from innovations to make REDD+ work 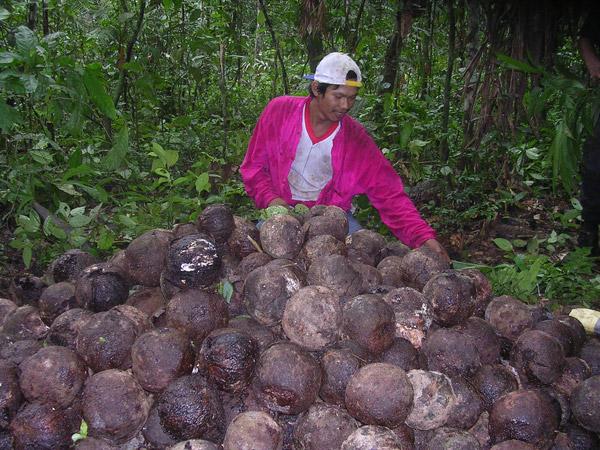 A scientist at the Center for International Forestry Research (CIFOR) in Brazil, Dr. Amy Duchelle coordinates research on the effectiveness, efficiency, equity, and co-benefits of REDD+ initiatives at the sub-national level in Latin America as part of CIFOR’s Gloal Comparative Study on REDD+.

REDD, or Reducing Emmisions from Deforestation and Forest Degradation, is by not a new program. It was founded in the 90s with the aim of creating a financial value for the carbon stored in forests and offering incentives for developing countries to invest in sustainable development.

“The most exciting thing that I see happening in conservation are the ‘messy’ multi-stakeholder processes being led by governments at multiple levels towards reducing deforestation in their jurisdictions,” Duchelle told mongabay.com.

Since its inception, however, REDD has had its ups and downs.

Duchelle believes the biggest hurdles REDD+ needs to overcome in order to be a success are “political will, genuine stakeholder participation, secure land tenure, private sector engagement, incorporation into broader low emissions development strategies that go beyond the forest sector.”

She adds, “Not small challenges!”

Beyond her investigations into REDD+, Duchelle’s research interests include climate change mitigation, community forest management, multiple-use forest management, land use land cover change, and engagement of local stakeholders in the research process. She holds a Ph.D. in Tropical Forestry from the University of Florida.

“In terms of conservation science,” she said, “there certainly does need to be some sort of revolution in the way that researchers communicate their science, which is still too limited to publications in elite journals and presentations at scientific conferences.”

An Interview with Dr. Amy Duchelle 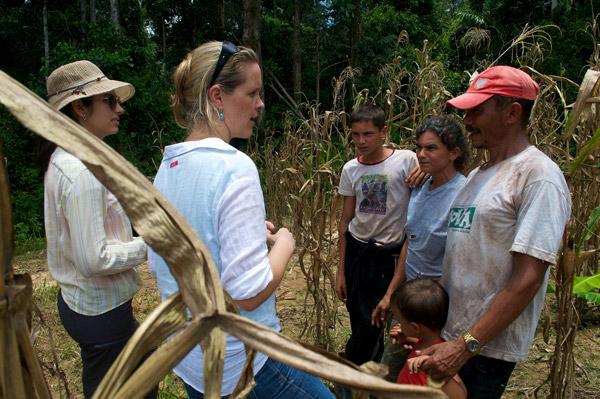 Mongabay: What is your background? How long have you worked in tropical forest conservation and in what geographies? What is your area of focus?

Dr. Amy Duchelle: My scientific training is as a biologist, conservation biologist and tropical forester, with my work focused primarily on the relationship between forest conservation and livelihood development in the Amazon.

In 1995, I spent one year in Ecuador, which was the beginning of my tropical work. I continued research in the Ecuadorian Amazon with the Shuar indigenous people. Then, for about five years, I lived and worked in the dynamic “MAP” tri-national frontier area of Madre de Dios, Peru, Acre, Brazil and Pando, Bolivia. During a good part of that period, I worked directly with Brazil nut producers in all three countries; Brazil nuts are a key non-timber forest product in that region. Since early 2010, I have been involved in CIFOR’s Global Comparative Study on REDD+, and am based in Rio de Janeiro with field sites across the Brazilian and Peruvian Amazon. 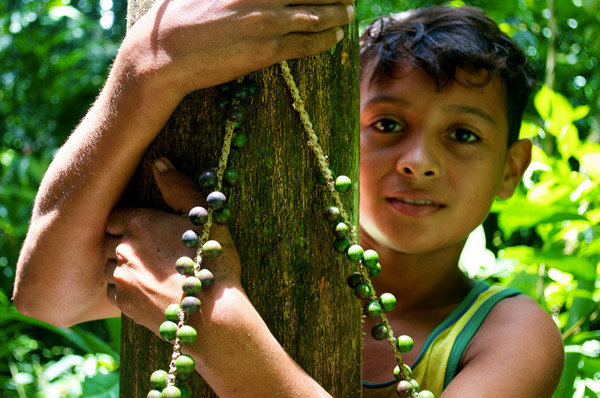 Dr. Amy Duchelle: Yes, CIFOR’s Global Competitive Study on REDD+ aims to inform policy makers, practitioners and donors about what works in reducing emissions from deforestation and forest degradation, and enhancement of forest carbon stocks (REDD+) in tropical countries. In this study, an interdisciplinary group of foresters, biologists, sociologists, economists, political scientists, and anthropologists works together to understand how REDD+ can be implemented effectively, efficiently, equitably, and promote both social and environmental co-benefits. In the subnational component of the study, we are evaluating the early impacts of REDD+ through empirical analysis of socioeconomic and biophysical data at 23 subnational REDD+ sites in six countries (Brazil, Peru, Indonesia, Vietnam, Tanzania, Cameroon), encompassing more than 170 villages and nearly 4,500 households. To ensure effects are appropriately attributed to REDD+, we compare data before and after, and with and without, REDD+ interventions. The results of the study are shared widely and in diverse formats to help inform the design and implementation of REDD+.

Mongabay: What do you see as the biggest development or developments over the past decade in tropical forest conservation?

Dr. Amy Duchelle: The ‘launching’ of REDD+ in Bali in 2007 was a very exhilarating time for many involved in tropical forest conservation, since forests entered the international political agenda in an unprecedented way. Nevertheless, things have turned out a bit differently than expected. The large source of carbon funding tied to an international climate change agreement has not panned out, and REDD+ funding is mostly limited to the aid budgets of donor countries. That said, in lieu of a global climate change agreement and massive financing for REDD+, there have been some unique and innovative advancements on the ground. One interesting example was the creation of Acre’s State System of Incentives for Environmental Services (SISA) in Brazil in 2010, which serves as an early example of jurisdictional REDD+ and stems from the state’s unique history of forest-based development.

Mongabay: What are the prospects for a compliance market for REDD+ taking shape in the near term? 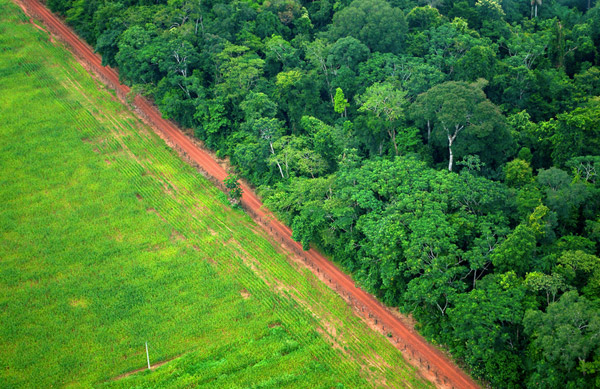 Dr. Amy Duchelle: The hope is that REDD+ will be included in a new global climate change agreement, which could be adopted at the UNFCCC Conference of Parties in Paris in 2015. But, importantly, REDD+ is not just about markets; international discussions are also focused on non-market based mechanisms for funding REDD+. The newly-consolidated UNFCCC Green Climate Fund is an important potential source of funding for REDD+, not only for results-based payments but also to possibly support readiness activities.

Mongabay: What do you see as the biggest hurdles REDD+ needs to overcome in order to be a success?

Mongabay: What’s the next big thing in forest conservation? What approaches or ideas are emerging? What will be the catalyst for the next big breakthrough?

Dr. Amy Duchelle:The most exciting thing that I see happening in conservation are the ‘messy’ multi-stakeholder processes being led by governments at multiple levels towards reducing deforestation in their jurisdictions. I mentioned Acre earlier, but there are many examples of states and municipalities across the Amazon (and elsewhere) taking the lead in innovative approaches to conservation that link to national policy. Check out the Governor’s Climate and Forests Task Force website for some interesting stories at the state and provincial level. The key is coordination on the national level.

Mongabay: What isn’t working in conservation but is still receiving unwarranted levels of support? 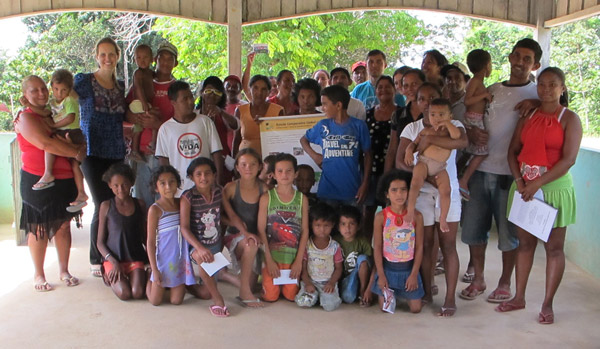 A community meeting in the Transamazon region of Brazil where CIFOR returned GCS results. Photo by: Marina Cromberg.

Dr. Amy Duchelle: This is a tough one, because failure and success come in very different forms in different contexts.

In terms of conservation science, there certainly does need to be some sort of revolution in the way that researchers communicate their science, which is still too limited to publications in elite journals and presentations at scientific conferences. One simple step is making sure that publications are open-access. Another is committing to sharing research results with local stakeholders. A better strategy still is to include communities, practitioners or policymakers as partners in the research process to jointly create research questions, implement the research, analyze the data and disseminate results. We need more good examples of conservation research that demonstrates genuine knowledge exchange with a diverse set of stakeholders.

(06/05/2014) Brazil’s success in reducing deforestation in the world’s largest rainforest has been much heralded, but progress may stall unless farmers, ranchers and other land users in the region are provided incentives to further improve the environmental sustainability of their operations, argues a study published this week in the journal Science.

(05/30/2014) The U.S. government will put financial support behind an initiative that offers finance for emissions-reducing forest conservation projects.

(05/29/2014) After years of discovering new species and setting up protected areas, Neil Burgesses’ career changed. Currently he is focused on community-driven conservation and on how to improve protected areas in Africa’s Eastern Arc mountains region. Neil Burgess has worked in the conservation field for over twenty years, mainly in Tanzania where he also lived for five years.

DRC seeks $1B to save its rainforest

(05/22/2014) The Democratic Republic of Congo is seeking a billion dollars for a plan to protect up to 9 million hectares of rainforests, reports the Financial Times.

(04/28/2014) Letting forests regrow naturally on grazing lands in the tropics offers substantial climate and biodiversity at a low cost, reports a study published in the journal Nature Climate Change.