A camera trap program in Ecuador’s embattled Yasuni National Program has struck gold, taking what researchers believe is the first ever film of a wild nocturnal curassow (Nothocrax urumutum). In addition, the program has captured video of other rarely-seen animals, including the short-eared dog and the giant armadillo.

“The nocturnal curassow is one of the most exciting neotropical birds. It is very rare bird and it is really hard to see in the wild due its crepuscular and nocturnal habits,” Diego Mosquera, head of the camera trap program and manager of Tiputini Biodiversity Station which is run by the Universidad San Francisco de Quito, told mongabay.com. “Not a lot of people have had the chance to see it in the wild and I am inclined to say that this is probably the first footage taken of one in the wild.”

The video also shows the program’s first successful video of the short-eared dog (Atelocynus microtis), one of the least-known mammals in the Amazon (see video at 5:28).

Yasuni, the Cradle of life from Diego Mosquera on Vimeo.

“The short-eared dog is a very elusive and poorly known species. It is classified as Near Threatened on the IUCN Red List but data available on its distribution and status is very scarce, therefore, any new information we can obtain is extremely important to understand them better and to work in long-term conservation initiatives,” said Mosquera. “Although it is very rare, the short-eared dog is more frequently reported in continuous forests, therefore the importance of preserving big areas without impacts.”

The Tiputini Biodiversity Station has been video camera trapping for only about two years—after a successful photo camera trapping program—but has managed to capture stunning footage of many of the Yasuni’s great mammals, birds, and reptiles. However, Mosquera, said one species continues to elude them.

“We would love to capture the bush dog (Speothus venaticus), who is even more rare than the short eared dog. In a long term camera trap project at Tiputini we’ve only been able to record this species in two pictures out of close to 80,000. That gives you an idea of how rare it is.”

Mosquera hopes these videos of rarely seen animals will inspire action to protect these forests and their millions of denizens.

“Forests are not only trees, and my goal is to create awareness on the idea that human survival depends on a web of relationships with other species,” he said. “I think it is vital to question ourselves about the morality of exploiting our last forests for our own benefit. It has been estimated that up to half of all species may go extinct within the next 50 years due to human activity, and if we don’t know what we have and how ecosystems works, little can we do to change this.”

The battle for Yasuni 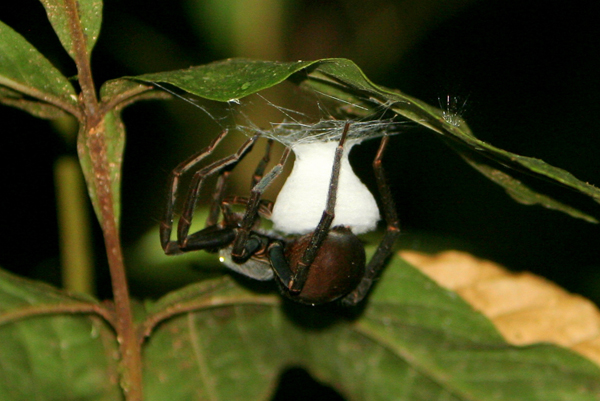 Yasuni National Park, where the camera trap program occurs, is considered likely the most biodiverse place on the planet. However, it is hugely threatened by oil companies. For decades, the oil industry has operated just inside and on the fringes of the park. But now, with the government of Ecuador’s consent, oil companies are moving deeper into Yasuni.

Petroamazonas, Ecaudor’s start oil company, has recently begun operating in the heart of the park, a remote area known as Block 31. While the company had agreed on a roadless operation depending on helicopters to better preserve the environment, analysis of recent satellite imagery has revealed that the company is building large access roads through Yasuni.

The same company was also recently granted permits to begin working in an even more controversial section of the park: the Ishpingo-Tambococha-Tiputinin (ITT) Block. The ITT Block was the center of a unique initiative where the government of Ecuador proposed to leave the vast oil fields in the region untouched, if the international community donated about half of the expected oil revenue or $3.6 billion. However, when money didn’t come in rapidly enough for the government, the President of Ecuador, Rafael Correa, cancelled the program last year.

Since then there has been a massive activist effort to gather enough signatures to put the ITT issue to a national referendum. Activists with a coalition of NGOs under the banner of YASunidos gathered around 850,000 signatures, about 25 percent more than required. However, the National Electoral Council has since thrown out almost 60 percent of the collected signatures, saying they were repeats or fakes. YASunidos, which has dubbed NEC’s actions as fraud, is appealing the issue.

The ITT Block covers about 10,000 hectares, or around 10 percent of the park, on the eastern edge. It is also believed by some to be the most biodiverse section of this already hugely-biodiverse region. Currently, the ITT Block is almost wholly unexplored by scientists.

Currently scientists have identified 153 amphibians (a world record), nearly 600 birds, 183 mammals, which includes over 100 bats (another world record). Moreover, Yasuni is known as the record holder for woody plants. Scientists estimate that Yasuni a single hectare of Yasuni holds at least 100,000 arthropods (insects, crustaceans, and arachnids), which if true would be the highest biodiversity per hectare on the planet. 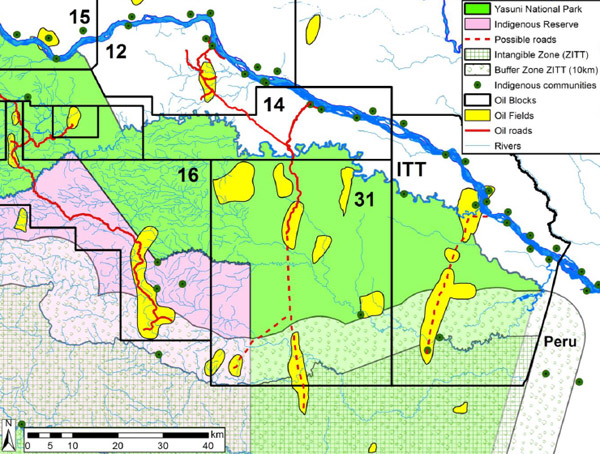 Species on video in order of appearance

(06/13/2014) Decades of oil extraction in the Western Amazon has caused widespread pollution, raising questions about the impact of a new oil boom in the region, according to a team of Spanish researchers presenting at a conference in California.