This is the story of three seals: the Caribbean, the Hawaiian, and the Mediterranean monk seals. Once numbering in the hundreds of thousands, the Caribbean monk seal was a hugely abundant marine mammal found across the Caribbean, and even recorded by Christopher Columbus during his second voyage, whose men killed several for food. Less than 500 years later the species would be extinct—due to overhunting. But scientists have long wondered how the extinct Caribbean monk seal was related to other monk seals: was it more closely related to the Mediterranean species or the Hawaiian one? Now, researchers have an answer and a new seal genus, as well.

“Our paper is the first to firmly solve this riddle, both by producing and analyzing the first DNA evidence from the Caribbean monk seal, and by examining the anatomy of large series of monk seal specimens in museums, mostly from the Smithsonian,” co-author and mammalogist Kristofer Helgen with the Smithsonian Institute told mongabay.com. “The answer is that the Caribbean monk seal is most closely related to the Hawaiian monk seal, demonstrating that the New World monk seals form a group to the exclusion of the Mediterranean monk seal.”

In fact, the New World monk seals are so genetically distinct—and physically different—from the Mediterranean monk seal that the researchers have proposed a new genus for the Caribbean and Hawaiian species: Neomonachus. Prior to this all three species were listed under one genus, Monachus.

“The level of genetic and anatomical difference between these seals and the Mediterranean monk seal matches or exceeds the level of difference between other genera of seals that are universally recognized,” said Helgen, adding that the new genus highlights the seals’ “evolutionary uniqueness—how long each of these lineages of seals has been evolving on independent paths.”

In fact, looking at genetic differences, the study found that the New World species (the Caribbean and Hawaiian) separated from the Mediterranean monk seal over 6 million years ago. But then what happened that split up the Hawaiian and Caribbean monk seals?

“[This] came about via the closure of the Panamanian Isthmus 3-4 million years ago, a momentous geological event that connected the North and South American continents and separated the Atlantic and Pacific Oceans,” explained Helgen.

Unfortunately, the monk seals have not fared well in modern times. Already, we’ve lost the Caribbean monk seal (Neomonachus tropicalis), and both the Hawaiian and the Mediterranean are categorized as Critically Endangered by the IUCN List.

Today only around 1,200 Hawaiian monk seals (Neomonachus schauinslandi) are left on the planet. They are threatened by entanglements in fishing gear and bycatch, pollution, changes in prey distribution, and low genetic diversity after centuries of hunting.

The Mediterranean monk seal (Monachus monachus) is even more imperiled: only about 600 survive. Like their distant Hawaiian relatives, they are imperiled by fishing gear and caught as bycatch. But they have also lost most of their birthing beaches to development and may be facing prey decline due to industrial trawling fisheries. 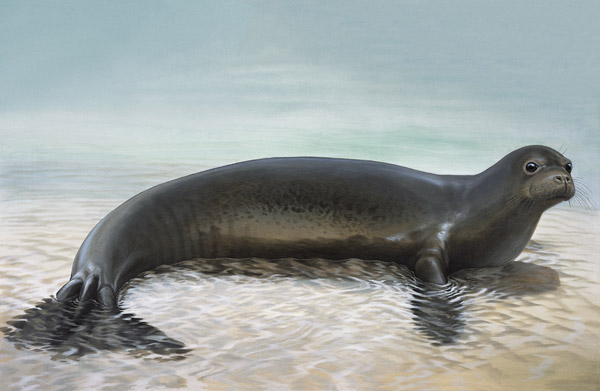 The naming of a new genus has massive conservation implications as it means both the Mediterranean and Hawaiian monk seals are now the sole representatives of a genus.

“[This] raises the stakes involved in their conservation by making it even clearer how much unique evolutionary history of the seal family would be lost by the extinction of either of these Critically Endangered animals,” said Helgen. “The fact that the third member of the group, the Caribbean monk seal, already became extinct in recent decades also underlines how easy it would be to lose these species and how important it is to work toward their conservation at all costs.”

But given that the extinction of the Caribbean monk seal has left open a large ecological niche, would it be possible to one day re-wild the Caribbean with the Hawaiian species? Helgen said while such a idea might work theoretically, there would be many barriers to look into.

“This is a hugely complex question in terms of conservation and politics, but yes, if there was an interest in re-wilding monk seals in the Caribbean, then the Hawaiian monk seal would be the best candidate from a phylogenetic and ecological perspective. Not that I am advocating this though,” he noted. “They are still different species—re-wilding with close relatives will probably never be a perfect fit, and the fact that the Hawaiian monk seal is such an endangered species makes even the thought experiment very difficult.”

The description of a new genus is also a historical occasion: it’s been over 140 years since scientists have described a new genus in the pinniped family, which includes seals, sea lions, and walruses.

“We occasionally identify new species of larger mammals, like the olinguito we announced last year,” co-author Graham Slater, also with the Smithsonian, said. “But to be able to name a new genus, and a seal genus at that, is incredibly rare and a great honor.”