The report — published by the International Institute for Sustainable Development (IISD), the International Institute for Environment and Development (IIED), the Finance Alliance for Sustainable Trade (FAST), Environment and Trade in a World of Interdependence (ENTWINED) and the Sustainable Trade Initiative (IDH) — provides an in-depth review of certification for the banana, biofuels, cocoa, coffee, cotton, forestry, palm oil, soy, sugar, and tea markets. 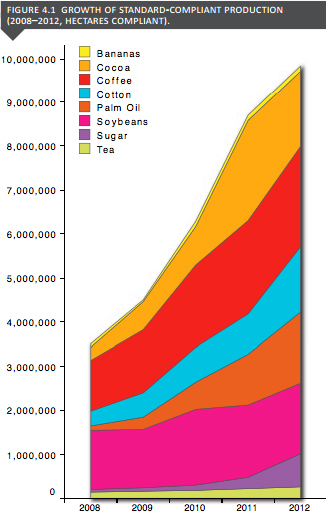 State of Sustainability Initiatives (SSI) Review 2014 reveals a number of important trends in the commodity certification market, including strong growth — indicating uptake by mainstream markets — and increased use of independent monitoring and enforcement. But it also finds chronic oversupply for certified commodities and weakening standards, suggesting that demand is failing to keep pace as certification bodies move to broaden participation.

“While standard compliant production has reached significant levels across select commodities, actual sales of products as ‘standard compliant’ have not grown as rapidly, resulting in significant oversupply (typically between one-third and one-half of total compliant production is actually sold as compliant). This situation means that companies have ample choice for sustainable sourcing (positive outcome), but also suggests that the market may be placing downward pressure on the prices of sustainable products due to oversupply (negative outcome),” the report states. “An analysis of voluntary sustainability standard criteria suggests that newer, mainstream-oriented standards apply criteria of reduced depth and breadth as a means for allowing for more rapid uptake.”

The report concludes that while voluntary sustainability standards “offer an important contribution to the green economy”, they aren’t a silver bullet and “cannot be assumed to deliver sustainable development outcomes.”

Bananas: Three percent of global banana production and 14 per cent of exports were standard-compliant in 2013. Roughly three-quarters of standard-compliant bananas are grown in Guatemala, Colombia, Costa Rica, Ecuador and the Dominican Republic. In 2011, the world produced 107 million metric tons of bananas with a total trade value of $9 billion and a retail value of $25 billion. 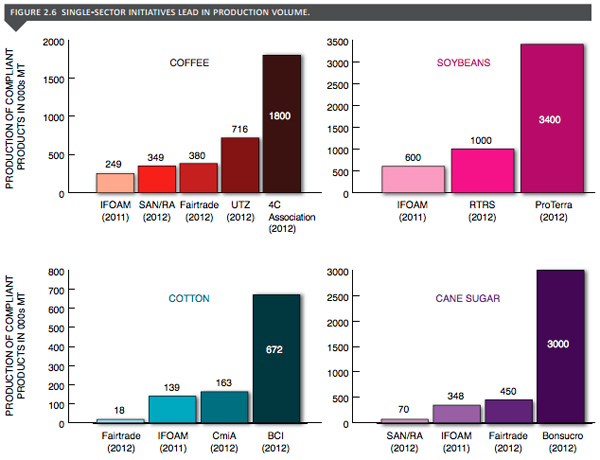 Biofuels: Global biofuels production averaged 124.4 billion liters per year between 2010 and 2012 of which only a tiny fraction was produced under certification schemes. The report notes the importance of cleaning up the sector, but acknowledges the challenges facing voluntary sustainability initiatives in a market where premiums are negligible.

Cocoa: 4.1 million metric tons of cocoa beans worth $8.4 billion were produced in 2012. 22 percent of production was certified of which one third was sold as compliant. 72 percent of cocoa is produced in Africa and 90 to 95 percent of the world’s crop is harvested by smallholders, creating both opportunities and challenges for certification initiatives. The certified cocoa market grew 69 percent ins 2012.

Coffee: 8.2 million metric tons of coffee were produced worldwide in 2012, with the export market valued at $23.4 billion. Certified product amounted to 3.3 million tons or 40 percent of global production.

Cotton: 27.2 million tons of cotton with an export value of $20.2 billion was produced in 2012. Of that only 3.4 percent was produced under certification initiatives, like Fairtrade, Organic, the Better Cotton Initiative (BCI), and Cotton made in Africa (CmiA). Certified cotton production increased by 55 percent in 2012.

Forestry: $233 billion worth of forest products were exported in 2012, representing about a third of the global value of the market. The sector is dominated by two major international voluntary standards: the Forest Stewardship Council (FSC) and the Programme for the Endorsement of Forest Certification (PEFC). By mid-2013, FSC and PEFC had certified 9.1 percent of the global forested area and 23 percent of managed forests. The report states that “although these initiatives do not necessarily serve to address the fundamental causes of deforestation or forest degradation, they can be important tools, especially when combined with policy and legislative efforts, to demonstrate and increase demand for sustainable forest management.”

Palm oil: In 2011, 53 million tons of palm oil were produced from 16 million hectares of plantations, accounting for more than a third of total vegetable oil production. Nearly 90 of cultivation occurred in Indonesia and Malaysia. Palm oil compliant with voluntary sustainability standards — almost entirely the Roundtable on Sustainable Palm Oil (RSPO) — accounted for 15 percent of global production in 2012. The volume of certified palm oil rose by 87 percent annually from 2008 to 2012. 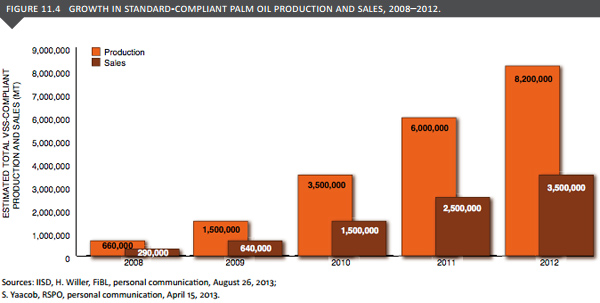 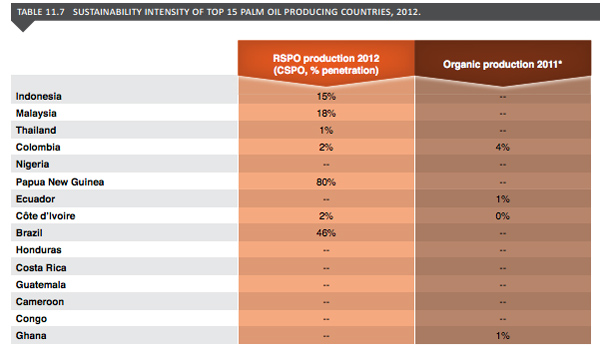 Soybeans: Soybean produced reached 253 million metric tons in 2013. Exports were worth $53 billion. Only 2 percent of production and 1.5 percent of exports were certified under various initiatives in 2012.

Sugar: In 2012, 143 million tons of sugar was produced across 26 million hectares. About a third of that — worth $17 billion — was exported. Only 2.7 percent of all production was standards-compliant (Fairtrade, Organic, Bonsucro and Rainforest Alliance) and sales amounted to 1 percent of global exports.

Tea: In 2011, the world produced 4.7 million metric tons of tea. The market is heavily dominated (85 percent) by multinational corporations, including Unilever, Tata Global Beverages, and Twinings. One third of tea sold on international markets is standards-compliant.