Over the past 25 years, West Africa’s primates have been put at risk due to an escalating bushmeat trade compounded with forest loss from expanding human populations. In fact, many endemic primates in the Upper Guinea forests of Liberia and Ivory Coast have been pushed to the verge of extinction. To better understand what’s happening, a recent study in mongabay.com’s open-access journal Tropical Conservation Science investigated the bushmeat exchange between these neighboring countries.

Ryan Covey with the University of Oregon and W. Scott McGraw with Ohio State University surveyed the Daobly market in the Ivorian town of Taï along the Cavally River, which serves as a natural border between Liberia and Ivory Coast. The slaughter of wild animals within Ivory Coast’s forests is outlawed, yet illegal hunting is still prevalent in the country’s Taï National Park despite the park’s status as a World Heritage Site and the presence of a long-term primate research project. The primate research stations provide some protection, as hunters largely avoid hunting in research areas. While law enforcement is currently inadequate for protecting the entire park, restrictions have pushed hunting pressure into neighboring Liberia, specifically the Konobo District of eastern Liberia.

Composing part of the West African Guinea Forest biodiversity hotspot, Konobo’s large intact forest is considered a high conservation priority and home to many endangered primate species including the Diana monkey (Cercopithecus diana), West African chimpanzee (Pan troglodytes verus), and western red colobus (Procolobus badius). Wild animals hunted in these forests are imported daily to the Daobly market, attracting customers from across the country including towns from as far away as 354 miles (570 km). The Daobly market—established in 1992—was created in part to alleviate hunting pressure in the Taï National Park, but has pushed hunting across the border.

Primate populations are important for assessing a region’s general conservation status because primates are commonly hunted by humans and highly sensitive to habitat destruction. Therefore, a deeper understanding of primate statuses in both Liberia and Ivory Coast could potentially provide information for future conservation management decisions.

Covey and McGraw documented the amount of primate meat traded at the Doably market and used this data to assess the general population status of primates in Liberian forests. They conducted a total of eight surveys on Friday market days in 2009 and 2010. During three hour surveys, they recorded the date, species, and preservation state (smoked or fresh) of all primate carcasses brought into the market via dugout canoe from the Cavally River. Nearly all of the primates brought to the market adults and with help from participants from the Taï Monkey Project, the researchers were able to identify species.

The researchers counted a total of 723 animals including 264 primates that were traded to customers for restaurant or household consumption. The most common of the nine different primate species observed were the lesser spot-nosed monkey (Cercopithecus petaurista), categorized as Least Concern by the IUCN Red List, and the Diana monkey (Cercopithecus diana), considered Vulnerable. With this data, the researchers estimated that approximately 9,464 primates are sold at the Daobly market every year.

To understand how this booming bushmeat market may be impacting primates, the researchers estimated the total primate population in the Konobo forest. In all, they estimated that 342,891 primate individuals lived in the 1,460 square kilometer (563.71 square miles) forest area. According to the researchers, under optimal conditions an area that large would contain a primate population of roughly 428,600 individuals. However, with an annual decrease of over 9,000 primates due to the bushmeat trade in addition to an estimated 20 percent general population reduction over the last few decades, primates in the Konobo District are vanishing at a rate of nearly three percent every year. Moreover, the researchers believe they may be underestimating the decline due to limitations in their research.

“First, there are multiple smaller markets throughout the Konobo District, none of which were surveyed,” the researchers write. “Many primates hunted in the district are consumed locally and are not destined for markets in Ivory Coast. Also, because there are multiple points along the Cavally River where bushmeat enters Ivory Coast from Liberia, the carcasses we observed in Daobly market are almost certainly not the only primates from the Konobo District finding their way into Ivory Coast.”

This was not the only issue with the data. The scientists regularly observed trucks delivering bags of meat to the market that had been purchased and loaded before their survey period. Due to the difficulty of assessing the contents in the bags, they were not recorded. In addition, some buyers and sellers at the market would not allow the researchers to examine or count the content of meat in their bags, contributing to further data gaps.

Still, this study could provide fundamental information for potential primate conservation projects in Liberia where current deforestation rates are relatively low in comparison with Ivory Coast. As deforestation rates due to cocoa and rubber plantations in Ivory Coast continue to rise, Liberian forests could become potentially crucial habitat refugees for wildlife, in particular forest-dwelling primate species. However, in addition to high hunting pressure, Liberia’s forests are facing a rising threat of palm oil plantations.

“Although the preliminary nature of our data preclude us from stating with certainty that any single taxon is being hunted unsustainably, we hope that our market counts might serve as a baseline data for additional surveys in Liberia and Ivory Coast in the near future,” the researchers write. “This study highlights the current hunting problem facing primates throughout West Africa.”

The researchers recommend multiple actions, including population surveys to determine the abundance and distribution of primates in the region and locate areas of high conservation concern. Secondly, they recommend establishing a monitoring system for markets throughout the Konobo District as well as bordering markets along the Ivory Coast. This information would better inform law enforcement by directing them to the most threatened areas. Lastly, the researchers advocate for local education and involvement by residents in primate research and monitoring projects, giving locals the opportunity to benefit from preservation of their wildlife. 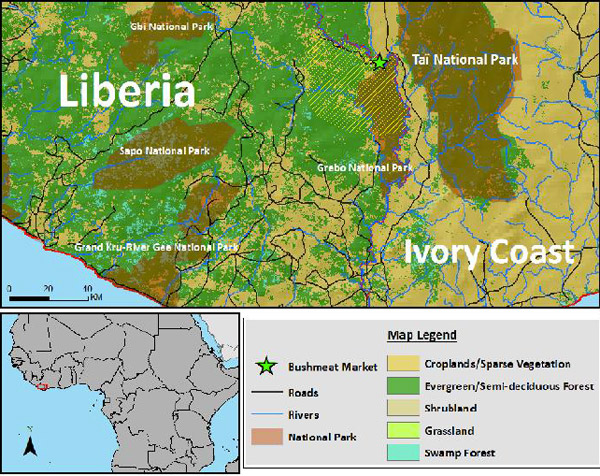 The location of the bushmeat market along the Ivory Coast/Liberia border. Hunting range indicated by yellow, diagonal lines. Map by: Ryan Covey.

Forgotten species: the nearly extinct primate that can be shot on sight

(09/27/2013) The attention paid to charismatic popular primates—such as gorillas, chimps, orangutans, lion tamarins, and even some lemurs—could make one suppose that conservationists have the protection of our closest relatives well in hand; the astounding fact that no primate species is known to have gone extinct in the last hundred years (despite large-scale destruction of their habitats) seems to confirm this statement. However, looking more closely at the data, one finds that not only are many of the world’s primates slipping toward extinction, but a number of them have received little conservation attention. According to the IUCN Red List, a staggering 48 percent of the world’s primates are threatened with extinction: that’s a worse percentage than amphibians which have been ravaged by a global epidemic. And although a handful of the world’s 600-plus primates have garnered conservation adoration, many remain obscure.

(12/16/2013) The thin-spined porcupine, also known as the bristle-spined rat, is a truly distinct animal: a sort of cross between New World porcupines and spiny rats with genetic research showing it is slightly closer to the former rather than the latter. But the thin-spined porcupine (Chaetomys subspinosus), found only in Brazil’s Atlantic Forest, is imperiled by human activities. In fact, a new study in mongabay.com’s open access journal Tropical Conservation Science found that the species remains a target for hunters, despite a reputation for tasting terrible.