Often touted as low-impact, remote oil roads in the Amazon are, in fact, having a large impact on frogs living in flowers in the upper canopy, according to a new paper published in PLOS ONE. In Ecuador’s Yasuni National Park, massive bromeliads grow on tall tropical trees high in the canopy and may contain up to four liters of standing water. Lounging inside this micro-pools, researchers find a wide diversity of life, including various species of frogs. However, despite these frogs living as high as 50 meters above the forest floor, a new study finds that proximity to oil roads actually decreases the populations of high-living frogs.

“Our findings of significantly reduced frog abundance and occupancy along the Maxus oil road were somewhat unexpected to us, as this is a road of minimal width and there is primary forest right up to the edge of the right of way with small forest clearings limited to a very few sites within our study area,” explains lead author Shawn McCracken with Texas State University-San Marcos. The research is one of the first to examine how oil roads may affect canopy species.

The Ecuadorean government and oil industry have both argued that oil roads inside the park are vigorously managed and have little impact on the surrounding environment, as opposed to those elsewhere in Ecuador which have opened up vast areas of the Amazon to settlers and subsequent deforestation. 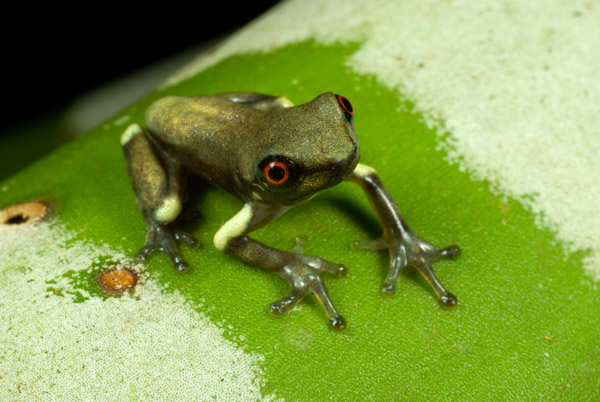 The canopy frog Osteocephalus planiceps found on the leaf of an Aechmea zebrina bromeliad. Photo by: Bejat McCracken.

“During the time between our initial surveys in high-impact disturbed forest and our return to sample bromeliads the Via Auca was being widened and paved,” says co-author Michael Forstner also with Texas State. “We can only speculate that this disturbance and
the increased human pressure enabled by road improvements, eliminated the few Aechmea zebrina communities persisting near the roadway.”

The findings take on a new urgency as Ecuador is moving to allow more oil drilling inside Yasuni National Park, after dropping its Yasuni ITT-Initiative. This ambitious initiative which would have left three remote blocs in the park (Ishpingo-Tambococha-Tiputini) untouched by oil development if the international community agreed to pay half the revenue for the untapped oil: $3.6 billion. Proponents touted the initiative as a bold way to mitigate climate change, conserve biodiversity, and safeguard indigenous people, while some critics labeled it as a new form of “blackmail.” However, funds raised for the initiative would have gone into a United Nations Development Program for funding renewable energy and other select community development projects. But last year, Ecuadorean President, Rafael Correa, said he was dropping the initiative as funds weren’t rolling in fast enough.

“The world has failed us,” Correa said at the time. “I have signed the executive decree for the liquidation of the Yasuni-ITT trust fund, and with this, ended the initiative.”

Correa has said that exploratory drilling will begin this year in the remote ITT blocs. However, activists in Ecuador are working on having a national referendum on the issue. Correa has come out against such a referendum, while his administration has recently shuttered a well-known local NGO, Fundación Pachamama, for its opposition to oil drilling in indigenous areas.

Notably, scientist have dubbed Yasuni National Park as likely the most biodiverse place on the planet. It currently holds the record for the most amphibian species found in a single landscape: 150. To better protect these amphibians as well as the hundreds of thousands of other species found in the park, the scientists say that Ecuador should take another look at how to exploit the oil lying beneath.

“Based on these results, we recommend that natural resource development treat rainforest habitat as an offshore system where roads are not used, employ industry best practice guidelines, and current access roads be protected from colonization and further deforestation,” the scientist write. 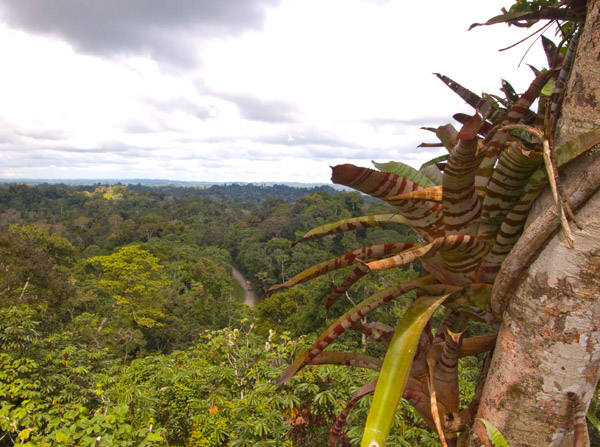 An Aechmea zebrina bromeliad attached to a tree above an oil road in the Yasuni Biosphere Reserve. Photo by: Bejat McCracken. 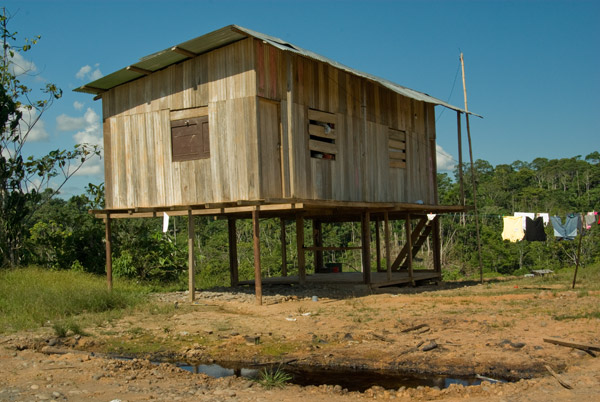 An open pit to a leaking oil pipeline in front of a colonos house along the Via Auca oil road. Photo by: Bejat McCracken. 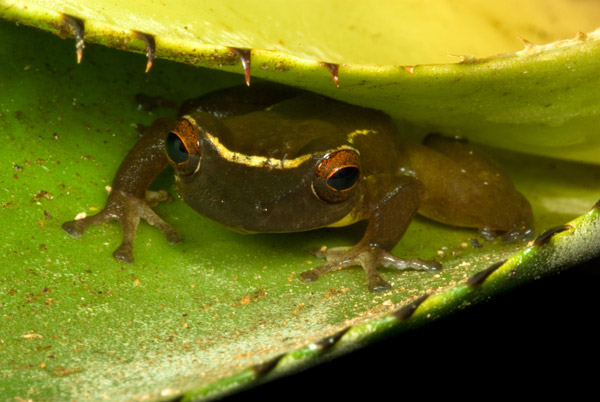 Pristimantis aureolineatus, a bromeliad specialist, between the leaf axils of an Aechmea zebrina bromeliad. Photo by: Bejat McCracken. 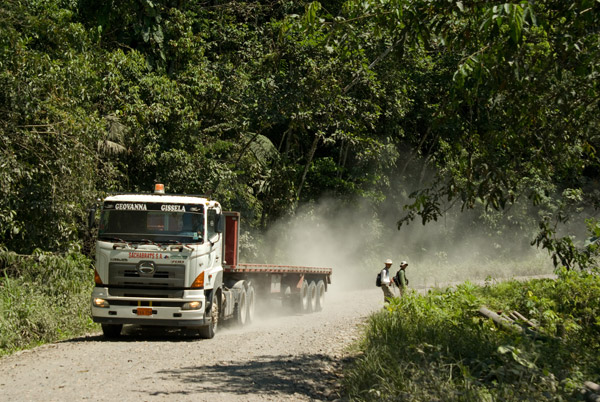 Lead author, Shawn F. McCracken, and an assistant surveying for Aechmea zebrina bromeliads along an oil road in the Ecuadorian Amazon. Photo by: Bejat McCracken.

(12/20/2013) Researchers working in Ecuador have identified a previously unknown species of shrew-opossum, according to a study recently published in the Journal of Mammalogy. Contrary to its mousey appearance, Caenolestes sangay, named after the national park where it was discovered, is actually a marsupial. The team from Pacific Lutheran University set up more than 100 live traps over 15 nights on the eastern slopes of Andes. In the course of their research they recovered five specimens of the new species, each measuring approximately 10 centimeters (3.9 inches) long.