With the Australian, Japanese, and Canadian governments making an about-face on carbon-emissions reduction targets during the Warsaw climate summit, some experts are warning that the global need for solutions offsetting CO2 emissions is passing a “red line.” Land-based mitigation practices comprise one of the solutions on the table as a result of both the United Nations Framework Convention on Climate Change (UFCCC) and the Kyoto Protocol; however, a paper published in Nature Climate Change by an international team led by Brendan Mackey, has raised the looming question of whether or not land-based practices can actually improve CO2 levels as much as hoped.

In their paper, Mackey and colleagues question “to what extent [land-based mitigation] can be legitimately considered an ‘offset’ for fossil fuel CO2 emissions.”

According to Mackey, several of the most convincing effects of increased CO2 emissions in the atmosphere are reductions in the Greenland ice mass and Arctic sea ice cover , which have caused a capital investment and industrial exploitation boom of the new land and sea territories that have become available and the significant global increases in surface land temperatures. 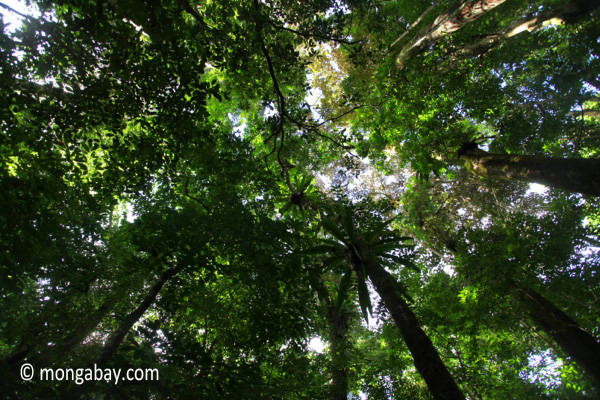 A ceiling of the rain forest in Java. Photo by Rhett A. Butler / mongabay.com

The burning of fossil fuels is the largest global source of anthropogenic (human-caused) CO2 emissions. Human land-use activities such as deforestation, logging, and soil disturbance make up the second largest source.

Mackey and his team estimate that, on average, 0.16 million square kilometers of forests are cleared annually. About half of the world’s forests have already been cleared, leaving 40 million square kilometers still standing. Of this, only 36 percent are primary forests (i.e., old-growth forests), which have not been significantly disturbed to the point at which bio-diversity is altered.

But carbon isn’t released only when trees are cut down or burned, or when the soil is moved, but also from machinery such as trucks, bulldozers and chainsaws used to carry out these activities. Mackey and his colleagues report that it’s hard to know the precise amount of global carbon emissions produced from forest degradation, but estimates suggest that these activities together account for a 50 percent increase in regional emissions compared to deforestation alone.

But an erroneous assumption is that re-planting forests or creating tree pastures quickly offset carbon levels in the atmosphere. Neither of these approaches are viable solutions, according to the international team. Reforestation of areas affected by land-use would reduce atmospheric CO2 by 40–70 parts-per-million by the end of the century. However, this will be greatly overshadowed by simultaneous global deforestation activities and fossil fuel emissions that are projected to increase CO2 levels by 130–290 parts-per-million and170-600 parts-per-million by 2100, respectively.

“These estimates highlight the very modest scope for reforestation to reduce (atmospheric) CO2 compared with both the magnitude of fossil fuel CO2 emissions and emissions from deforestation and degradation,” Mackey and his colleagues write in the paper. “Moreover, complete reforestation of previously cleared land is an implausible scenario due to competing land uses — especially from food production and the need to feed a human population predicted to surpass nine billion by 2050 — along with projected demand for land to produce transport biofuel.”

“When you log or clear a forest, the biomass and soil carbon is oxidized and released as carbon dioxide into the atmosphere,” said Mackey. “If the forest is allowed to regrow (assuming it has not been logged or cleared such that it is destroyed) then theoretically it should be able to grow back the same amount of carbon. However, in the case of a primary forest this can take hundreds to thousands of years.”

Another proposed CO2 offset solution questioned by Mackey and his colleagues involves the assumption that sequestering carbon for 100 years would permanently remove it from the atmosphere. They believe that, somewhere along the way, a pair of zeroes were swept under the rug when calculating the lifespan of carbon.

“If carbon is to be usefully stored (on land, in the ocean or in geological repositories), it must remain stored not just for 100 years, but for more than 10,000 years…Indeed it is accepted de facto in many policy contexts that it is sufficient to maintain stores for 100 years,” reads the paper.

Solving climate change is not going to be as easy as countries planting trees, according to the paper. rapidly decreasing greenhouse gas emissions—whether from fossil fuels or land use changes—is far more important.

“No amount of reafforestation or growing of new trees will ultimately off-set continuing CO2 emissions due to environmental constraints on plant growth and the large amounts of remaining fossil fuel reserves,” Mackey says. “Unfortunately there is no option but to cut fossil fuel emissions deeply as about a third of the CO2 stays in the atmosphere for 2 to 20 millennia.”

(06/06/2013) When Rebecca Goldstone and Michael Stern first arrived in Uganda’s Kibale National Park in 2000 to study monkeys, little did they know then that they would stay on to kick-start an innovative organization, The New Nature Foundation, connecting locals to the park through videos and visits. Nor did they know they would soon tackle the biggest threat to Kibale: deforestation for cooking fuel wood. Since 2006, the couple’s organization has implemented a hugely-successful program that provides biomass briquettes for environmentally-friendly fuel for locals, cutting down on the need for forest destruction.