Yesterday, at the International Coal and Climate Summit—just a couple miles from the ongoing UN Climate Summit—Christiana Figueres delivered a speech unlike anything ever heard at a coal industry meeting before. Figueres, the Executive Director of the UN Framework Convention on Climate Change (UNFCCC), took time off from wrangling world leaders and officials toward a climate agreement to talk tough to an industry currently worth around $3 trillion.

“Let me be clear from the outset that my joining you today is neither a tacit approval of coal use, nor a call for the immediate disappearance of coal,” Figueres told the summit. “But I am here to say that coal must change rapidly and dramatically for everyone’s sake.”

Even before Figueres’ speech, the International Coal and Climate Summit had attracted considerable controversy. Critics say Poland, whose government is a huge proponent of coal, purposefully planned the coal summit to occur simultaneously with the 19th Conference of the Parties (COP) to the UNFCCC in order to undercut progress at the Climate Summit.

“Hosting a coal and climate summit side-by-side is like throwing a cigarette expo next to a meeting of cancer experts,” noted Jamie Henn, Strategy Director for climate NGO 350.org earlier in the month.

Some also criticized Figureres, a Costa Rican native who has headed up climate negotiations since 2010, for even agreeing to speak at the coal summit.

Currently, Poland depends on coal for around 85-90 percent of its energy and has largely eschewed any efforts to move toward renewable energies. In addition, Poland has long been seen as obstructing EU efforts to raise ambitions to combat climate change, causing many to wonder why Poland was hosting this year’s UN Climate Summit in the first place. 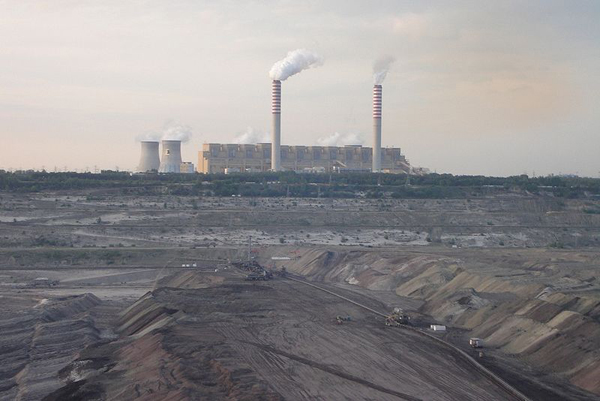 But if the International Coal and Climate Summit was meant to legitimize business-as-usual for the coal industry, Figueres’ speech poured cold water on that.

Figueres began by acknowledging the role of coal in the industrial revolution and in bringing cheap energy to millions, noting “coal has undoubtedly enabled much of our progress over the last 200 years.” But, she continued, the world now knew that coal came with “unacceptably high cost to human and environmental health.”

“The science is clear. The IPCC Fifth Assessment Report (AR5) outlines our predicament. We are at unprecedented [greenhouse gas] concentrations in the atmosphere; our carbon budget is half spent. If we continue to meet energy needs as we have in the past, we will overshoot the internationally agreed goal to limit warming to less than two degree Celsius,” Figueres said, noting that this was “not science fiction, it is science fact.”

She called the IPCC Fifth Assessment Report (or AR5) “arguably the most rigorous scientific report ever written,” saying the report has been “endorsed by 195 governments, including all of those in which you operate.”

Still, Figueres said the coal industry could play a role in a warming world, but only if they followed three “fundamental parameters”: shutter all subcritical coal plants; implement carbon capture and storage (CCS) at all new plants; and—the biggest of them all—leave most of the world’s remaining coal reserves untapped.

According to the AR5, if governments are to make good on their pledge of keeping temperatures from rising less than 2 degrees Celsius, most of the world’s remaining fossil fuel reserves will have to be left untouched. For the first time this year, the IPCC set a global carbon budget, which the world has already blown more than halfway through.

“These are not marginal or trivial changes, these are transformations that go to the core of the coal industry, and many will say it simply cannot be done,” she noted. “But the phrase ‘where there’s a will, there’s a way’ is tantamount to human history because will precedes innovation, and innovation precedes transformation.”

Figueres’ recommendations were backed by a statement from 27 climate and energy scientists, which countered the narrative put forward by the coal summit that simply improving efficiency at coal plants would be enough.

“Even the most fuel-efficient coal-fired power plants emit more than about 15 times the amount of CO2 […] compared to renewable energy systems and more than twice the amount of efficient gas-fired plants,” reads the document, which goes on to state that only coal plants fitted with carbon capture and storage could be considered “low carbon.”

However, once seen as a promising technology, the implementation of CCS has run into several issues, not least of which is the high costs of implementation. On the bright side, the climatologists write that coal energy is far easier to replace with alternatives than liquid fuels and many renewable energies—including onshore wind, biomass, hydropower, and geothermal—have become cost-competitive with fossil fuels.

To this end, Figueres also recommended that coal companies begin employing their vast financial resources beyond coal and start investing in renewable energies.

“By diversifying beyond coal, you reduce the risk of stranded assets and make yourselves ready to reap the rewards of a green economy,” she said.

She noted that these demands didn’t just stem from the scientific community and the UN, but increasingly global society. 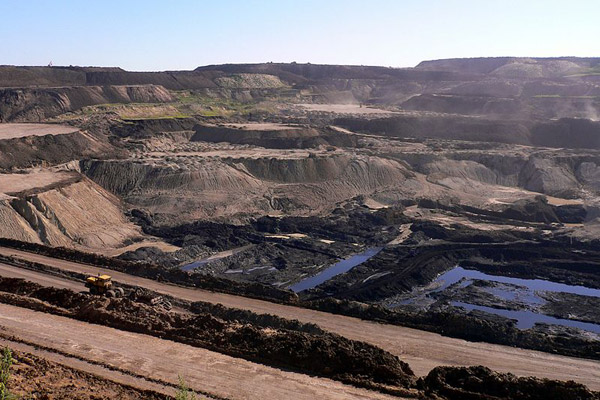 Massive coal mine near Hailar in China. Photo by: Herry Lawford/Creative Commons 2.0.

“Students, faith-based organizations and citizens are asking their investment managers to divest from coal and other fossil fuels,” she said. “Cities choked by air pollution are limiting the burning of coal. Development banks have stopped funding unabated coal. Commercial financial institutions are analyzing the implications of unburnable carbon for their investment strategies. Pricing of [greenhouse gas] emissions is on the rise, evidenced by trading markets coming online around the globe. And, international policy is moving us toward a global low-emission economy.”

Given this, she said the global coal industry must “honestly assess the financial risks of business as usual.”

Coal currently represents around 41 percent of global energy production and, if trends continue, is expected to overtake oil as the world’s biggest energy source. However, possible signs of decline have begun to crop up. In the U.S. coal plants are closing against a glut of natural gas, new regulations, and renewable energy installations. The World Bank, the European Investment Bank, the U.S., and most Scandinavian countries have cut off new funding for coal plants abroad expect in rare circumstances. Perhaps, most importantly, China—which consumes almost half the world’s coal produced—has said its coal consumption will peak in 2015 and has begun announcing a slew of new environmental programs and regulations to deal not only with their carbon emissions, but record air pollution.

Meanwhile, new coal plants are coming up against a more educated and alarmed citizenry. For example, plans to build a coal plant in Bangladesh’s Sundarbans—the world’s largest mangrove forest—led to a five day march that attracted some 20,000 people. In Malaysian Borneo, a protracted civilian campaign led to the cancellation of a coal plant that would have sat on a beach between one the island’s last primary rainforests and healthy coral reefs. 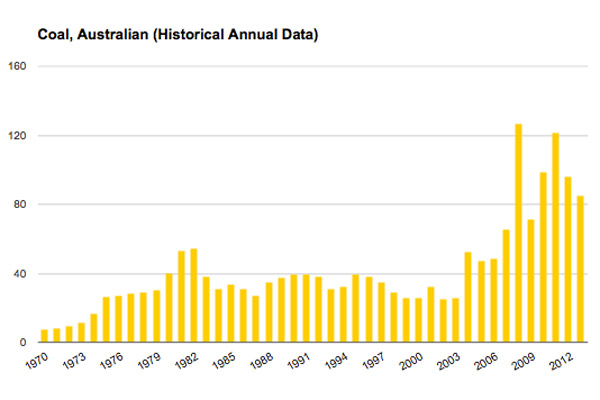 The chart shows the cost of coal in Australia, one of the world largest producers and consumers of coal. As coal and other fossil fuel prices are rising, renewable costs are decreasing. In some conditions, renewable energies are actually cheaper than fossil fuels.

(11/18/2013) In 2009, Japan pledged to cut its carbon emissions by 25 percent based on 1990 levels within 11 years. Four years later—including a nuclear meltdown at Fukushima—and Japan has reset its goal with a new target to cut emissions by 3.8 percent based on 2005 levels at the UN Climate Summit in Warsaw, Poland. But, the new target, which received widespread condemnation when announced on Friday, actually results in a 3.1 percent rise in emissions when viewed from the widely-accepted 1990 baseline.

(11/12/2013) Yesterday, the Filipino delegate to the ongoing climate summit, Naderev ‘Yeb’ Saño, dared climate change deniers to take a hard look at what’s happening not just in the Philippines, but the whole world. Over the weekend, the Philippines was hit by what may have been the largest typhoon to ever make landfall—Typhoon Haiyan. Reports are still coming in days later, but the death toll may rise to over 10,000 with whole cities simply swept away.