Bycatch, a side-effect of commercial fishing in which non-target species are accidentally caught, is linked to severe population declines in several species. Sea turtles are particularly impacted by small-scale coastal gillnetting practices, in which large nets are deployed and indiscriminately snag anything of a certain size that attempts to swim through them. However, that may soon change. A new study in Biology Letters—conducted by researchers at the Joint Institute for Marine and Atmospheric Research at the University of Hawaii, Ocean Discovery Institute, Comison Nacional Areas Protegidas and Pacific Islands Fisheries Science Center—announces the development of new technology that reduces bycatch rates by utilizing ultraviolet light.

“Bycatch of threatened species such as sea turtles and marine mammals is often a major concern because some bycatch rates are so large that it threatens the entire population of those species,” said John Wang, one of the authors of the study. “Gillnets are one of the most ubiquitous forms of fishing around the world. It is relatively low cost, easy to deploy, and offers a livelihood for many peoples in coastal communities. Gillnet fishing is often the most non-specific type of fishing – that is – it often associated with high rates of bycatch.” 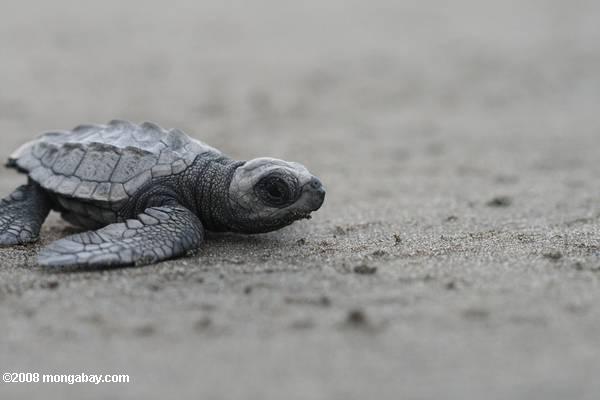 To counter increasing bycatch rates, bycatch reduction technologies (BRT) have been created based on an animal’s sensory cues and behavior. The scientists discovered that loggerhead (Caretta caretta) and leatherback (Dermochelys coriacea) sea turtles are sensitive to ultraviolet light wavelengths while many commercially important fish species have UV-absorbing compounds in their eyes that filter UV light. The scientists found that it is possible to exploit this disparity in visual capabilities to develop BRTs to prevent sea turtle bycatch.

“Understanding the sensory physiology of sea turtles and fish species helped us in choosing to use UV illumination,” said Wang. “By using UV light, we have a used a selective means of communicating to sea turtles but not to fish.”

According to a study, the scientists deployed 11 nets specifically designed to emit UV wavelengths, and found that illuminating gillnets with UV light reduced sea turtle capture rate while having no effect on the total target catch rate for commercial fisheries. In addition, the scientists note that visual-based BRTs can effectively reduce other types of bycatch; nets that are more visible also pose less risk to seabirds. At the time of this writing, testing of illuminated nets has begun in fisheries in Peru, Southern Baja California, Brazil and Indonesia. 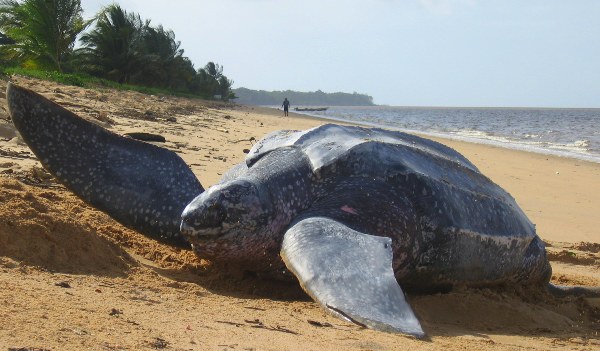 A female leatherback seaturtle camouflaging her nest on a beach in Suriname. Photo by Tiffany Roufs / mongabay.com

The study recognizes that simply providing illuminated gillnets will not completely solve the problem, and that engagement and education of fishermen is equally important.

“One major aspect of our work is to work closely with fishermen in the fishing community,” said Wang. “They are part of all of experiments from the beginning. The fishermen are very supportive; they do not want to catch animals that have no value because it wastes their time, damages their gear, and creates bad press for them.”

(10/15/2013) On an isolated beach in Bird’s Head Peninsula, Indonesia, a female leatherback turtle shuffles out of the ocean and onto the shore, ready to lay her eggs. Under the cover of night she excavates a hole in the sand, depositing anywhere from 80 to 100 eggs inside. Using her flippers she flicks sand over the eggs, hiding them from potential predators. Then, shuffling away, she returns to the turquoise waters ready to make an 8,500-mile journey across the Pacific Ocean to the California coast.