Mangrove forests are one of the most important weapons in the fight against climate change. Not only do they directly store huge amounts of carbon, but they actively capture additional carbon dioxide from the atmosphere and sequester it in their soils. When mangroves are destroyed, huge quantities of carbon are released into the atmosphere, significantly contributing to greenhouse gas emissions. Yet, until recently, little research has been done to identify which mangrove forests store the most carbon and are therefore most important in combatting climate change. However, all this has changed, thanks to a new study showcasing a global map of carbon storage in mangrove forests.

“These results can help guide decisions regarding priority areas for the conservation and rehabilitation of mangroves for climate change mitigation,” said Mark Spalding, principle investigator on the project and marine scientist at The Nature Conservancy.

One of the most striking features of the map is that the amount of carbon stored by mangroves varies enormously between regions. The forests storing the most carbon are found in the equatorial tropics, especially in Southeast Asia, while those in more temperate regions have lower quantities of stored carbon.

“Our model showed that climatic conditions were major drivers of this variability, particularly the temperature, rainfall and seasonality,” Spalding told mongabay.com. “Mangroves do well in warmer conditions, but they also flourish in slightly less saline waters, so while they will grow in the full salinity of the ocean they grow bigger in big deltas and estuaries. In insular Southeast Asia (and in a few parts of Africa and the Americas close to the equator) it is essentially wet year-round, and that counts for a lot.”

“[Mangroves] form narrow coastal strips, or are patchy, broken up by rivers and channels. The presence of water also creates some challenges from mappers working from satellite images. Actually any look on Google Earth will show you that mangroves are very easy to see from space, so it is more a challenge of automated mapping over very large scales.” 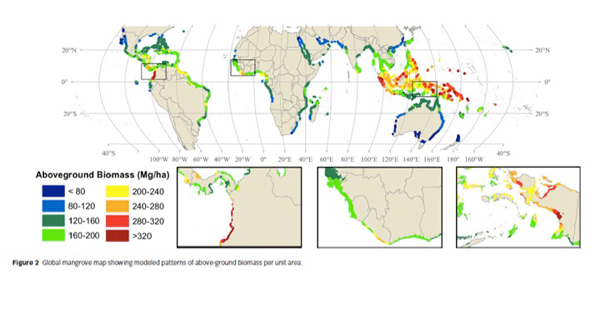 The map of mangrove carbon storage hot spots around the globe. Courtesy of Hutchison, J. et all. Click to enlarge.

The researchers hope that this study and future research will provide leverage and increase awareness of the need to conserve mangroves.

Mangroves are not only known for their ability to sequester and store carbon, but also serve as vital fish nurseries and protect coastal communities from extreme storms and rising sea levels.

“Mangroves have been disappearing faster than most other forest types, and their location is often on prime land for development into urban real estate, agriculture or aquaculture,” Spalding said. “But the huge benefits that derive from mangroves are also increasingly being realized. I’m not optimistic that we are going to halt mangrove losses overnight. On the other hand I do take hope from the remarkable ability of mangroves to recover through natural processes of active restoration.”

The teams were also keen to emphasize the contribution of field scientists to this type of research. 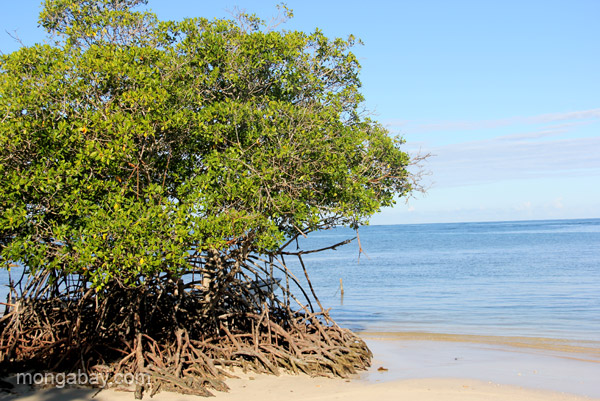 A mangrove before the sea in the Dominican Republic. Photo by Tiffany Roufs / mongabay.com

“The model is built up on the work of field-scientists, and draws on studies from 35 countries. This hard work on the ground by researchers lays the foundation for the task of modeling,” said lead author James Hutchison of Cambridge University. “But it is through the combination of their many stories that we can build up a bigger picture and extrapolate to areas where no one has actually worked.”

Such field studies are far from easy, according to Spalding. Even simple measurements such as tree height and trunk diameter can be difficult and dangerous work.

“Even such basic measures are never, ever, easy in a mangrove forests where you have to work in the tropical heat, walking through thick mud, bitten by mosquitos, always with an eye on tides (and crocodiles or tigers in some forests). Mangroves can be wonderful, fascinating places to visit, by foot or boat, but to work hard in them is another matter.”