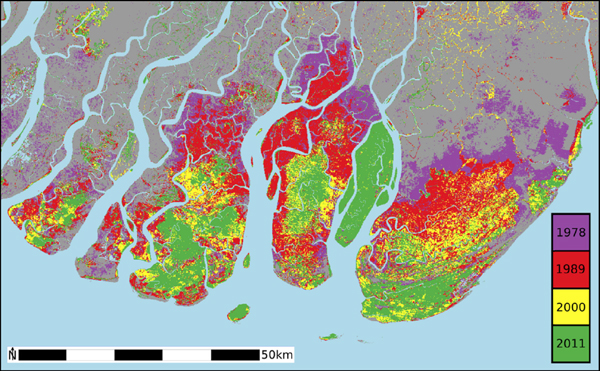 Map showing mangrove land cover in the Ayeyarwady Delta, Myanmar, in 1978, 1989, 2000 and 2011. The large island that has remained completely forested is the Meinmahla Kyun Wildlife Sanctuary. Image courtesy of Webb et al 2013

The research, led by a team of scientists from the National University of Singapore and the Mangrove and Environmental Rehabilitation Network in Yangon, is based on remote sensing and field data. It finds that dense mangrove cover in the Ayeyarwady Delta declined from 2,623 square kilometers in 1978 to less than 1,000 sq km in 2011, indicating an annual deforestation rate of three percent over the period. Most of the mangrove loss is attributed to agricultural expansion, primarily for rice production.

The findings, taken in context with the accelerating influx of foreign investment in Myanmar, portend a dire future for the country’s mangrove forests unless policies are quickly put into place, warn the authors.

“The centrality of agriculture to the Myanmar economy indicates that emerging policies are likely to tip the scales towards agricultural expansion, agroindustrial investment and potentially greater rates of deforestation due to the introduction of well-funded investors, insufficient land tenure agreements, and low governance effectiveness, the authors write. “The broad national challenge is to initiate environmental governance reforms (including safeguards) in the face of significant pressures for land grabbing and opportunistic resource extraction.” 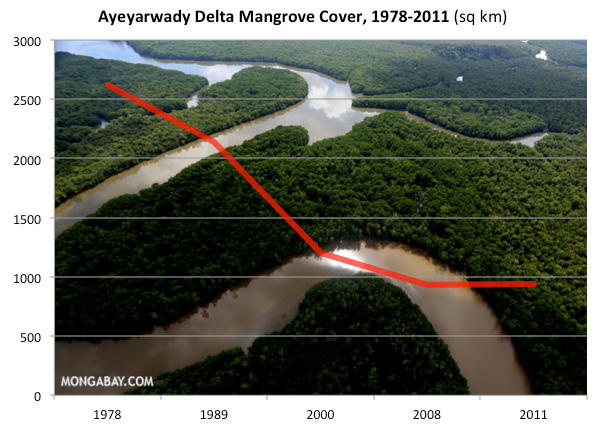 Under a business-as-usual scenario, the researchers project that unprotected Ayeyarwady Delta mangrove forests could be completely deforested by 2026.

“Business-as-usual deforestation scenarios suggest that most, if not all of the unprotected Ayeyarwady mangroves will be lost in the next few decades at a rate faster than other mangrove deforestation hotspots in the region, such as the Mekong Delta from 1965–1999.”

But the authors say that the fate of Myanmar’s mangroves is still far from sealed. Land tenure reform, improved land use planning, the establishment of protected areas, and the implementation of new environmental laws could help ensure the survival of these forests, which provide critical ecosystem services to the delta’s 7.7 million human inhabitants.

Mangroves should be part of solution to climate change

(08/02/2012) Mangroves are under-appreciated assets in the effort to slow climate change, argues a new Proceedings of the National Academy of Sciences paper which makes a argument for including the coastal ecosystems in carbon credit programs.

(12/01/2010) In August, NASA and the US Geological Survey released the first-ever satellite analysis of the world’s mangrove ecosystems. What they found was dire: mangroves covered 12.3% less area than previously estimated. Now, NASA has released images of the world’s mangrove ecosystems (see below), which currently cover 137,760 square kilometers. Yet this number keeps shrinking: mangroves are vanishing rapidly due to rising sea levels, deforestation for coastal developments, agriculture and aquaculture.