Somewhere in the wet pine forests of Chile, a male frog is gulping-up a bunch of eggs. No he’s not eating them, he’s just being a good dad. Darwin’s frogs are known for their unique parenting-style: tadpoles are incubated in the vocal sac of the father. First recorded by Charles Darwin during his world famous voyage aboard the Beagle, the amphibians were common in the native Chilean pine forests until the last few decades. Now, scientists believe that one of the two species, the northern Darwin’s frog (Rhinoderma rufum), may have vanished for good. And the other is hanging on by a thread.

“If Rhinoderma rufum is extinct, this will become the first extinction of an endemic vertebrate species in Chile,” Claudio Soto-Azat told mongabay.com. The lead author of a new paper in PLoS ONE on the two species, Soto-Azat with Andres Bello Universiy in Santiago, adds that, “Hope remains that the species still survives at an inaccessible area.”

Scientists only separated the northern Darwin’s frog from its southern cousin in 1975 after noting several differences in the species, including how far they took the vocal sac-breeding. At this point, the northern species was already vanishing: it was last sighted in 1980.

To determine its current status, Soto-Azat and his team visited several sites where the northern Darwin’s frog was previously found, but found no individuals and heard not a single call. Modeling by the scientists suggested that the species was wiped out in 1982, just seven years after it was described as a new species.

Both northern and southern species lay eggs on the wet ground, but once the eggs hatch the male frogs swallow the tadpoles and keep them safe in their vocal sac. Doing such actually makes the fathers look pregnant. The northern species (Rhinoderma rufum) then moves the tadpoles to freshwater where it releases them. However, tadpoles undergo an extended stay in the vocal sacs of the southern Darwin’s frog (Rhinoderma darwinii), where the males keep them until they are fully grown froglets, about 50 days. 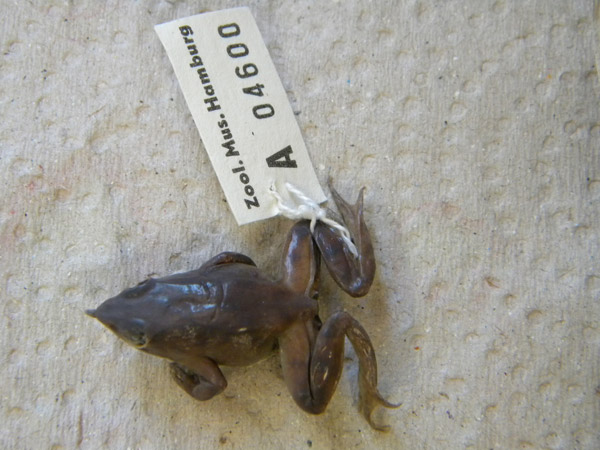 A specimen of the northern Darwin’s frog (Rhinoderma rufum), which may now be extinct. Photo by: Claudio Soto Azat.

“With the extinction of Rhinoderma rufum a unique reproductive strategy (neomelia) that took thousands of years to evolve will be lost forever,” notes Soto-Azat. “This extinction should be a warning call to society, as an indication of the extent of habitat degradation which has lead extinction of a species which was abundant in the past.”

Soto-Azat recommends that the species remain listed as Critically Endangered by the IUCN Red List, but that it is also added to a list of Potentially Extinct species. The species is also currently listed as #45 on the EDGE’s list of the top 100 most endangered and evolutionary-distinct amphibians. If it is gone, it was likely wiped out by deforestation for vast pine plantations.

“The temperate forests of central-south have almost completely disappeared as they have been mainly replaced by commercial pine and eucalypt plantations,” Soto-Azat says. “The reduction of natural forest area in the coastal range of central-south Chile has been calculated to be 67% for the period 1975–2000 and by 1993, Pinus radiata reached 1.24 million ha in central-south Chile, becoming the largest pine plantations worldwide.”

The news isn’t all that better for the southern Darwin’s frog. Currently listed as Vulnerable, Soto-Azat and colleagues say the species should be upgraded to Endangered. They documented 36 populations of the species, but they are “severely fragmented and population sizes were very small (less than 100 individuals/population).”

In some sites, including protected areas and undisturbed forests, the researchers found no sign of the frogs, despite their once being a healthy population. Like its northern cousin, this species has been devastated in parts of its range by deforestation. In addition, volcanic eruptions have killed off some populations. There are also rising concerns that climate change and a lethal amphibian disease, known as chytridiomycosis, may be impacting the species.

According to Soto-Azat more public education and additional research will be vital to saving the species from extinction. If its relative is gone, this is the world’s last frog that reproduces in this bizarre manner and only the second vertebrate on Earth whereby the males carry around the young in a pouch (the other is the seahorse).

Given how quickly the northern Darwin’s frog vanished, time is not on our side. 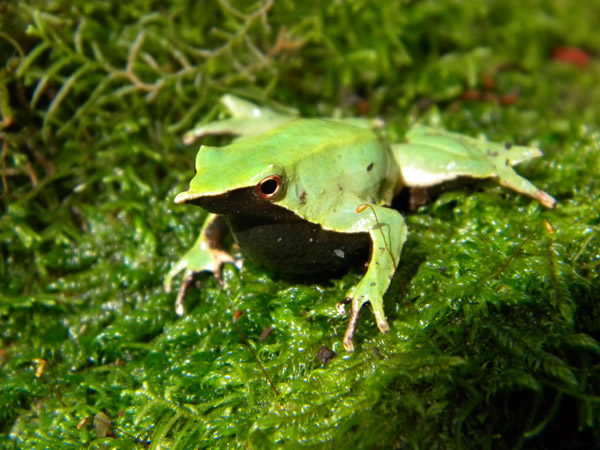 (05/28/2013) Over the past 30 years, amphibians worldwide have been infected with a lethal skin disease known as the amphibian chytrid fungus (Batrachochytrium dendrobatidis). “The disease can cause rapid mortality, with infected frogs of susceptible species dying within weeks of infection in the laboratory.” Jodi Rowley, a herpetologist with the Australian Museum told mongabay.com. “This disease has now been associated with declines and extinctions in hundreds of species of amphibians worldwide, and is a serious threat to global amphibian biodiversity.”