Launched during the peak of excitement about the potential of forest conservation to help mitigate greenhouse gas emissions in 2007, the $47 million initiative aimed to restore 200,000 hectares of peatland that had been drained for the ill-conceived mega-rice project in the mid-1990s. The project, known as the Kalimantan Forests and Climate Partnership (KFCP), would have re-flooded that area by blocking off drainage canals, planted some 100 million trees, and protected 70,000 hectares of carbon-dense peat forest. It expected to reduce carbon dioxide emissions by 700 million metric tons over 30 years.

But the project faced challenges from the start due to approval delays and objections from local communities and officials. KFCP was eventually scaled back to just 10 percent of its original target in terms of the area to be reflooded. Meanwhile a sister $30 million project in Sumatra was canceled completely. 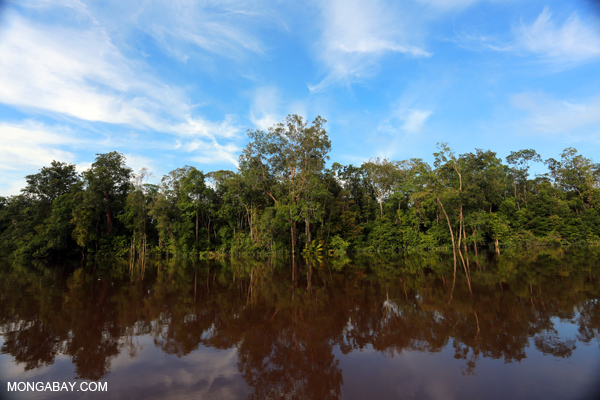 Peat forest in Central Kalimantan in March 2013. Photo by Rhett A. Butler.

While KFCP may continue on in some form, AusAid — Australia’s foreign development assistance agency — made it clear on its web site that the main thrust of the project has ended.

“[KFCP] will not extend in its current form, but both governments are discussing which parts might benefit from additional work in the next 12 months to maximize outcomes,” said AusAid.

“Large-scale blocking of drainage canals will no longer be carried out. However, the methods and plans for blocking canals that were designed under [the project] are valuable. They can be used by others in Kalimantan, elsewhere in Indonesia, and internationally for projects in peatlands that are facing similar challenges.” 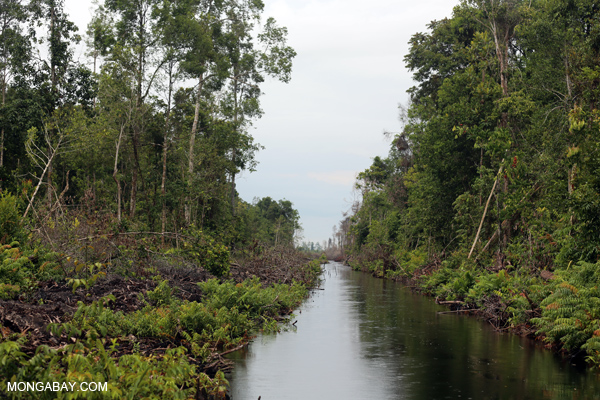 The project’s termination before achieving its objections will likely be viewed as a setback for the Reducing Emissions from Deforestation and Degradation (REDD+) program in Indonesia. To date only a single REDD+ project has been officially approved in Indonesia despite hundreds of millions of dollars in investment over the past six years. Projects have been challenged by Indonesia’s complex bureaucracy and opposition by a range of parties and interests, among other issues.

Deforestation, forest degradation, and peatlands draining is the source of more than three-quarters of Indonesia’s greenhouse gas emissions. The sectors that drive these emissions accounts for less than 5 percent of GDP, seemingly offering a ripe opportunity for helping slow climate change at relatively low cost while potentially yielding other benefits, including rural livelihood development, biodiversity conservation, and protection of other ecosystem services.

(05/30/2013) Rimba Raya, the world’s largest REDD+ project, has finally been approved by the Indonesian government and verified under the Verified Carbon Standard (VCS), a leading certification standard for carbon credits.

(04/11/2013) The basic premise of the Reducing Emissions from Deforestation and Degradation (REDD+) program seems simple: rich nations pay tropical countries for preserving their forests. Yet the program has made relatively limited progress on the ground since 2007, when the concept got tentative go-ahead during U.N. climate talks in Bali. The reasons for the stagnation are myriad, but despite the simplicity of the idea, implementing REDD+ is extraordinarily complex. Still the last few years have provided lessons for new pilot projects by testing what does and doesn’t work. Today a number of countries have REDD+ projects, some of which are even generating carbon credits in voluntary markets. By supporting credibly certified projects, companies and individuals can claim to “offset” their emissions by keeping forests standing. However one of the countries expected to benefit most from REDD+ has been largely on the sidelines. Indonesia’s REDD+ program has been held up by numerous factors, but perhaps the biggest challenge for REDD+ in Indonesia is corruption.