Jaguars (Panthera onca) are the biggest cat in the Americas and the only member of the Panthera genus in the New World; an animal most people recognize, the jaguar is also the third largest cat in the world with an intoxicatingly dangerous beauty. The feline ranges from the harsh deserts of southern Arizona to the lush rainforests of Central America, and from the Pantanal wetlands all the way down to northern Argentina. These mega-predators stalk prey quietly through the grasses of Venezuelan savannas, prowl the Atlantic forests of eastern Brazil, hunt along the river of the Amazon, and even venture into lower parts of the Andes. However, in 40% of the jaguar’s original range the big cat has vanished completely. Population numbers are also down in Mexico, Central America, parts of Brazil, Argentina, Venezuela and the Guianas. The good news is in the Peruvian Amazon: here, the jaguar is doing fine, still very much king of the jungle. In fact, a recent paper in Biological Conservation by the AREAS Amazonian Project found that the jaguar population in three Peruvian conservation areas could number as high as 6,000 animals with densities rivaled only by the Pantanal.

Carried out by camera trapping, the study is one of only a handful on jaguar populations, since these large animals are by no means easy to find.

“Jaguars are wide-ranging and logistics strangle the movements of researchers…jaguars are smart, particularly females, and make capture very difficult. A researcher working in the Amazon, especially away from rivers, can go for years without seeing one of his/her jaguars, so observing behavior has not been possible,” George Powell of AREAS Amazonia Project told mongabay.com. “Most jaguar work in the Amazon basin has been completed in the floodplains of the Amazon, a habitat type that represents only 15% of the Amazon basin. And this goes not only for jaguars, but also for other large mammal studies.”

Powell, with the World Wildlife Fund, is working with Mathias Tobler with San Diego Zoo Global and others on the ambitious and far-reaching AREAS Amazonia Project. 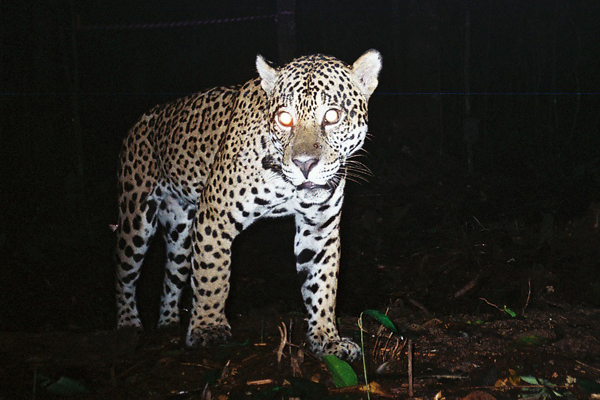 “The overriding objective of the project is to determine area and habitat requirements for the maintenance of a viable ecosystem in the western Amazon,” Powell explains, noting that the focus is on two species: jaguar and white-lipped peccaries (Tayassu pecari). Scientists chose these two, because both require large areas and are especially sensitive to habitat destruction and other human pressures. To conservation planners they are known as umbrella species. In other words, if a landscape is large enough for jaguars and white-lipped peccaries, it will likely support most other mammals.

The area contains a large number of protected areas—National Parks, Indigenous Reserves, private conservation concessions and forestry concessions that allow only selective logging—but as humans continue to press into this primeval forest in growing numbers, these protected areas will become more and more isolated from each other. Forestry concessions, where some timber harvesting is allowed, may prove vital as corridors connecting national parks and other conservation areas together. None of the individual conservation areas are, by themselves, large enough to support the continuation of jaguars in the region, making connectivity vital.

The results of the study are cautiously encouraging; the populations are healthy with numbers higher than expected, including an estimate of around 6,000 jaguars in three of the study areas. 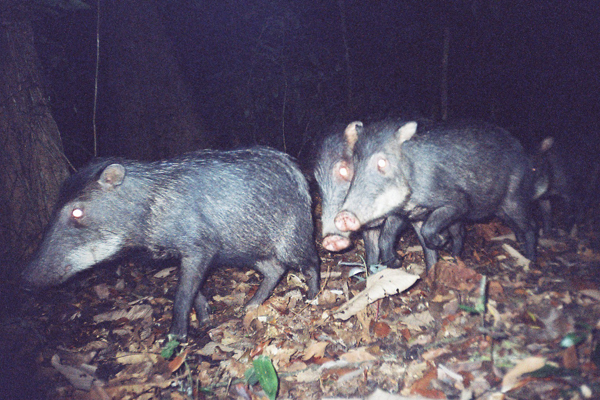 “Our results indicate that there are more females than males in our populations,” says Mathia Tobler. “This is good news since the number of breeding females is usually the limiting factor in a population. Males travel over larger areas and can mate with multiple females.”

The research is pioneering new ways of collecting data on jaguars. An earlier study in the area adjacent to the one in Madre de Dios found smaller population numbers. While this could be due to higher hunting of jaguars and their prey species, it could also be due to more rigorous research methods, including more camera traps used in the current study.

“[Jaguars] are hard to observe and following them by radio telemetry in a dense forest with no roads is almost impossible. Only recently technologies such as camera traps and GPS collars became available that now allow us to better study this species,” Tobler explains.

Right now, the research is still preliminary and needs to be continued and expanded. In the future, the project hopes to look at indigenous reserves as well as the longer-term effects of logging and other impacts on the region. For the present though, the survival of the jaguar in the Amazonian lowlands looks good. With the continued dedication of researchers like those in the AREAS Amazonia Project, we can hope that the big cat continues to be king of one of the most biodiverse areas on the planet.

Chasing down ‘quest species’: new book travels the world in search of rarity in nature

(02/13/2013) In his new book, The Kingdom of Rarities, Eric Dinerstein chases after rare animals around the world, from the maned wolf (Chrysocyon brachyurus) in Brazil to the golden langur (Trachypithecus geei) in Bhutan to Kirtland’s warbler (Setophaga kirtlandii) in the forests of Michigan. Throughout his journeys, he tackles the concept of rarity in nature head-on. Contrary to popular belief, rarity is actually the norm in the wildlife world.

(06/06/2012) As the highly-lucrative palm oil plantation moves from Southeast Asia to Africa and Latin America, it brings with it concerns of deforestation and wildlife loss. But an ongoing study in Colombia is finding that small palm oil plantations may not significantly hurt at least one species: the jaguar. Researchers in Magdalena River Valley have taken the first ever photos of jaguars in a palm plantation, including a mother with two cubs, showing that the America’s biggest cat may not avoid palm oil plantations like its Asian relative, the tiger.