Even as concentrations of carbon dioxide in the atmosphere hit 400 parts per million (ppm) for the first time in human history last week, a new study in Nature Climate Change warns that thousands of the world’s common species will suffer grave habitat loss under climate change.

“While there has been much research on the effect of climate change on rare and endangered species, little has been known about how an increase in global temperature will affect more common species,” says lead author Rachel Warren from UEA’s school of Environmental Sciences and the Tyndall Centre for Climate Change Research.

Looking at the habitat requirement so of 48,786 common land plant and animal species, scientists found that 34% of animals and 57% of plants will see over half of their habitat lost by 2080 if temperatures rise 4 degrees Celsius above the pre-industrial average. According to the study, plants, reptiles, and amphibians are the most vulnerable, while the Amazon, Central America, Sub-Saharan Africa, and Australia are expected to be the hardest hit.

Even worse, Warren says the estimates are “probably conservative” since they didn’t take into account rising extreme weather, disease, and pests, adding that “animals in particular may decline more as our predictions will be compounded by a loss of food from plants.”

Such catastrophic losses would have a major impact on humans as “these species are important for things like water and air purification, flood control, nutrient cycling, and eco-tourism,” according to Warren.

While nations have pledged to keep global temperatures from rising above 2 degrees Celsius, that goal appears increasingly elusive as global greenhouse gas emissions continue to rise year-after-year. If business as usual continues, temperatures could rise well above 4 degrees Celsius by the end of the century.

However, the study also finds that if nations keep their current goals on climate change (i.e. temperatures don’t rise above 2 degrees Celsius) than the loss to common species would be mitigated significantly. But time is not on our side: if emissions peak in 2016, losses to species would be reduced by 60 percent, while waiting until 2030 would mean losses reduced by only 40 percent. 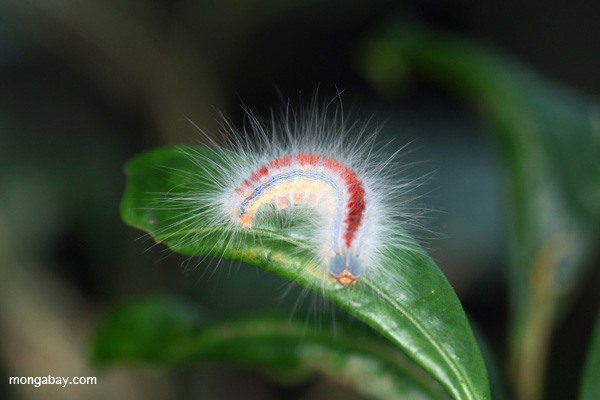 Unidentified red caterpillar in the Amazon. The new study finds that Amazonian wildlife will be hit especially hard by climate change. Photo by: Rhett A. Butler.

(02/05/2013) Arguably one of the toughest animals on Earth, the wolverine (Gulo gulo) may soon find itself protected under the U.S.’s Endangered Species Act (ESA) as climate change melts away its preferred habitat. Last week, the U.S. Fish and Wildlife Service (FWS) announced it was proposing to place the world’s largest terrestrial mustelid on the list. Only 250-300 wolverines are believed to survive in the contiguous U.S.

(01/23/2013) Sandy, Irene, Katrina… Hurricanes are fast becoming household names and have many people worried over the connection between extreme weather and the amount of greenhouse gases people are pumping into the atmosphere. No one can predict for sure what will happen decades or centuries from now as such gas concentrations increase. But scientists have a pretty good picture of what did happen in the past; greenhouses gases were released into the atmosphere in massive amounts at least once before—around 56 million years ago.

(01/02/2013) In the western U.S., few trees generally grow in higher altitudes than the whitebark pine (Pinus albicaulis). Providing shelter and food for bears, squirrels and birds, the whitebark pine ecosystems also help regulate water flow from snowmelt. But, according to a new study in the Proceedings of the National Academy of Sciences (PNAS), climate change has produced a novel threat for these high-altitude forests : mountain pine beetles (Dendroctonus ponderosae).