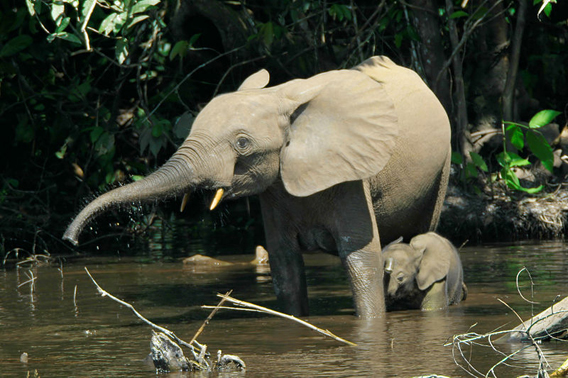 Elephants are vanishing. The booming illegal ivory trade is decimating the world’s largest land animal, but no place has been harder hit than the Congo basin and its forest elephants (Loxodonta cyclotis). The numbers are staggering: a single park in Gabon, Minkebe National Park, has seen 11,100 forest elephants killed in the last eight years; Okapi Faunal Reserve in the Democratic Republic of the Congo has lost 75 percent of its elephants in fifteen years; and a new study in PLoS ONE estimates that in total 60 percent of the world’s forest elephants have been killed in the last decade alone. But what does that mean for the Congo forest? Scientists have recently begun to argue that elephants are key seed dispersers for tropical trees, and a new study undertaken in the Salonga National Park in the Democratic Republic of the Congo (DRC) in Forest Ecology and Management makes the ecological connections unmistakable. When forest elephants vanish, they will take a variety of important tropical tress with them.

“[The] Congo forest without elephants would certainly lose part of its soul, but elephant extinction with their seed dispersal services would also affect the entire plant community,” lead author David Beaune with the Max Planck Institute for Evolutionary Anthropology told mongabay.com. By eating fruit—lots of fruit—elephants ingest thousands of seeds. They expel this seed menagerie often miles away from the tree where they ate it, successfully dispersing seeds far-and-wide. This makes forest elephants “important gardeners of the forest,” says Beaune, so important in fact that when elephants go extinct in a part of the forest, important trees are unable to reproduce.

“Certain plant species that co-evolved with megafauna such as elephants have developed fruits and seeds adapted to these large seed dispersal vectors (i.e. the megafaunal syndrome with large seeds and fruits, specific attractants for elephants, etc.),” explains Beaune. “If we can’t replace elephants, then the reproduction of these plant species is hugely compromised.”

In his study, Beaune and colleagues looked closely at 18 tree species that they suspected were dependent on elephants in Salonga National Park, where forest elephants are practically extinct. The team focused their surveys only on young trees.

“The last generations [of trees] have not experienced elephant ecological services. If there is recruitment of young [trees], the populations might deal without elephant,” Beaune says. The scientists found that 14 of the 18 target trees (78 percent) were no longer reproducing enough young to replace old trees in the absence of elephants.

“Even worse, we barely found any seedling for certain species in our 13 hectare of census, but neither in the rest of the forest that I daily studied,” Beaune says. “We found some species able to cope with rodents for secondary dispersal but nowadays the new generations would be more clumped than elephant-dispersed elders.”

Even for those species that are still spread by other animals, without long-distance elephant dispersal their future is in jeopardy, especially in an age of worsening climate change and deforestation. The loss of elephants will likely result in co-extinctions, meaning the extinction of one species (in this case forest elephants) directly leads to the extinction of a species dependent on it (elephant-dispersed tree).

“These tree populations are unfortunately an example of local co-extinctions with the healthy old trees still present,” says Beaune, who adds that the old stranding trees “[gives] the illusion that the population is fine while it is most probably virtually dead.”

Unable to re-produce successfully without elephants, these tree species are suffering from what scientists call “extinction debt.” While still present, they will eventually vanish without direct human conservation efforts.

“Elephant protection is the top priority, it is pointless discussing the matter, it is merely stating the obvious of which nobody takes any notice,” says Beaune. Even as they are vanishing, elephants are currently one of many species being discussed at the ongoing Convention on International Trade in Endangered Species (CITES) meeting in Bangkok, Thailand. Demand for ivory largely comes from East Asia, including Thailand, China, Vietnam, and the Philippines.

If the elephants continue to vanish, Beaune says that “we could not replace elephant services and efficiency but we might keep seeds and cultivate seedling to conserve the populations until the return (or not) of the pachyderm.”

The loss of such trees will lead to an overall decline in biodiversity. The forest would become more “simplified,” according to Beaune, with trees whose seeds are spread by wind given a sudden advantage. No forest species would likely be immune from the change.

“These trees also feed many herbivores and frugivores (fruit-eaters) such as bats, birds, insects and other mammals. Consequently the loss of these tree species can also affect them. For example, chimpanzees and bonobos in certain forest areas rely on the fruits of Irvingia gabonensis for months. This could probably be the same for certain pollinators, parasites, etc. Cascade effects might be expected, but [only] after the death of the last adult trees,” says Beaune.

But the initial impacts could spread well beyond the 18 target trees Beaune and his team looked at, previous research has documented 335 species of tree in the Congo that are dispersed by forest elephants. Without elephants, the structure of the Congo rainforest could change entirely, a shift that’s already started but whose total impact might not be known until it’s too late. 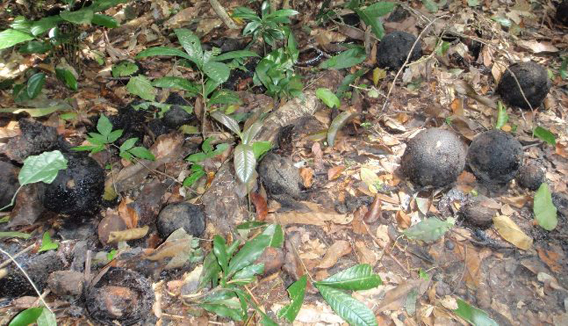 Fruits of Mammea africana rotting on the ground without dispersal. The majority of plants in the Congo depend on animals for dispersal. Photo by: David Beaune.

While bonobos are neutral seed dispersors for Irvingia gabonensis, they rely on their fruits for several weeks, thus relying on elephants for their dispersal abilities. Photo by: David Beaune. 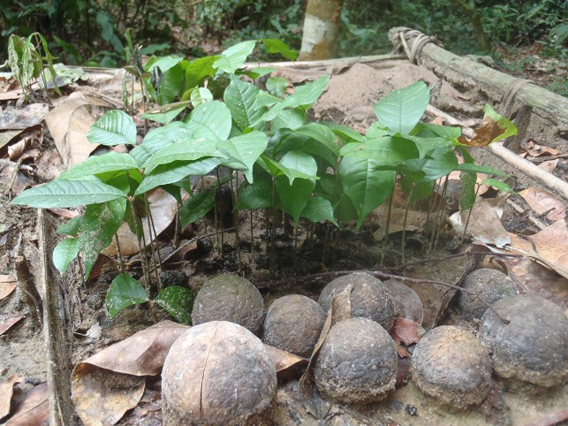 A nursery, including Poga oleosa, an elephant dependent tree, in front. Photo by: David Beaune. 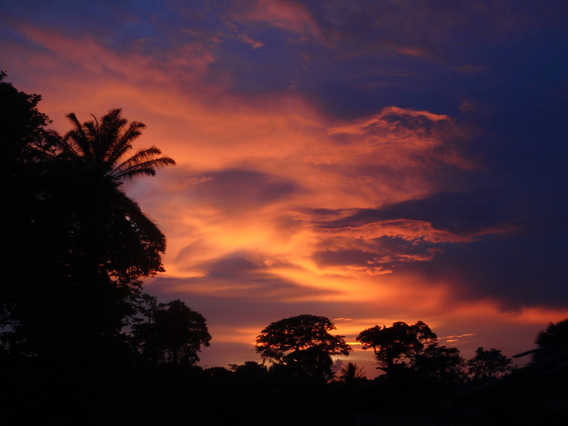 Sunset over the Congo rainforest. Loss of elephants could change the entire structure of the forest. Photo by: David Beaune.