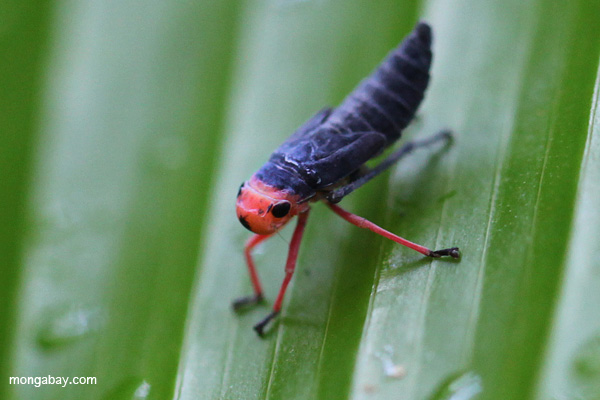 Deforestation could increase the risk of biodiversity loss in the Amazon by forcing species to migrate further in order to remain at equilibrium with changing climates, says new research.

“As migration models are made more realistic through the inclusion of multiple climatic, biotic, abiotic and human factors, the predicted distances between current and future climate analogues invariably increases,” Kenneth Feeley, lead author of the paper published in Global Change Biology and professor of Biology at Florida International University, told mongabay.com.

Species migrations in response to climate change have already been observed in many taxonomic groups worldwide, such the 48 Finish butterfly species that were recently found to have shifted their range northwards on average by 59.9 km. But such migrations will not only happen in the northern hemisphere. Experts predict that by 2100, distances to future equivalent temperatures will exceed 1,000 kilometers for much of the lowland Amazon rainforest. This will require annual migration rates of at least 10 kilometers for any species or populations requiring specific thermal conditions. It remains uncertain if many Amazonian species will be able to keep pace with future climate change.

But keeping pace is especially challenging in tropical lowland rainforests due to high rates of deforestation. Fifteen percent of the Amazon rainforest has already been lost to deforestation; under business-as-usual scenarios, this is predicted to increase to nearly 50 percent by 2050.

“By incorporating deforestation as a barrier to migration, distances increase to a point that they become far greater than the migratory capacity of most organisms,” Feeley explains.

Deforestation can also directly influence climatic conditions. It can change the microclimate along forest edges, and can increase distances between suitable habitat patches for species, making migrations even longer.

Kenneth Feeley and Evan Rehm, co-author of the paper, calculated the distances between areas in the Amazon forest and nearest future climate equivalents by 2050. Even under the most sanguine climate change scenarios, the distance between areas in the Amazon rainforest and their closest future climate equivalent was nearly 300 kilometers. But if precipitation is included migration-distances increase to 475 kilometers.

“If deforested areas also act as a barrier to species movements nearly 30 or 55 percent of the Amazon will effectively have no climate analogs,” wrote the scientists in the new paper in Global Change Biology.A climate analog describes sites that have similar climatic conditions for a given species. The researchers say these disappearing climates will be concentrated primarily in the southeastern Amazon.

Much of the Amazon will continue to have climate analogs that are technically reachable. However, these will be so far away that they will be effectively non-existent. Mean species migration rates observed in most systems and taxonomic groups studied to date is fewer than 2 kilometers annually. Even the very fastest observed modern species migration rates are less than 15 kilometers a year.

“There is strong evidence that long distance species migrations have occurred in response to past climate change, but in these cases migration speeds are believed to have been at least an order of magnitude slower than what is required to track the current changes in climate,” warned Feeley.

There is a glimmer of hope. If deforestation does not continue business-as-usual, and is reduced due to effective governance and increased conservation measures, the amount of Amazon rainforest with no reachable future analog will halve to 30 percent.

“As the extent and intensity of human impacts increase throughout the Amazon basin, the number and size of occurrence of migration will increase, further increasing the migration distances required for species to keep pace with climate change,” Feeley told mongabay.com. “If we focus conservation efforts on areas that are predicted to have climates suitable for rainforests in the future, such as the cooler slopes at the eastern base of the Andes, then at least we can help ensure that species have an area to migrate to.”

Wildlife corridors have been effective in increasing the movement of individuals through fragmented landscapes. But the effectiveness of corridors becomes debatable when the scale of migrations required to keep pace with future changes in climate is considered. Moreover, it is unclear if animals would migrate to new areas that potentially have different habitat structures.

“Would animals move into a forest that has a completely different assemblage of species, fruit, nesting area, cover, predators, competitors? Or would they only restrict movement to areas of forest similar to which they are adapted? If this is the case, then a sort of paradox may be created in which the migration of seed dispersing animals is dependent on the movement of the tree species they disperse,”,explained Feeley.

A second conservation strategy, complimentary to migration corridors, is the reforestation of previously cleared areas. Forests create their own climates and can slow climate change at both local and regional scales. By creating large reforestation projects it may be possible to provide suitable habitat for migrating species as well as refuges for the species already present in the area.

“If reforested areas are positioned in strategic areas within a non-forested matrix then these reforested plots may become nucleating foci for future forest expansion, or be used as stepping stones for migrating species,” said Feeley, adding, “There is still hope for the Amazon.”

(02/01/2013) The rate of tree mortality in the Amazon rainforest due to storm damage and drought is 9-17 percent higher than conventionally believed, reports a study published in the Proceedings of the National Academy of Sciences (PNAS).

(01/31/2013) A new series of short films is celebrating the innovation of rural farmers in the Manu region of Peru. Home to jaguars, macaws, and tapirs, the Manu region is also one of the top contenders for the world’s most biodiverse place. It faces a multitude of threats from road-building to mining to gas and oil concessions. Still the impact of smallscale slash-and-burn farming—once seen as the greatest threat to the Amazon and other rainforest—may be diminishing as farmers, like the first film’s Reynaldo (see below), turn to new ways of farming, ones that preserve the forest while providing a better life overall.

(01/29/2013) A judge in Guyana’s high court has ruled that indigenous groups do not have the right to expel legal miners from their land. The judge, Diana Insanally, found that if the miners in question held a government-approved license than the local community had no right to dispute the mining. The ruling has sparked protests by indigenous groups and is expected to be appealed.

(01/28/2013) Bolivia has passed a land use law that aims to boost food security and slow deforestation in a region that is wracked by illegal forest clearing. Approved earlier this month, Ley 337 seeks to regulate land use in the Bolivian Amazon where deforestation for industrial agricultural production is surging. The law requires landowners who illegally deforested land prior to 2011 to either reforest or establish ‘productive agriculture’ on the land and pay reduced fines for past transgressions.

Brazil to inventory the Amazon

(01/27/2013) Brazil will launch a comprehensive inventory of trees in the Amazon rainforest for the first time in more than 30 years, reports BBC News.

(01/24/2013) Illegal loggers beware: trees will soon be calling—literally—for backup. The Brazilian government has begun fixing trees with a wireless device, known as Invisible Tracck, which will allow trees to contact authorities after being felled and moved.