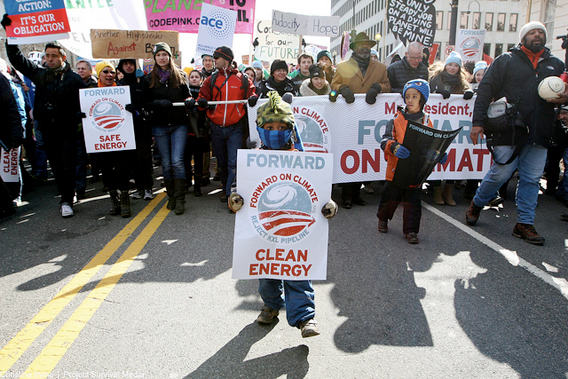 Yesterday over 35,000 people rallied in Washington D.C. for urgent action on climate change, which, according to organizers, was the largest climate march in U.S. history. Activists called on the Obama Administration to do much more to tackle climate change, including rejecting the Keystone XL Pipeline, which would bring carbon-heavy tar sands oil from Canada through the U.S. to a world market.

“For 25 years our government has basically ignored the climate crisis: now people in large numbers are finally demanding they get to work. We shouldn’t have to be here—science should have decided our course long ago. But it takes a movement to stand up to all that money,” said Bill McKibben, founder of the climate activist group 350.org, at the rally. McKibben called the tar sands in Alberta, Canada, “one of the largest carbon bombs in history.”

There is considerable debate about how much higher carbon emissions are from tar sands oil, but no one doubts that they are larger. Cambridge Energy Research Associates (CERA) estimated the greenhouse gas emissions of the tar sands was 5-15 percent higher than conventional sources, while the International Energy Agency (IEA) found that emissions were 20 percent higher. However, recent research has shown that the destruction of boreal forest and peatlands adds considerable more carbon emissions to the controversial fuel source. In fact, one study estimated that if the entirety of the tar sands were exploited it would raise global temperatures 0.64 degrees Fahrenheit (0.36 degrees Celsius), representing about 45 percent of how much the world has already warmed since the Industrial Revolution.

The rally took place less than a week after U.S. President, Barack Obama, noted in his State of the Union speech that, “For the sake of our children and our future, we must do more to combat climate change.”

Since winning re-election last November, Obama has become increasingly outspoken on the need to tackle climate change, including connecting the warming planet to recent disasters, such as drought in the Southwest and Hurricane Sandy last fall. Still, no one knows what the Obama Administration will decide on the Keystone Pipeline. Proponents of the pipeline, which include 52 U.S. Senators, say it will add jobs (though most will be temporary) and bring oil from a friendly neighbor instead of the Middle East.

But the exploitation of the tar sands has done even more than raise global carbon emissions. It is also responsible for significant pollution in Canada, spreading carcinogenic pollution in the Athabasca River and allegedly spiking cancer rates among locals. It has also been blamed for forest destruction and wildlife declines.

“We see the threat of taking tar sands out of the Earth and bringing it through our territories and over our rivers,” Chief Jacqueline Thomas, former Chief of the Saik’uz First Nation in British Columbia and co-founder Yinka Dene Alliance (“People of the Earth”). “The harm being done to people in the tar sands region can no longer be Canada’s dirty secret. We don’t have the billions of dollars that industry has. But we do have our faith that people will do the right thing to protect Mother Earth.”

“This President has the power to achieve the single biggest carbon reduction ever, by holding our biggest carbon polluters—dirty power plants—accountable for what they dump into the air,” said Van Jones, President of Rebuild the Dream and former Obama advisor. “Cleaning up this pollution and using more clean energy will provide jobs to thousands of Americans, save families real money when it comes to electricity bills and, most important, will make a real difference in our health and the health of our children.”

The exploitation of the tar sands has also been blamed for what is widely seen as Canada’s transition from a leader on climate change to an obstructor at international negotiations, including abandoning the Kyoto Protocol. Some have even gone so far as to call Canada a new “petrol state,” which has muzzled scientists, shuttered research, and labeled environmentalists, “foreign radicals.” 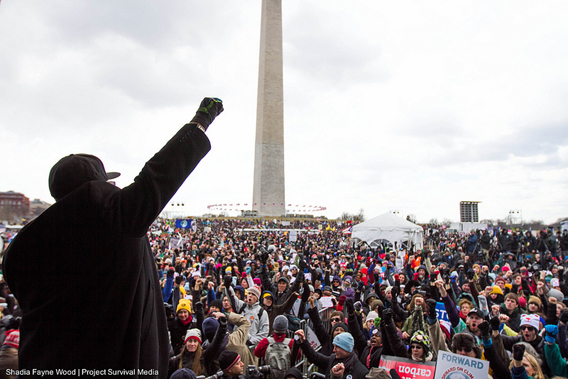 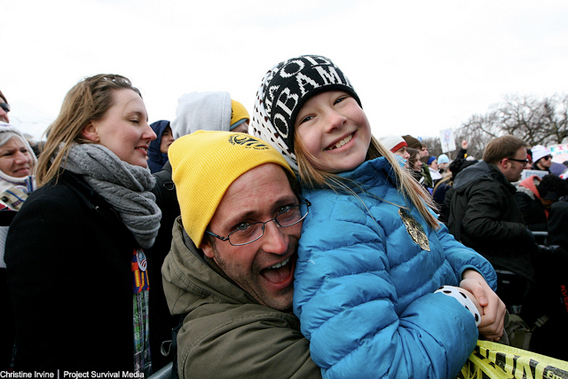 All ages joined in the rally. Photo by: Christine Irvine/Project Survival Media. 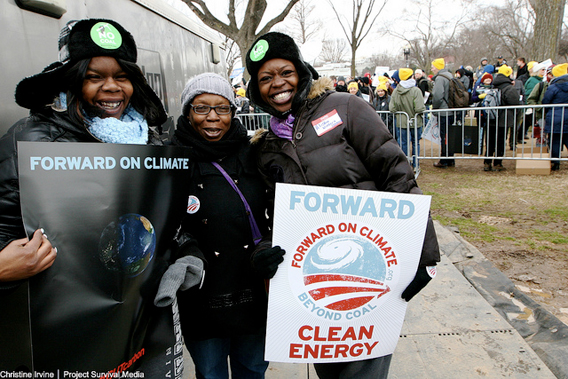 All ages joined in the rally. Photo by: Christine Irvine/Project Survival Media.

(02/13/2013) After several years of silence on climate change, U.S. President Barack Obama has begun speaking out following his re-election last November. The President surprised many by giving climate change a central role in his inauguration speech last month, and he followed-up in his State of the Union speech last night when he called on congress to “pursue a bipartisan, market-based solution to climate change,” but added that the administration would take action itself if congress failed.