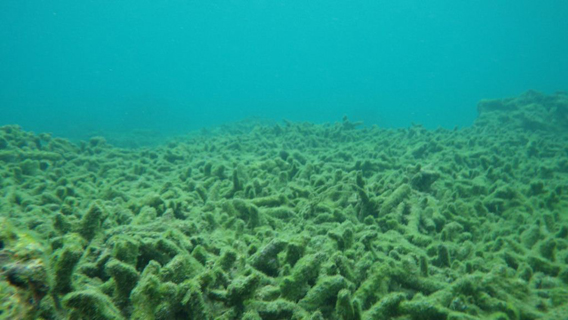 Three weeks after Typhoon Bopha: all the Acropora coral species are dead and covered in algae and sediment. Photo courtesy of ESI.

When Typhoon Bopha, also known as Pablo, ran ashore on Mindanao, it was the largest tropical storm it ever hit the Philippine island. In its wake the massive superstorm left over 1,000 people were dead and 6.2 million affected with officials saying illegal logging and mining worsened the scale of the disaster. However, the Category 5 typhoon also left a trail of destruction that has been less reported: coral reefs.

“At our sites coral species exposed to the typhoon have been destroyed, broken, and displaced,” Pierre Fidenci, the head of Endangered Species International (ESI) told mongabay.com. “Some young massive species have been turned down and displaced by the intense underwater movement. It is incredible to see the damages, we often look at land damages, but underwater ones are massive. We have found that young corals, especially the one recovering from past human impacts (fishing and sedimentation) have been completed wiped out after the typhoon.”

The ESI has found that 80 percent of coral cover has been lost at two of the sites they monitor—out of five across the Coral Triangle. Fidenci notes that delicate coral, such as those in the Acropora and Millepora genus, were most particularly impacted, while stony coral, like Porites, fared better.

“The waves generated by typhoons are so large and powerful [they can change] coral reef ecology and morphology. Injuries to corals include breaking coral branches, overturning colonies, and more dramatic, destroying coral,” he says.

Scientists say that while climate change may not be increasing the total number of tropical storms, it is likely spawning more severe hurricanes and typhoons. Already climate change is seen as a existential threat to coral reefs due to ocean acidification and rapidly rising marine temperatures. But the potential impact of superstorms on reefs has not been widely reported.

Given the number of threats to coral reefs—including overfishing, disease, pollution—Fidenci fully expects a number of coral species to fall into extinction this century.

“If we had only hurricanes or typhoons to deal with, then that would be OK, but there are a myriad of human induced impacts beyond global warming that we have to address very seriously and quickly if we want to have coral reefs around.”

Fidneci, who has spent years working in the Philippines, says that the Filipino government has still not taken to heart the lessons of Typhoon Bopha.

“The government continues to allow coastal destruction and construction along sensitive coastlines, and encourages population growth. Further, lack of massive reforestation programs means that such disastrous events will be repeated soon!” he warns.

Sometimes called “the rainforests of the sea,” coral reefs are the most biodiverse ecosystems on Earth, harboring numerous well-known and more cryptic species.

A strong Porite species turned over by the typhoon. Photo courtesy of ESI. 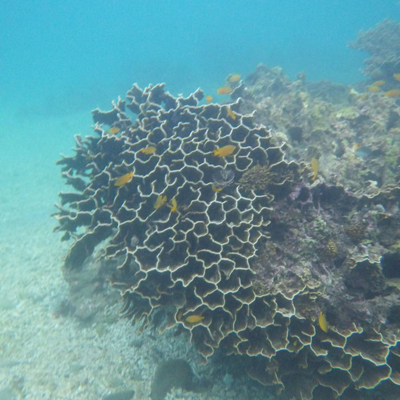 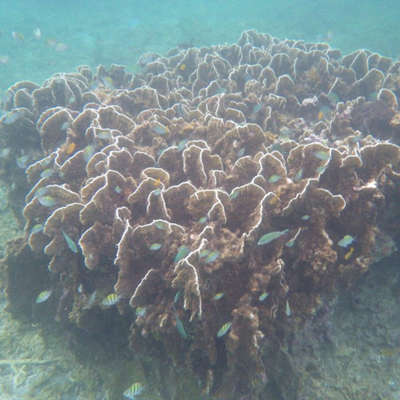 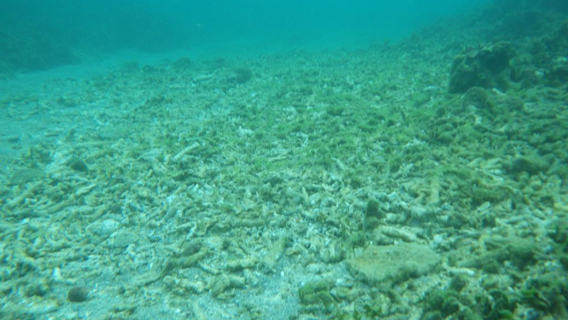 Another area completely impacted by the strong waves of the Typhoon Bopha. Photo courtesy of ESI.

(12/06/2012) According to Filipino officials, rampant illegal logging and mining were likely a part of the cause for the high casualty count from Category 5 Typhoon Bopha (Pablo), especially in the Compostela Valley where government officials had warned people to stop the illegal activities. So far, 370 people have been found dead on the island of Mindanao with another 400 missing. Waters rose so high even emergency shelters were inundated.