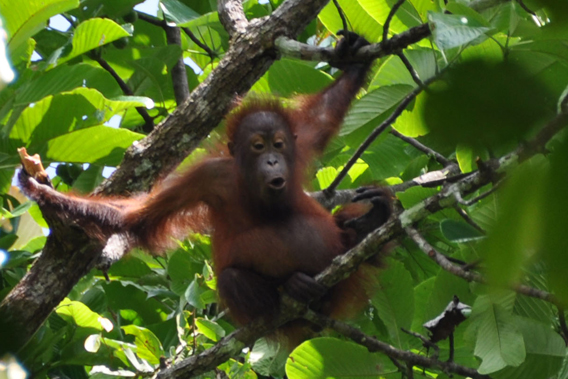 Juvenile orangutan in the Kulamba Wildlife Reserve, which, along with adjacent forests, supports an estimated 480 orangutans. Photo by: HUTAN/Dzulirwan bin Takasi @ Jolirwan.

“The extent of land area involved is quite small, yet keeping it as forest would add to the significance of the Kulamba Wildlife Reserve by retaining a dry land habitat adjacent to the 20,000 hectares of swamp forest protected in the Reserve,” WWF-Malaysia Executive Director Dionysius Sharma said.

WWF-Malaysia along with local NGOs, HUTAN and Land Empowerment Animals People (LEAP), call on the state government to follow its Orangutan Action Plan, which states that all forests with “significant orangutan populations […] must not be converted to industrial trees or agricultural plantations.”

Orangutan expert and co-founder of HUTAN, Marc Ancrenaz says that the dry forest is important for the orangutans in Kulamba since its trees have different fruiting seasons than those found in the protected area.

“Loss of forest in this area would inevitably push down the carrying capacity for orangutans,” says Ancrenaz. The forest in question has been logged, but the conservation groups say that a replanting initiative could help it recover. In addition, past research on orangutans has shown that the great apes can still thrive in secondary forest. The forest is also notable as one of the last standing dry forests in the region.

Cynthia Ong, the head of LEAP, notes that if the forest clearing goes ahead it could undercut positive efforts made by some in the palm oil industry.

“Malaysia is gradually strengthening its reputation as a responsible producer of palm oil, through various transparent processes such as the Roundtable on Sustainable Palm Oil (RSPO),” she says. “It would be a shame if known orangutan habitats continue to be cleared to plant oil palm, now that we see some resolution of the previously acrimonious debate between NGOs and the palm oil industry.”

Bornean orangutans are currently listed as Endangered by the IUCN Red List. The total population is believed to have been cut in half in the last 60 years, largely due to vast deforestation across the island of Borneo; but poaching, fires, and the illegal pet trade have also taken their toll. Their close-cousin, the Sumatran orangutan (Pongo abelii), is in even more dire straits. Listed as Critically Endangered, their population has fallen by 80 percent in 75 years.

The palm oil industry has long been a target of environmental activists for its role in record forest loss across Malaysia and Indonesia. Between 1990 and 2000, 86 percent of deforestation in Malaysia was for oil palm plantations. Research has shown that between 80-90 percent of tropical forest species do not survive in the plantations that now cover portions of Southeast Asia. The Roundtable on Sustainable Palm Oil (RSPO) was created in 2004 to address both environmental and social issues connected to oil palm plantations.

Rehabilitated orangutans in danger if industrial project proceeds in Borneo

(10/22/2012) The proposed extension of an industrial area in East Kalimantan, Indonesia will likely mean the end of a population of rehabilitated orangutans who reside there, according to the Indonesian environmental group Peduli Teluk Balikpapan. The Kariangau Industrial Area (KIK) will comprise 5,130 hectares of land currently covered by hardwood forests and mangroves when completed, including one third of orangutan habitat in Sungai Wain forest—a crucial portion that is not within the boundaries of the Sungai Wain Protection Forest and therefore not under any governmental protection.