Deforestation in neighboring Brazil. Photo by Rhett A. Butler

Bolivia has passed a land use law that aims to boost food security and slow deforestation in a region that is wracked by illegal forest clearing.

Approved earlier this month, Ley 337 seeks to regulate land use in the Bolivian Amazon where deforestation for industrial agricultural production is surging. The law requires landowners who illegally deforested land prior to 2011 to either reforest or establish “productive agriculture” on the land and pay reduced fines for past transgressions. The stated goal is to boost Bolivia’s low agricultural productivity, which lags the rest of Latin America, and has exacerbated deforestation and been blamed for the need for occasional food imports.

According to Bolivian government projections, the area of agricultural production in Santa Cruz Department alone will increase from 1.1 million hectares to 1.7 million ha by 2018. The measure thus aims to encourage expansion in already deforested areas, rather than driving new forest conversion, although it doesn’t establish criteria for prioritizing areas according to best use.

However the effectiveness of the law is still far from certain. Governance is virtually non-existent in parts of the Bolivian Amazon. Laws are selectively enforced — for example a prohibition on genetically modified (GMO) soy is widely ignored — and corruption is rampant. Further, by reducing fines for past illegal deforestation, the state is effectively forgoing potential revenue that could have paid for law enforcement under the country’s Forestry Act 1700. Bolivia lacks the advanced deforestation monitoring system used in neighboring Brazil to support efforts to crack down on illegal forest clearing. Its environmental police force is also understaffed and underfunded. 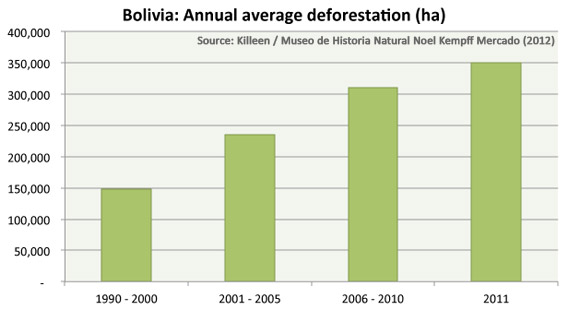 Bolivia’s deforestation rate has accelerated in recent years, rising from about 148,000 ha per year in the 1990s to 270,000 ha in the 2000s to 350,000 ha in 2011, according to research by WWF researcher Tim Killeen and the Museo de Historia Natural Noel Kempff Mercado. Large-scale agriculture, including cattle, soy, maize, rice, and sugar cane production, is the main driver of forest conversion.

Agribusiness is now a powerful lobby in Bolivia and in fact pushed for the new law, which was enacted shortly after the country’s Law of the Rights of Mother Earth went into effect. In the view of one conservationist, who spoke condition of anonymity for fear of jeopardizing his organization’s work on the ground in the region, Ley 337 can be viewed as the industrial agriculture lobby’s response to the “Mother Earth law”, which sets a high bar for environmental protection. He said Ley 337 carries environmental risks if not carefully implemented.

“If the goal of is to ensure not only food production but also conservation, monetary resources generated by fines should be directed towards the ‘mitigation and adaptation mechanism’ established for sustainable forest management in the Law of the Rights of Mother Earth,” he told mongabay.com, adding that as currently construed, the law could encourage deforestation. “This bill would be an incentive to future deforestation, as it can create the expectation of future pardons to illegal deforestation, especially if resources are used to promote productive use of illegally deforested land.”

“The negative incentives are clear because the established fines per hectare are very low [$10 to $60 per ha] considering the profitability of the agricultural and livestock production in the region. Probably a large majority of produces will prefer to pay, formalize and produce.”

Better management and enforcement would facilitate both increased food production and reduction in deforestation, added another conservationist, who also asked to remain anonymous.

“If deforestation was limited to areas permitted by Land Use Plan, Bolivians will have enough arable land to meet the demand for food security, provided productivity rises,” he said. “The biggest driver of deforestation is the unproductive use of agricultural land in Bolivia.”

REDD at a crossroads in Bolivia

(11/30/2011) Bolivia has a central role in the debate over how to shape the reducing emissions from deforestation and degradation (REDD) mechanism, argues a new report published by the Democracy Center.