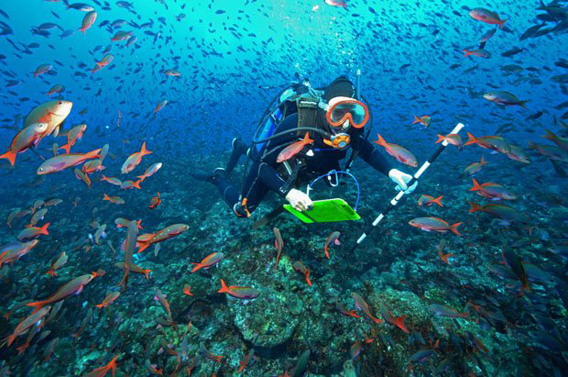 Coral surveying in a cloud of fish. Photo by: Joshua Feingold.

The Galapagos Islands have been famous for a century and a half, but
even Charles Darwin thought the archipelago’s list of living wonders
didn’t include coral reefs. It took until the 1970s before scientists
realized the islands did in fact have coral, but in 1983, the year the
first major report on Galapagos reef formation was published, they
were almost obliterated by El Niño. This summer, a major coral survey
found that some of the islands’ coral communities are showing
promising signs of recovery. Their struggle to survive may tell us
what is in store for the rest of the world, where almost
three-quarters of corals are predicted to suffer long-term damage by
2030.

The Galapagos are a tough place for coral to grow. Directly on the
equator in the eastern Pacific, the islands sit at the intersection of
five major ocean currents, both warm surface currents and cool, deep
currents. The result is a marine climate that changes rapidly from
island to island and season to season—not an ideal situation for
organisms that are especially sensitive to changes in water
temperature.

Nonetheless, in the 1970s researchers discovered that numerous places
in the 16-island archipelago did have coral, some of which had
accumulated into reefs, especially in the warmer waters around the
northernmost islands. Then, the unusually strong 1982-83 El Niño climate event brought
abnormally warm waters that killed over 90% of corals in parts of the
Galapagos. (Warm waters cause corals to lose their
crucial symbiotic algae, which causes bleaching and leaves them more
prone to disease.) Another strong El Niño in 1997-98 threatened to
seal their fate, but some managed to survive.

In June, a team of researchers with the Khaled bin Sultan Living
Oceans Foundation’s Global Reef Expedition, a 6-year survey of coral
reefs worldwide, spent 18 days aboard the Golden Shadow research
vessel in the Galapagos, surveying the corals of 8 islands. They
wanted to see how the corals had recovered from the ravages of recent
decades, and what were the most important factors that made them
resilient to environmental disturbances.

“The Galapagos offered a unique field laboratory to help us better
understand how temperature extremes and increasing acidity will affect
the survival and growth of reef building corals in the future,” says
Andrew Bruckner, chief scientist for the expedition.

Overall, the team found hopeful signs of coral recuperation at
three northern islands: Marchena, Wolf and Darwin. “That’s
encouraging,” says team member Peter Glynn, co-author of the 1983
treatise. “The southern islands, though, are showing very little in
the way of recovery to pre-1983 levels. On the other hand, the most
common large corals were surprisingly abundant in the central and
southern islands, even though they weren’t aggregated into reefs.”

Team member Derek Manzello of NOAA was looking at how the relatively
higher levels of carbon dioxide (CO2) in the waters around the
Galapagos affected coral growth rates. The islands owe their wealth of
marine life to the deep, cold currents that bathe them in nutrients
brought up from the ocean depths. These same currents also bring high
amounts of CO2, a byproduct of decomposition. This situation could
make the islands a window into the future of reefs around the world,
since about a quarter of the CO2 we’ve produced in the past century
has ended up in the ocean, where it makes the waters more acidic.
Acidic waters weaken reefs by interrupting the creation of calcium
carbonate, the substance that provides their hard structure.

Manzello found CO2 levels in the northern islands were about 40
percent higher than they were in preindustrial times, based on samples
taken from ice cores, which is similar to levels researchers are
finding throughout the tropics. In comparison, CO2 levels around the
southern islands have roughly doubled since the industrial revolution,
which could explain why corals there are not recovering as well as
they are farther north.

Another member of the expedition, Iliana Baums of Penn State
University, examined how two similar species of reef-building coral
reproduce, and how this depends on the reef community surrounding
them. Porites lobata reproduces sexually, by releasing sperm and/or
eggs into the water, which are carried off to found new coral. Its
identical-looking relative Porites evermanni often reproduces
asexually, which can happen when pieces break off—in its case, from
certain species of triggerfish biting off pieces of coral in search of
mussels that live inside—and form new corals nearby. Asexual
fragmentation is limited to the immediate vicinity, while sexual
reproduction can “reseed” new coral communities over much longer
distances. In the Galapagos, the mussels are common but the right
species of triggerfish isn’t. Baums found that fragmenting Porites
evermanni doesn’t grow there as often, possibly because they need the
fish to reproduce. So climate change could affect the coral not only
by raising the water temperature, but also by how it affects the
mussels and fish directly.

The Global Reef Expedition is a project
of the Khaled bin Sultan Living Oceans Foundation
in Landover, MD. The goal is to
survey and map remote coral reefs, often in countries who aren’t able
to do it themselves, to help identify high-priority sites for
protection. Local scientists team up with researchers brought in by
the foundation, which assumes all the costs. All data and maps are
turned over to the host countries at the end of each mission.

The expedition started its 6-year mission last year in the Caribbean,
surveying reefs in the Bahamas, St Kitts & Nevis, Jamaica, Navassa,
Colombia and the Galapagos. The Golden Shadow is currently in the
South Pacific, and will work its way west around the globe until 2017. 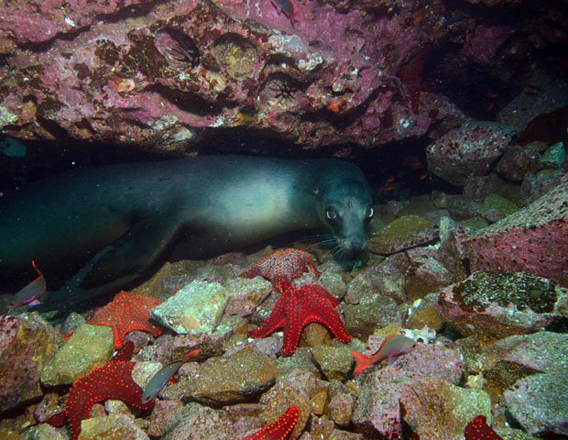 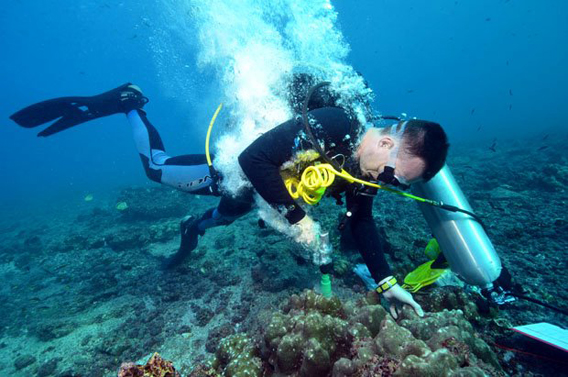