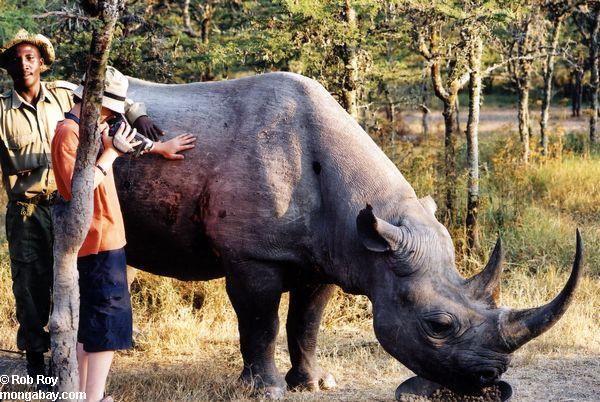 These numbers illustrate a devastating trend that paints a foreboding picture for South African rhinos, as depicted in a new report by wildlife monitoring group TRAFFIC.

The steep increase in rhino poaching in Africa, and especially South Africa, is due to a growing demand for the commodity in Vietnam, a nation whose economy, and affluence, is on the rise. Basking in the prosperity of their up-and-coming economy, Vietnamese consumers are increasing their consumption of luxury products, including illegal rhinoceros horns, which are popular in local luxury commodity markets as holistic remedies. Fueled by this fervor,
Vietnam’s last wild rhino was poached in 2010, rendering the Javan subspecies extinct from the nation.

Data and information on rhino conservation on the South African side abound. South Africa has become a primary target for poachers because it boasts the greatest success record for rhino conservation of any country in the animal’s range. Many populations of rhinos have become extinct in regions of their historical, former range. Traditionally, hunting in South Africa has been utilized as a management tool to help expand the range of populations and generate revenue for local economies and conservation initiatives. An insurgence in poaching, however, and the recent rise of rhino horn dealers posing as legal big game hunters, has put a significant dent in South Africa’s rhino populations. A recent report by TRAFFIC details the severity of the crisis, documents its stimuli, identifies key players, and offers recommendations to curb the slaughter.

Big game hunting in South Africa is a pastime most often enjoyed by American and European sportsmen and women. Since 2003, however, there has been a marked increase in the proliferation of “non-traditional” hunters, mostly in the form of Vietnamese nationals. Clever rhino-horn traffickers disguise themselves as sportsmen in order to harvest rhino horns and have been coined “pseudo hunters.” Since 2005 the presence of pseudo hunters on the South African trophy-hunting scene has been on the rise and accounted for nearly 50% of harvests by international hunters. Their numbers increased so much that in 2012 South Africa’s Department of Environmental Affairs made a motion to cease granting permits to Vietnamese hunters in hopes of abating the trend.

Rhino killing is being made easier by more than just Vietnamese traders posing as hunters; loopholes in hunting regulations, corrupt wildlife industry workers, and more sophisticated hunting techniques have all contributed to the crisis. Startlingly, poachers and pseudo-hunters are not the only ones capitalizing on the insatiable appetites of Vietnamese commodity-seekers. Handsome payouts for rhino horns have lured wildlife industry workers and game managers into corruption. An increase in the use of sophisticated weapons and live animals being dehorned using immobilization techniques indicates cooperation on the part of veterinarians, game ranch owners, and professional hunters.

Much to the chagrin of conservationists, little is being done on the Vietnam side to curb the trafficking of rhino horns into illegal markets. Poachers and traffickers face little risk of prosecution as enforcement in Asian markets is lacking. The systematized syndicate of rhino hunters is a tightly-woven blanket of traffickers, middle men, buyers, and crime lords.

In South Africa, however, forces are fighting back. The South African National Wildlife Crime Reaction Unit has developed a systematic framework to parse out the relationships between the primary providers (poachers), the climax consumers (buyers), and the sundry ‘middle men’ (couriers, informants, exporters, and importers) in between. Among South African political deliberations, rhino crimes have become an elevated priority and officials have combated the assault with an armory of new regulations, stiff penalties for law-breakers, anti-poaching units, and an optimistic outlook for the future.
As people are becoming informed about the crisis both locally and globally, support for anti-poaching endeavors is beginning to pay off. Thanks to government support and the involvement of multiple players in the conservation arena, monitoring technology has been upgraded and communication and cooperation between stakeholders has improved which has resulted in a twofold increase in arrest rates of poachers since 2011.

TRAFFIC’s media coordinator Richard Thomas tells mongabay.com that “the CITES (Convention on International Trade in Endangered Species) Standing Committee instructed the CITES Rhino Working Group to focus on actions needed to reduce demand for rhino horn and was tasked with developing a demand reduction strategy.” They are currently developing this strategy to moderate demand in Asian markets.

Despite some progress in South Africa, however, the authors of the TRAFFIC report contend that the only hope for rhino poaching to be curbed is for the crisis to be addressed at all levels—from source to sink—beginning with hunters on the ground in South Africa all the way to buyers in Asian markets.

Composed of keratin, rhino horns are a fibrous structural protein present in many types of vertebrate body tissues. Hair, skin, nails, hooves, claws, horns, feathers, beaks, and quills all have keratin components. Traditionally, powdered rhino horn was used in Chinese medicine as a curative and tonic for fevers and convulsions, but these myths have been dispelled through sound scientific research. The recent fad in Vietnamese culture has embraced its therapeutic powers in a novel way. There is a sundry collection of rhino horn consumers that motivate the market, but the two principle groups are those who believe rhino horns have cleansing/detoxifying properties and use the horn as a remedy for overindulgence, and those who believe the horn has special healing properties and can cure them of diseases and ailments, particularly cancer. The latter group has been unscrupulously targeted, as terminally-ill cancer patients are desperate for a cure and willing to pay exorbitant prices for rhino horns.

Kids campaign to save South Africa’s rhinos from poaching

(08/09/2012) The young founders of the U.S. conservation group, One More Generation (OMG), have taken on a new task: halting rhino poaching in South Africa. After a trip last year to visit South Africa, Carter Ries (age 11) and Olivia Ries (age 9), have jump-started a campaign to help convince the South African government to put more resources into halting a rhino poaching plague in the country. Last year an astounding 448 rhinos were killed in South Africa for their horns, averaging more than one rhino a day.