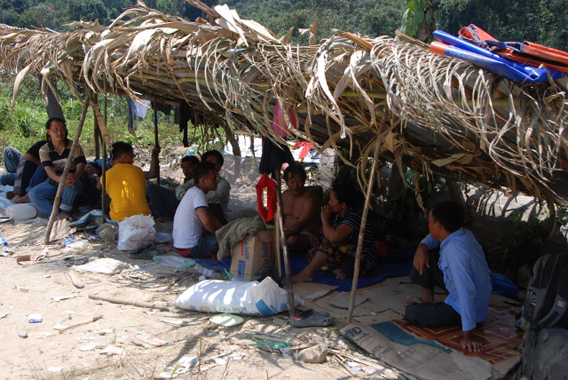 Over 300 Penan people are living in makeshift shelters as they blockade roads to the Murum dam construction site. Photo courtesy of Sarawak Conservation Alliance for Natural Environment (SCANE).

Indigenous people have expanded their blockade against the Murum dam in the Malaysian state of Sarawak, taking over an additional road to prevent construction materials from reaching the dam site. Beginning on September 26th with 200 Penan people, the blockade has boomed to well over 300. Groups now occupy not just the main route to the dam site, but an alternative route that the dam’s contractor, the China-located Three Gorges Project Corporation, had begun to use.

“The major works on the construction of the dam have been paralyzed over the last one week. The drivers have left home and let their cement tankers, lorry trucks and trailers with building materials had been hauled over and park at the road side near the blockade site,” the Sarawak Conservation Alliance for Natural Environment (SCANE) said in an update on the blockade. “The access to the construction site of Murum hydroelectric dam project is totally blocked on all directions with the setting-up of second road blockade by the Penans.”

The Penan are protesting what they say has been disdainful treatment from the government-owned corporation overseeing the 900 megawatt dam project, Sarawak Energy Berhad (SEB). The dams construction, which will inundate 24,500 hectares of native land, will lead to the involuntary resettlement of seven indigneous communities, who still remain in the dark about many of the details of the resettlement plan. In addition, the tribe alleges that SEB has been intentionally destroying important sacred and historical sites.

“We will not remove the blockade or move out of here until our demands are resolved and fulfilled by the government,” Labang Paneh, a representative from Long Wat village, said in a statement.

Families, including elderly and children, have set up makeshift camps near the blockade and appear to be in it for the long haul.

A government minister spent two days with the Penan investigating the blockade and speaking with them about their grievances.

“I went in and I saw the situation from the view of these Penans whose lives are being uprooted and whose future looks so uncertain,” Liwan Lagang, Sarawak Assistant Minister for Culture and Heritage, told The Star. “I found out that indeed, they had not been properly consulted and their concerns not addressed by those handling the construction of the project.”

For decades the Penan people have seen their customary forests felled for logging, plantations, dams, roads, and other big infrastructure projects with the Sarawak government refusing to recognize their land rights. Traditionally, the Penan were nomadic hunter-and-gatherers, but today most live in settled villages, but still depend on the forests for their livelihood.

Assistant Minister Lagang added that “contractors involved in the dam project are making millions of ringgit in the project. They must be considerate and exercise better social corporate responsibility and good public relations with the local affected natives.”

Sarawak already produces far more energy than the state uses leading critics to allege that numerous massive dam projects are merely means for corrupt officials to siphon off state funds and collect bribes. The state recently completed the 2,400 megawatt Bakun Dam, which produces double the energy consumed by Sarawak during peak times. Bakun resulted in the forced resettlement of 10,000 people. 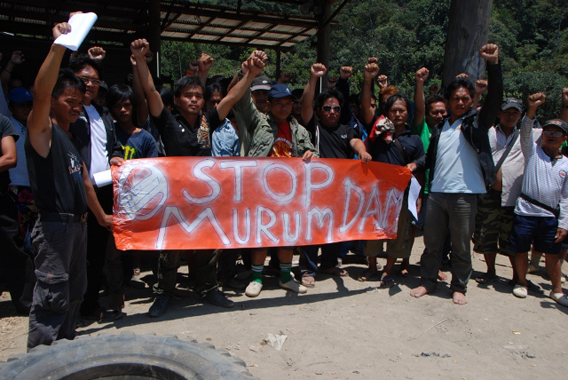 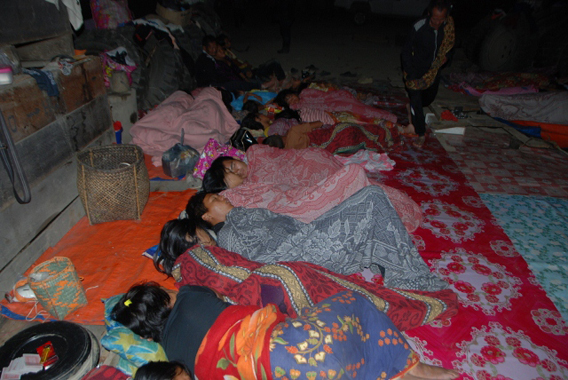 Building indigenous resilience in the face of land-grabbing, deforestation in Malaysian Borneo

(07/10/2012) In the 1980s images of loincloth-clad tribesmen blockading blocking logging roads in Malaysian Borneo shocked the world. But while their protests captured the spotlight momentarily, Borneo’s forests continued to be destroyed at rapid rates, undermining traditional communities that are dependent on these ecosystems for food, shelter, medicine, clean water, and spiritual inspiration. Nomadic tribes are now but a memory in Borneo, but other tribal groups continue to fight for their forests by seeking legal recognition of their lands and blocking destructive projects, including oil palm plantations, logging operations, and large-scale hydroelectric projects. Helping them is The Borneo Project, a Berkeley-based non-profit that works in partnership with indigenous communities and the small non-profits that support them.

(04/24/2012) Documents under investigation show that around $90 million may have been laundered from logging companies in Sabah to UBS bank accounts linked to high-ranking Malaysian officials, according to the Sarawak Report. Critics of the government say the money is likely kickbacks from logging companies to government officials for the right to log in the state’s declining rainforests. Such transactions are alleged to occur typically in the run up to elections.