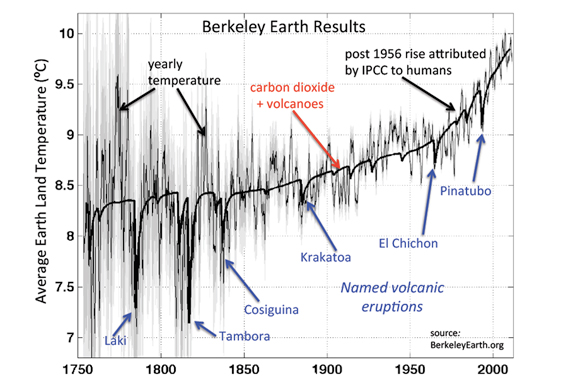 After starting his own project to study global warming, a once-prominent climate change skeptic and physicist says he now accepts the reality of anthropogenic climate change.

“Last year, following an intensive research effort involving a dozen scientists, I concluded that global warming was real and that the prior estimates of the rate of warming were correct. I’m now going a step further: Humans are almost entirely the cause,” Richard Muller writes in the New York Times as his team, the Berkeley Earth Project, releases a new paper that finds an even stronger link between greenhouse gas emissions and rising temperatures worldwide than the Intergovernmental Panel on Climate Change (IPCC).

According to the paper, which hasn’t been peer-reviewed yet, global land temperatures have increased 0.83 degrees Celsius (1.5 degrees Fahrenheit) in the last 250 years. The team further found solar activity had a negligible impact on global temperatures, but influxes of carbon into the atmosphere explained temperature changes precisely.

“I was not expecting this, but as a scientist, I feel it is my duty to let the evidence change my mind,” Muller says in a press release, adding that,
“To be considered seriously, any alternative explanation must match the data at least as well as does carbon dioxide.”

To date, numerous alternate explanations for current climate change have been tried and tossed out, leaving carbon dioxide as the decisive cause. Human emit carbon largely by burning fossil fuels for energy—such as coal, oil, and natural gas—but also through deforestation, land use changes, and industrial agriculture.

The Muller team also found that volcanic eruptions explained sudden dips in the temperature record. By spewing light-reflecting particles into the atmosphere, volcanoes are capable of briefly cooling the Earth.

“I am glad that Muller et al have taken a look at the data and have come to essentially the same conclusion that nearly everyone else had come to more than a decade ago,” climatologist Ken Calderia at Stanford told Climate Progress. “The basic scientific results have been established for a long time now, so I do not see the results of Muller et al as being scientifically important. However, their result may be politically important. It shows that even people who suspect climate scientists of being charlatans, when they take a hard look at the data, see that the climate scientists have been right all along.”

Climatologists have long been making the case that the world needs to rapidly cut greenhouse gas emissions in order to stave off catastrophic climate change, yet emissions continue to rise and carbon dioxide concentrations in the atmosphere hit 400 parts per million (ppm) for the first time in the Northern Hemisphere this year.

For his part Muller says the debate over climate change needs to move from questioning the science to deciding how to proceed.

“I hope that the Berkeley Earth analysis will help settle the scientific debate regarding global warming and its human causes,” he writes in the New York Times. “Then comes the difficult part: agreeing across the political and diplomatic spectrum about what can and should be done.”

(07/03/2012) Fossil fuels were not burned in massive quantities prior to the Industrial Revolution, but humans were still pumping carbon into the atmosphere due to land use change, especially deforestation. In fact, a new study in Environmental Research Letters finds that deforestation prior to 1850 is still heating up our atmosphere today.