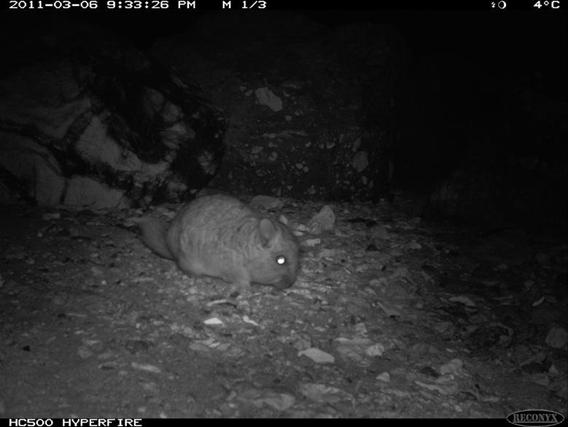 The short-tailed chinchilla (Chinchilla chinchilla) once inhabited a range including the mountainous regions of Argentina, Bolivia, Chile and Peru, but today the species survives in only a handful of areas in northern Chile and Argentina. Worse still, evidence of the Argentinean populations is restricted to remains discovered in the droppings of their natural predators. But, since 2011, Pablo Valladares from the University of Tarapaca in conjunction with the National Forestry Corporation of Chile (CONAF) has been searching Tres Cruces National Park for previously undocumented populations, and it has finally paid off: Valladares and colleagues discovered two new colonies with remote camera traps.

Prized for its ultra-soft fur, the short-tailed chinchilla has undergone an exponential decline since Spanish settlers began large-scale harvesting operations. Though they were hunted by the Inca and other local people in pre-Columbian times, commercial export began in 1828 and peaked in intensity between 1885 and 1910, with an average export rate of a quarter million pelts per year. But by 1917, due to increasing overexploitation, exports dropped off to almost nothing.

In 1924, a total of eleven short and long-tailed chinchillas (Chinchilla lanigera) were captured from their high desert habitat and shipped live to California, where the now worldwide practice of chinchilla farming was first developed. Though the fur of their hybrid ancestors continues to be sold across the world, and chinchillas have gained popularity as exotic pets, both species are extremely rare in the wild. No sightings occurred between 1953 and 1975, and only as recently as 2008 did the IUCN consider there to be sufficient data to update their status from Locally Extinct to Critically Endangered.

The team’s data will be used to help determine future conservation policy, and is a sign of hope for similar projects in other parts of the chinchilla’s historical range.

NASA image shows it snowing in driest place on earth

(07/20/2011) A snowstorm engulfed parts of the driest place on earth this month: the Atacama desert in South America. Images captured by NASA’s Moderate Resolution Imaging Spectroradiometer (MODIS) on Terra Satellite show parts of the landscape covered in white.

(05/16/2011) The wild rivers of Patagonia may soon never be the same. Last week, Chile’s Aysén Environmental Review Commission approved the environmental assessment of a five dam proposal on two rivers. The approval, however, is marred in controversy and has set off protests in many cities, including Santiago. Critics say the series of dams will destroy a largely untouched region of Patagonia.

(09/28/2008) One of the world’s rarest cats is also one of its least known. The Andean mountain cat, sometimes called the “snow leopard” of the Andes, is an elusive species found only at high elevations of the Andean region in Argentina, Bolivia, Chile and Peru. Little is known about its ecology and behavior. While the species is known to be rare, no one knows how many individuals survive in the wild. Mauro Lucherini and his colleagues at the Andean Cat Alliance(AGA) are working to change this.